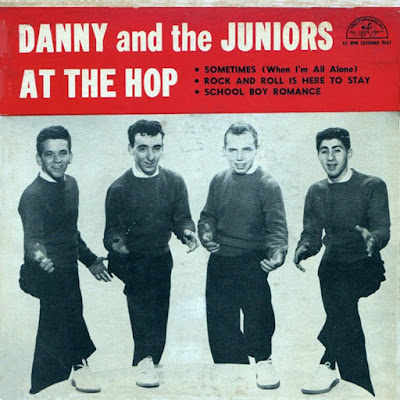 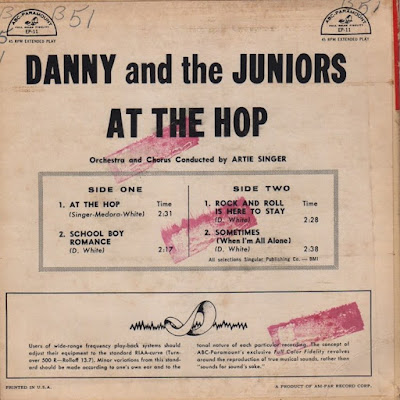 "At the Hop" is a rock and roll/doo-wop song written by Artie Singer, John Medora, and David White and originally released by Danny & the Juniors. The song was released in the fall of 1957 and reached number one on the US charts on January 6, 1958, becoming one of the top-selling singles of 1958. "At the Hop" also hit number one on the R&B Best Sellers list. Somewhat more surprisingly, the record reached #3 on the Music Vendor country charts. It was also a big hit elsewhere, which included a number 3 placing on the UK charts.

The song returned to prominence after it was performed by rock and roll revival act Sha Na Na at the 1969 Woodstock Festival and featured in the 1973 coming-of-age teen comedy American Graffiti. Musically, it is notable for combining several of the most popular formulas in 1950s rock'n'roll, the twelve-bar blues, boogie-woogie piano, and the 50s progression.

The original version by Danny & the Juniors was included in Robert Christgau's "Basic Record Library" of 1950s and 1960s recordings, published in Christgau's Record Guide: Rock Albums of the Seventies (1981).
The song was written by White, Medora, and Singer in 1957, when Danny & the Juniors were still called The Juvenairs. Initially called "Do the Bop", the song was heard by Dick Clark, who suggested they change the band name to the Juniors and the chorus from "Let's all do the Bop" to "Let's go to the Hop". After performing the song on Clark's show American Bandstand, it gained popularity and went to the top of the US charts, remaining at number one for five weeks.

The song describes the scene at a record hop, particularly the dances being performed and the interaction with the disc jockey host.

A sample of the song's lyrics (contemporary popular dances in italics):

You can rock it you can roll it
Do the stomp and even stroll it
At the hop.
When the record starts spinnin'
You chalypso and you chicken at the hop
Do the dance sensation that is sweepin' the nation
at the hop

On the 2008 nationally-televised PBS documentary Wages of Spin: Dick Clark, American Bandstand and the Payola Scandals, Singer claimed that Dick Clark would not play "At the Hop" without receiving half of the publishing proceeds. Singer agreed to make the payments and called the situation "bittersweet" because although he didn't like having to give the money, he credited his success in the music industry to Clark and therefore was grateful to him. Payola was not illegal at the time and Clark sold the song prior to the 1960 payola hearings.

Email ThisBlogThis!Share to TwitterShare to FacebookShare to Pinterest
tags Danny and The Juniors