Freddie And The Dreamers (Sing Along Party) 1965 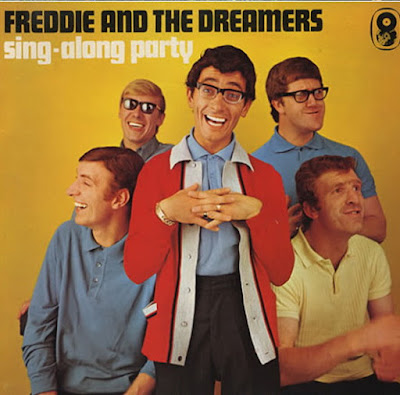 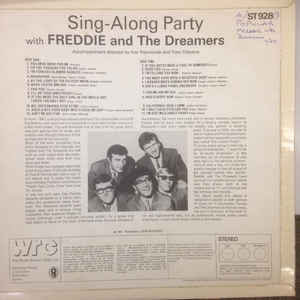 Freddie and the Dreamers were a British band that had a number of hit records between May 1963 and November 1965. The band's stage act was enlivened by the comic antics of the 5-foot-3-inch-tall (1.60m) Freddie Garrity, who would bounce around the stage with arms and legs flying. Freddie officially retired from all work in February 2001. He died in Bangor, North Wales, on 19 May 2006, aged 69.

Although the band was grouped as a part of the Merseybeat sound phenomenon that the Beatles exploded around the world in the wake of Beatlemania, they came from Manchester. Prior to becoming a singer, Garrity had worked as a milkman in Manchester.

Session guitarist Big Jim Sullivan played on a couple of the records,"I Understand", "A Little You", "Thou Shalt Not Steal" and "Just For You" ".

On stage the group performed pre-rehearsed, synchronised wacky dance routines. They appeared in four British films: What a Crazy World with Joe Brown, Just for You, Cuckoo Patrol with Kenneth Connor and Victor Maddern and Every Day's A Holiday (US title Seaside Swingers) with Mike Sarne, Ron Moody and John Leyton.

Between 1968 and 1973 Garrity and Birrell appeared in the UK ITV children's show Little Big Time, a zany music/talent/adventure show with audience participation.

The group made a guest appearance in the BBC sitcom Dear John.
In the 1980 Rolling Stone History of Rock & Roll, writer Lester Bangs paid tribute (of a kind) to the group:

Freddie and the Dreamers [had] no masterpiece but a plentitude [sic] of talentless idiocy and enough persistence to get four albums and one film soundtrack released ... the Dreamers looked as thuggish as Freddie looked dippy ... Freddie and the Dreamers represented a triumph of rock as cretinous swill, and as such should be not only respected, but given their place in history.

In an interview, Paul McCartney said that the Freddie and the Dreamers version of "If You Gotta Make A Fool of Somebody" was copied from an arrangement performed by the Beatles at a show in the Cavern. The Dreamers released their copied version of the song as a single, leaving the Beatles uncredited. Because of this incident, the Beatles decided to concentrate on their own compositions, rather than cover versions. The Beatles later forgave the Dreamers, and invited them to do a guest appearance in their 1964 Christmas Special.

Garrity retired in February 2001, along with his last Dreamers (Nick Foti, Simon Clarke and Alan Edmundson), due to pulmonary hypertension, and died on 19 May 2006. Drummer Dwyer died on 4 December 2002 from lung cancer; Birrell became a taxicab driver. Crewdson now runs Dreamers' Bar in Tenerife, while Quinn lives in Cheshire and is in the distribution business. Eamonn Carr heads the New Dreamers touring band. Nick Foti is to be seen playing all Freddie's hits and other sixties hits as Nico. Simon Clarke is also a solo act and emigrated to Canada in 2003. Alan Edmondson is a music teacher.

Freddie & The Dreamers -
Sing-Along Party
01  Medley: If You Gotta Make A Fool Of Somebody / Over You / I'm Telling You Now
02  Medley: You Must Have Been A Beautiful Baby / I Wonder Who's Kissing Her Now / She Was A Lass From Lancashire
03  Medley: For Me And My Gal / She's Sorry Now
04  Medley: California Here I Come / I Only Have Eyes For You / I'm Just Wild About Harry
05  Medley: You Were Made For Me / Tip-Toe Through The Tulips With Me / I'm Forever Blowing Bubbles
06  Medley: Whispering / By The Light Of The Silvery Moon / When You're Smiling
07  Medley: For You / I'll Be Your Sweetheart / If You Were The Only Girl
08  Medley: Ma! He's Making Eyes At Me / Rockabye Your Baby With A Dixie Melody / Ain't We Got Fun