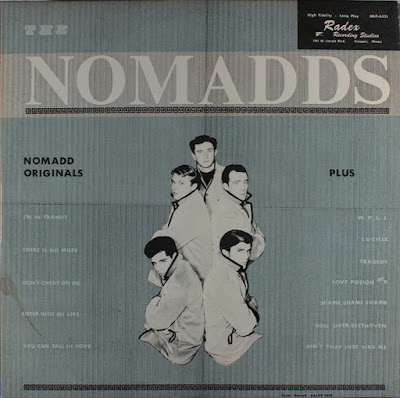 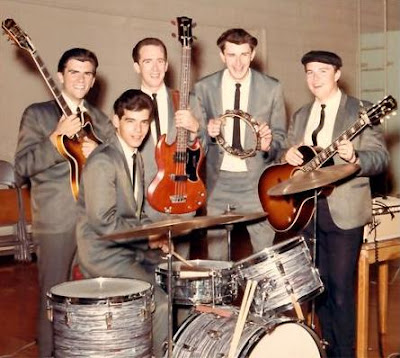 "The Nomadds, from Freeport, Illinois—that’s with two D’s, by the way—were the big deal where I grew up. They worked for years as a club band, originally doing Little Richard and Chuck Berry and Everly Brothers kind of stuff. Then when the Beatles hit in ’64, they suddenly became the hottest band in the area because they could do Little Richard songs and harmonize like the Everly Brothers, and it came out sounding like the Beatles. They also did a lot of original stuff, and they were just the best band I’d ever heard. They kicked butt live—I must have seen them 50 or 100 times live, every weekend. It was two guitars, bass and drums played through two amplifiers—one amp for bass and lead, and one amp for vocals and rhythm guitar—and it was the best live sound I ever heard, just like the records." (Rascalin, front man for OC reggae band Rascalin & the Roots Rockers from "Records That Changed My Life")
"...The LP opens most impressively with one of five Nomadd originals, the catchy, sublime and just plain great "You Can Fall In Love"; a simple melody hook baiting the listener into swallowing a sweet minor chord bridge before getting delightfully gutted by a brief tempo shift that these guys probably were alone in their zip code area to pull off. As far as 1964 beat sounds go, this is masterful. A flawless cover of "Shame Shame Shame" follows, done Cavern-style, which means an understated, subtle approach far from any unpleasant Roger Daltrey "rock" postures. I said I wasn't going to bring in the Beatles, but have to point to the Fabs' superb 1963 BBC recording of "Memphis, Tennessee" as a blueprint for this sound. The Nomadds then deliver another flawless original with "In Transit", an uncanny recreation of the best aspects of early Liverpool-mania, carrying the unabashed teen woes of 50s pop into the guitar band era. The vocals are superb, better than almost anything I've heard on a local LP from the era.
Two "rockers" follow, paying tribute to forefathers Little Richard and Chuck Berry respectively, flawlessly done with lots of little details that suggest a backbone of several months of rehearsal and club dates before the Nomadds worked up the nerve to cut their album. Side 1 closes with another band original, and another moody minor chord winner, the title being "There Is No More" and the band displaying their effortless grasp of tempo shifts and advanced verse-bridge-refrain structures like Brian Epstein might walk in the door any minute. Side 2 opens with the always popular "Just Like Me" which works up a bit of a frenzy and even some wild teen screams, suggesting briefly that the 'Madds (a nickname I just invented) were just another top 40 cover band gone haywire on asthma pills. The throbbing bass line and angular vocal harmonies that make up "Don't Cheat On Me" tells you that they weren't, the message being "garage" but the sound being all beat.
A slow, last-dance take on "Tragedy" reminds you that crooner ballads were still a mandatory ingredient on both sides of the Atlantic at this point, unless your last name happened to be Lennon. Speaking of John Winston I'm convinced he would have nodded in approval of the clear-cut 'Madds take on that old Neal Cassady favorite, "Love Potion #9", a song I wish more 60s bands would have done. The drug theme is expanded further on "W.P.L.J" a teen booze-hound favorite extolling the virtues of White Port and Lemon Juice, in case you weren't around at the time. It's a fine rendition, but like the two preceding covers, that unique Nomadds' touch doesn't fully carry over into the non-originals. Realizing the jeopardy they're in, the band slides back into your cortex with the supremely atmospheric original "Enter Into My Life", with a teen vocal so haunting that Gerry Marsden would have gone back to driving a milk truck if he'd ever heard it. A muffled, slightly reverbed guitar solo captures the timeless essence of the teen experience as skillfully as the organ solo on Phil & the Frantics "I Must Run", and when the guy starts humming along with the guitar towards the end you realize that this is the major league company in which the Nomadds belong, whenever they worked up the cojones to write their own songs. All five originals on this LP are truly great...." (REVIEWS #51 - 60)

Their only album has finally been reissued by Way Back Records on vinyl and cd. The Nomadds was originally released by Radex in 1965. They enjoyed quite a local following in Freeport and were Northwestern Illinois’ most popular teenbeat group bar none. The group’s lineup is: Lee Garner (lead guitar), Tony Cannova (drums), Greg Johnson (rhythm guitar, vocals), Denny Kuhl (bass), and Dean Kuehl “Stick” (vocals, harmonica – the big guy who stands center on the album’s cover).

The Nomadds is closer in spirit to early British Invasion records like Meet The Beatles or Gerry and the Pacemakers from their giddy 1963/1964 prime. For this reason interest may be limited: there are no fuzz guitars, walls of feedback, psychedelic freakouts, or shouting punk vocals; this album was recorded in 1964! That being said, the song arrangements are articulate and take interesting detours that most teenbeat/garage groups couldn’t handle. The Nomadds cut their teeth playing the bars and teen clubs of Illinois which would explain the accomplished nature of their performances.

You’re buying the album for the five great originals but some of the covers are pretty solid too. Standout covers to these ears are a rocking version of “Roll Over Beethoven,” a rollicking “W.P.L.J.,” Jimmy Reed’s “Shame Shame Shame,” and the ultimate teenage heartbreak of “Tragedy.” Excellent originals like “There Is No More” and “You Can Fall In Love” mix minor chords, folk-like guitars and rocking rhythms while other good tracks hit more of a tender, love song vibe. My favorite tune is “Don’t Cheat On Me”, a great performance with an interesting guitar intro and a marvelous vocal arrangement – this is teenbeat at it’s finest, really.

So while this LP may not be a definitive classic, it’s still very good and recommended to those who appreciate the British Invasion or very early American garage/teenbeat sounds. 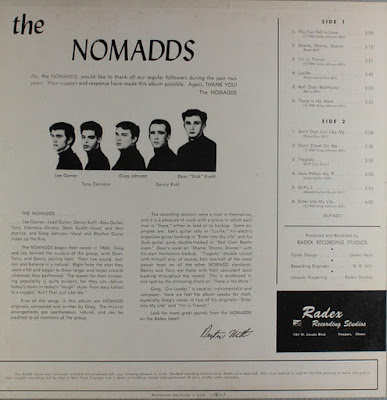