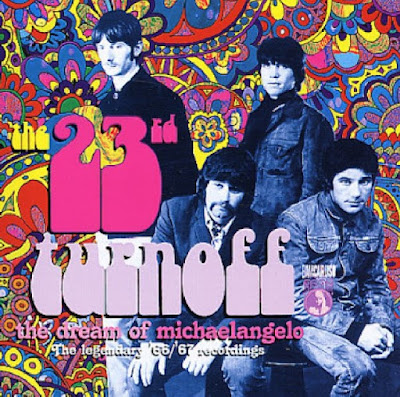 The 23rd Turnoff's name was an in-joke, referring to the exit off the M-6 that led to Liverpool, whence they came. Their history was a bit like that of the Tremeloes or, closer to home, the Beatles, in that their musical lineage went back to the end of the 1950s. With guitarist/composer Jimmy Campbell as their leader, they went through a long (and musically credible) stint as the Kirkbys, before evolving into the 23rd Turnoff, embracing flower-power and psychedelia in the process. Their magnum opus was "Michaelangelo," a gorgeous if somewhat downbeat single that should've fit right in with pieces like "Nights in White Satin," among other melancholic hits. It didn't make the charts, and eventually the group split up and Campbell teamed up with Billy Kinsley to form Rockin' Horse
Although this 21-track compilation is credited to the 23rd Turnoff, in fact it's a combination of recordings by the Kirkbys, the mid-'60s Merseybeat group led by Jimmy Campbell, and the 23rd Turnoff, the more psychedelic band they evolved into in 1967. It reveals Campbell as perhaps the most unheralded talent to come out of the Liverpool '60s rock scene, as he was a songwriter capable of both spinning out engaging Merseybeat and — unlike almost every other artist from the city, with the notable exception of the Beatles — making the transition to quality, dreamy psychedelia. Both sides of all three of the Kirkbys' 1965-1966 singles are here, as well as a bunch of unreleased recordings and outtakes by the group, all written or co-written by Campbell. While there's no obvious hit among them, they're catchy, Beatles-influenced tracks, showing some folk-rock and Revolver influence on the later efforts. The 23rd Turnoff material (much of it previously unissued) is more adventurous, though still retaining Campbell's knack for solid vocal harmony-driven melodies, with "Flowers Are Flowering" sounding very much like Roger McGuinn singing something off Revolver. "Michael Angelo," the A-side of the sole 23rd Turnoff single, is certainly the highlight, and indeed a highlight of 1967 British psychedelia as a whole in its hazy bittersweet swirl; you also get not one, but two unreleased studio versions of the same tune as well. It seems as if Campbell needed just a bit more encouragement, and his groups just a little more studio time, to develop into a notable British psychedelic group that could combine solid pop melodies, sophisticated lyrics and arrangements, and touches of English whimsy. Unfortunately they didn't get that chance, but what's here is satisfying on its own terms, bolstered by thorough liner notes explaining the complicated Campbell/Kirkbys/23rd Turnoff saga 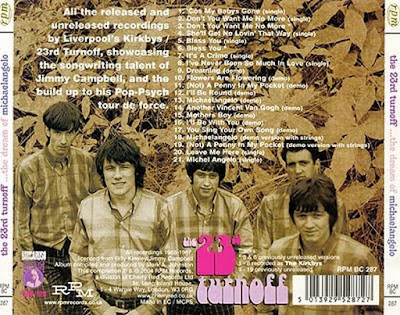