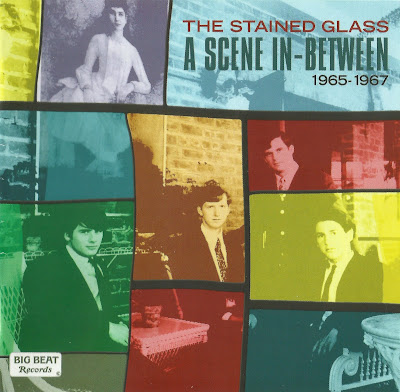 Pop-rock trio Stained Glass formed in 1966, a product of the same San Jose, California music scene that also produced the legendary Syndicate of Sound, the E Types, and the Count Five. Bassist/songwriter Jim McPherson, guitarist Bob Rominger, and drummer Dennis Carrasco quickly evolved from Beatles covers to writing original material, even though upon signing to RCA, their debut single was headlined by the Fab Four cover "If I Needed Someone." The self-penned gem "My Buddy Sin" closed out the year, and in the spring of 1967 Stained Glass scored a major local hit with "We Got a Long Way to Go." "A Scene in Between" soon followed, but the group again proved unable to dent the national charts, and RCA terminated their contract. Stained Glass signed to Capitol, issuing "Lady in Lace/Soap and Turkey" in mid-1968. Early the following year, they issued their first full-length effort, Crazy Horse Roads. Rominger soon exited, and with the addition of new guitarist Tom Bryant they released Aurora, but when both albums were ignored by record buyers, the trio dissolved in November 1969. McPherson later resurfaced in Copperhead. 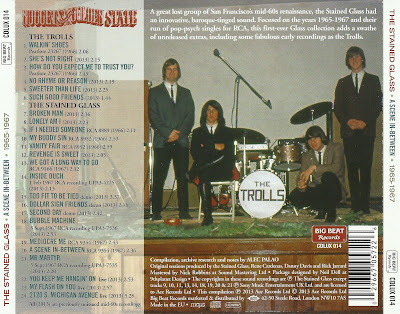 The Stained Glass were a group from San Jose, California who started out as a garage band with folk-rock leanings under the name the Trolls; they began exploring more adventurous and mature stylings as they evolved into the Stained Glass, and toyed with dandified psychedelia before they detoured into country-rock. With a story like that, the Stained Glass sound remarkably typical of a California band whose career stretched from the mid-'60s into the early '70s, but they were notably better than most of their peers. Primary songwriter and bassist Jim McPherson devised clever and catchy melodies that were more Baroque than most of his peers, along with smart, witty lyrics, and he and his bandmates -- lead guitarist Bob Rominger, rhythm guitarist Roger Hedge, and drummer Dennis Carrasco -- harmonized beautifully regardless of the direction that they followed at the moment. While a latter-day edition of the Stained Glass would cut a pair of albums for Capitol in 1969 and 1970, A Scene In-Between documents the group's output from 1965 to 1967, opening with six tracks from the Trolls (including the lone single the band self-released), 15 tracks from their tenure with RCA Victor (including six of the eight tunes the label released as singles, along with demos and unreleased tracks), and three numbers from a 1967 live gig that reveals they were a very powerful live act, with Rominger and Hedge showing their stuff as an excellent guitar combination. While there were plenty of bands from the Golden State that released the stray brilliant single in the mid-'60s, what set the Trolls and the Stained Glass apart is their consistent strength as well as their eclecticism; of the 24 tracks on A Scene In-Between, pretty much everything satisfies, regardless of where it lies in the combo's creative arc, and it's a shame RCA Victor didn't release a full album on the group, because it's clear they had the songs and the smarts to make things happen in the studio. This is a more enjoyable listen than the solid but less compelling LPs Capitol would release later on.