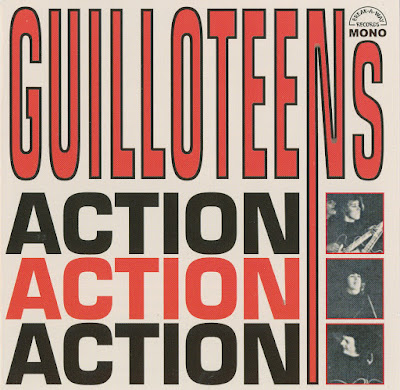 The Guilloteens were an American garage rock band formed in Memphis, Tennessee in 1964. Much of the band's musical stance was distinguished for incorporating their homegrown Memphis influences with a hard-edged sound. Among the group's singles, the Guilloteens are most-known for their regional hit "I Don't Believe" and "Hey You". Although national success eluded the group, they are now considered one of the more accomplished garage rock acts to emerge from the era.

Laddie Hutcherson (lead vocals, lead guitar), an ex-member of local Memphis group the LeSabres, formed the Guilloteens with Joe Davis (drums) and Louis Paul (bass guitar, backing vocals) in 1964. The trio originally encountered one another as members of the touring version of the studio R&B session band the Mar-Keys, a group who produced the number three Billboard Hot 100 hit "Last Night". When the horn section and backup singers failed to appear for a gig, the three performed on their own, with the upbeat reception leading to them forming the Guilloteens. Reflecting on the formation of the band, Hutcherson recalls "We let our hair grow long and we started wearing English-looking clothes. We chose a name that sounded European since we were trying to cash-in on the Beatles".The Guiloteens subsequently earned a role as a house band for a popular Memphis teen dance club the Roaring Sixties, where they developed a sizable following among the area's pop audience.

Noticing the band's growing popularity, Jerry Williams, who managed fellow garage rock act Paul Revere and the Raiders, assumed the role as the Guilloteens' manager, and relocated the group to Los Angeles, presenting them on the television program Shindig!. In addition to Shindig!, the Guilloteens also made multiple performances on American Bandstand, Hullabaloo and Where the Action Is. The band's appearances on the shows made a fan out of Elvis Presley, convincing the singer to negotiate a spot for the Guilloteens at the Red Velvet nightclub in early 1965. While opening for the Byrds and the Turtles, the band also shared the stage with the Righteous Brothers, who helped the Guilloteens rehearse and polish some of their first compositions, including the Paul-original "I Don't Believe". 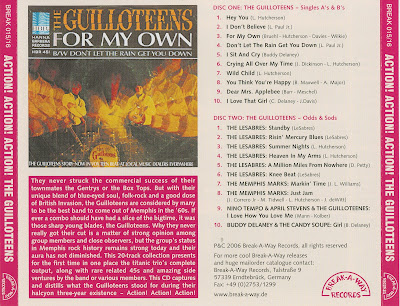 They never struck the commercial success of their townmates the Gentrys or the Box Tops. But with their unique blend of blue-eyed soul, folk-rock and a good dose of British Invasion, the Guilloteens are considered by many to be the best band to come out of Memphis in the '60s. If ever a combo should have had a slice of the bigtime, it was those sharp young blades, the Guilloteens. Why they never really got their cut is a matter of strong opinion among group members and close observers, but the group's status in Memphis rock history remains strong today and their aura has not diminished. This 20-track collection presents for the first time in one place the titanic trio's complete output, along with rare related 45s and amazing side ventures by the band or various members. This CD captures and distills what the Guilloteens stood for during their halcyon three-year existence – Action! Action! Action!.