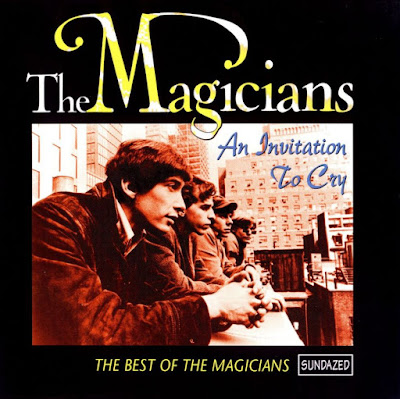 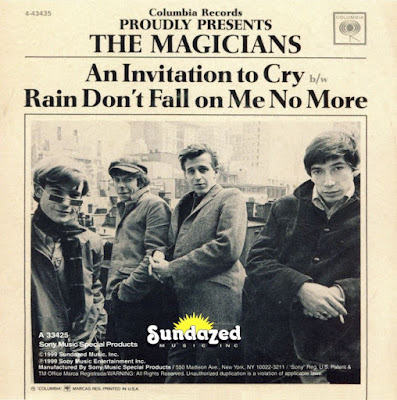 lthough they're rather mistakenly thought of a '60s garage band due to the inclusion of their fine 1965 single "An Invitation to Cry," on the original Nuggets compilation, the Magicians were an all-around pop/rock group that also drew from folk-rock, blues, and soul. They had a pretty intricate history for a short-lived act that only managed to put out four Columbia singles between 1965 and 1967. Drummer and songwriter Alan Gordon was playing in an interracial band, Tex & the Chex, in Greenwich Village when they were discovered by record producers Bob Wyld and Art Polhemus. Gordon had written "An Invitation to Cry" with Jimmy Woods (who was not in the band), which Gordon recorded with Tex & the Chex, which then included guitarist Mike Appel (who managed Bruce Springsteen for a while during the Boss' early career). The producers wanted a better singer and enlisted Garry Bonner to do the vocals. The resulting recording, "An Invitation to Cry," was superb moody pop/rock with a touch of blue-eyed soul, enhanced by an imaginative production highlighting ominous distorted guitar riffs, graceful tempo shifts, accomplished vocal harmonies, and Bonner's anguished lead vocal.

The group, renamed the Magicians, got a deal with Columbia, but reorganized their personnel, with Appel and bassist Everett Jacobs leaving, and Village folkies, Allan "Jake" Jacobs and John Townley coming in as replacements. The Magicians gained a following in New York by taking over as house band from the Lovin' Spoonful at the Night Owl club. In fact, Felix Pappalardi, future Cream producer and Mountain man, wanted to join them as bassist. They never did come up with another song on the order of "An Invitation to Cry," though, on their two 1966 Columbia singles, which showed an eclectic group conversant with both folk-rock (covering two songs by David Blue) and sophisticated pop/rock. They managed to get a segment on the local CBS television program Eye on New York -- unusually heavy exposure for a group without a hit or album -- but the follow-up singles stiffed. They made some unissued recordings in 1966, but the band never did put out an LP, and around mid-1966, Townley and Jacobs both left the band.

One subsequent flop single did appear on Columbia in early 1967, with some other musicians helping Bonner, Gordon, and Townley (who played guitar on the A-side, although he was no longer officially in the group). Bonner and Gordon were at this time becoming successful pop/rock songwriters for other artists, particularly the Turtles, for whom they composed "Happy Together," "She'd Rather Be with Me," "You Know What I Mean," and "She's My Girl." A Magicians CD, containing the four singles and some unissued demos and outtakes from the '60s, appeared in 1999. 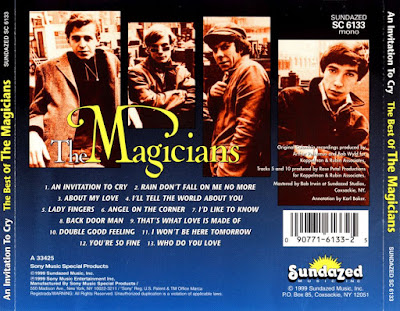