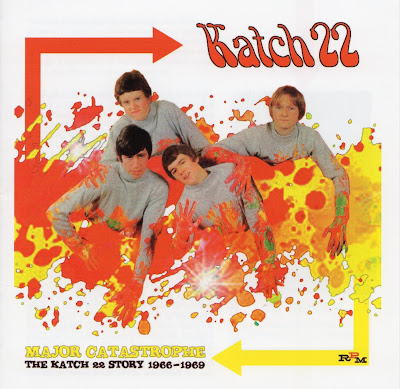 UK group active from 1966 to 1969. The group dabbled in freakbeat, mod and psych pop. They began life as The Midnite Blues and were spotted at the 100 Club in London's Oxford Street by Tokenam Aw. He became their manager and changed the groups name to Katch 22. They released a handful of singles on Fontana and one LP on the UK budget label Saga Eros. They are probably most famous for their first release, a sought after freakbeat number 'Major Catastrophe'. 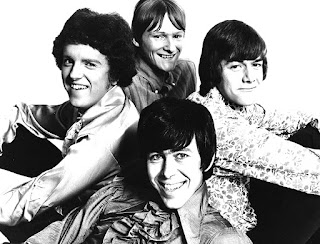 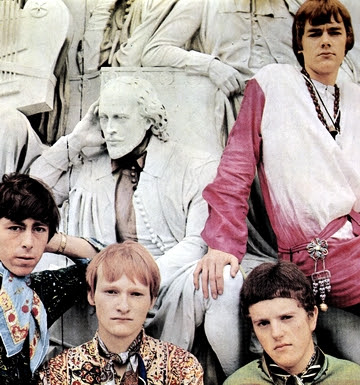 Katch 22 formed in Hackbridge, a suburb in the London Borough of Sutton, Greater London in 1964. Mike Eastman (guitar), Paul Bonner (drummer), lead guitarist Martin Wayne (born Martyn Godbold) and Robert Godbold (bass guitar) were in a beat group that underwent a succession of changes of name until they settled on Katch 22. In June 1966 the group were playing at the 100 Club in Oxford Street when they met Tokenam Aw, a member of the Aw family who controlled the Tiger Balm deep heat rub fortune. Aw approached the band, told them he liked what he had heard and wanted to manage the band. Aw said that he was working with the Fontana label and could get the group a recording deal.

By the end of the summer of 1966, Aw was managing the group and took them into the Olympic studios on September 20 to record "Major Catastrophe" b/w "Hold Me". Both songs were composed by Aw but since he could not play any musical instrument, Aw would hum what he wanted (a la Joe Meek) and a group member would pick out guitar chords that Aw would accept to build the song. As with many bands during this time, session musicians, including Ronnie Verrell on drums, were used and only the group's vocals were provided for the disc. In addition to a record deal, Aw procured live work for the group, supporting acts such as the Small Faces and the Alan Price Set. In December 1966 they also filmed a Colgate toothpaste advertisement for television.

In June 1967, bass player Robert Godbold left the group and was replaced by Paul Clifton. The next 45 release, "Makin' My Mind Up" b/w "While We're Friends" did not chart, as was the case with the first single. On December 12th, Katch 22 recorded their first Radio One session for the "Dave Symonds Show" at BBC Studio 4 in Maida Vale, London. Within the week, they were in France performing as part of the Psychedelic "La Fenetre Rose" package show with Cat Stevens, Keith West & Tomorrow, The Spencer Davis Group, The Soft Machine and Zoot Money & Dantalian's Chariot.

Following the next single, "The World's Getting Smaller" b/w "Don't Bother", Katch 22 wanted to record an album for Fontana. However, Fontana were not willing to allow an album since Katch 22 hadn't had any hits. Since the group were on a record to record deal with Fontana, they were able to record an LP with Saga at Regent Sound produced by Tokenam Aw / Richard Hartley, with sleeve notes written by John Edward [/artist] (Radio London D.J.) The album, "It's Soft Rock & All Sorts, It's KATCH 22", sold approximately 75,000 copies, but since it was only sold in W.H.Smith's newspaper stands and at Woolworth's etc, the LP wasn't listed on the album chart. The album gave the boys their first chance at writing their own material, and songs by Paul Bonner, Martin Wayne, Mike Eastman were all featured. The group's release became Album of the Week on the "Dave Symonds Show", BBC Radio One.

With success of the album, Aw was able to secure the group work in the film "Baby Love", starring Diana Dors and Dick Emery. Aw composed "Baby Love" and "Out of My Life" that were perfomed by the group in the movie but the two tracks were held back for release since the movie was not to open until the following year. Instead, "Pumpkin Mini" b/w "100,000 Years" was issued and then the group began a one month residency at the Star-Club in Hamburg.

Returning to England, Katch 22 continued their schedule of one nighters. On March 4 1969, "Baby Love" premiered at the Odeon Theatre in London and Fontana issued the accompanying single. Due to the lack of success of yet another 45, Paul Clifton and Martin Wayne quit the group. Clifton was replaced by John Curtis (formerly Cherry Smash) and Keith Wilford filled in as replacement for lead guitarist Martin Wayne. The group recorded many sessions for radio but John Curtis left nine months after joining and Bryan Jackson was brought in.

In order to prevent contractual difficulties with Fontana, a single was released on UK CBS under the name Westland Steamboat, "Born Under a Bad Sign" b/w "Missouri Train".

In December 1970 Bryan Jackson left the group and manager Tokenam Aw returned to Hawaii to work in the family business. John Edward became new manager and agent and supplied abundant work with touring, gigging the university circuit and providing shows at RAF and Naval Bases. With the departure of Bryan Jackson, Mike Eastman moved to bass guitar, and Katch 22 continued as a trio. On February 5 1972, Katch 22 performed its last show. Members who had been Katch 22 changed names and recorded as Paintbox. 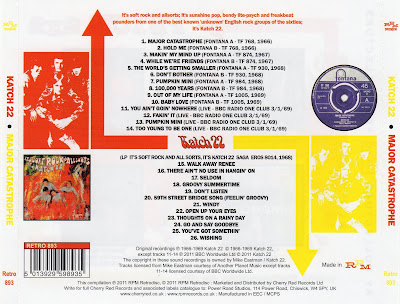 Unearthing another hidden gem from the Saga catalogue. Katch 22 were a bunch of young boys that produced the UK answer to the US Soft-Rock scene. It is ironic that a UK band can be so influenced by those US bands that were most highly under the influence of British popsike! Think of Harper's Bizarre, The Association, The Millenium or Eternity's Children even higher on tea! A surprisingly good production for a Saga pop/psych LP, the album is built up of excellent cover versions of some greats of the genre, paying tribute to the likes of The Left Banke ('Walk Away Rene'), Simon & Garfunkel / Harper's Bizarre ('Feelin' Groovy') or even Buffalo Springfield ('Go And Say Goodbye') and also of some good originals in the same vein. It is certainly an underated period piece that deserves a wider recognition, a great sounding album of orchestrated (and non orchestrated) pop sounds..