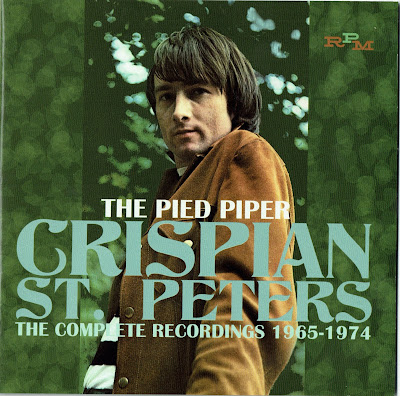 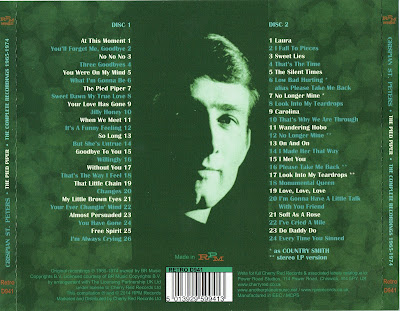 Crispian St. Peters (born Robin Peter Smith, 5 April 1939 – 8 June 2010) was an English pop singer-songwriter, best known for his work in the 1960s, particularly songs written by duo hits, The Changin' Times' including "The Pied Piper" and Ian & Sylvia's "You Were on My Mind".

St. Peters was born in Swanley, Kent and attended Swanley Secondary Modern School. He learned guitar and left school in 1954 to become an assistant cinema projectionist. As a young man, he performed in several relatively unknown bands in England. In 1956, he gave his first live performance, as a member of The Hard Travellers. Through the late 1950s and early 1960s, as well as undertaking National Service, he was a member of The Country Gentlemen, Beat Formula Three, and Peter & The Wolves.
While a member of Beat Formula Three in 1963, he was heard by David Nicholson, an EMI publicist who became his manager. Nicholson suggested he use a stage name, initially "Crispin Blacke" and subsequently Crispian St. Peters, and deducted five years from the then 24 year olds age stating for publicity purposes, and promoting his client as a 19 year old[3] In 1964, as a member of Peter & The Wolves, St. Peters made his first commercial recording. He was persuaded to turn solo by Nicholson, and was signed to Decca Records in 1965. His first two singles on this record label, "No No No" and "At This Moment", proved unsuccessful on the charts. He made two television UK appearances in February of that year, featuring in the shows Scene at 6.30 and Ready Steady Go!

In 1966, St. Peters' career finally yielded a Top 10 hit in the UK Singles Chart, with "You Were on My Mind," a song written and first recorded in 1964 by the Canadian folk duo, Ian & Sylvia, and a hit in the United States for We Five in 1965. St. Peters' single eventually hit No. 2 in the UK and was then released in the US on the Philadelphia-based Jamie Records label. It did not chart in the US until after his fourth release, "The Pied Piper," became known as his signature song and a Top 10 hit in the United States and the UK.

Although his next single, a version of Phil Ochs' song "Changes," also reached the charts in both the UK and US, it was much less successful. In 1967, St. Peters released his first LP, Follow Me..., which included several of his own songs, as well as the single "Free Spirit". One of them, "I'll Give You Love," was recorded by Marty Kristian in a version produced by St. Peters, and became a big hit in Australia. St. Peters' album was followed by his first EP, Almost Persuaded, yet by 1970, he was dropped by Decca. "You Were on My Mind" was featured in the 1996 German film Jenseits Der Stille (Beyond Silence).
Later in 1970, he was signed to Square Records. Under this new record deal, St. Peters released a second LP, Simply, that year, predominantly of country and western songs. Later still they released his first cassette, The Gospel Tape, in 1986, and a second cassette, New Tracks on Old Lines in 1990. His third cassette, Night Sessions, Vol. 1 was released in 1993.

Several CDs also came from this record deal, including Follow Me in 1991, The Anthology in 1996, Night Sessions, Vol. 1 in 1998, The Gospel Tape in 1999, and, finally, Songs From The Attic in 2000. He also performed on various Sixties nostalgia tours, and continued to write and arrange for others until his later ill health.

Personal life
From 1969 to 1974, St. Peters was married to Collette. The marriage produced a daughter, Samantha, and a son, Lee.

On 1 January 1995, at the age of 55, he suffered a stroke. His music career was severely weakened by this, and in 2001 he announced his retirement from the music industry. He was hospitalised several times with pneumonia after 2003.

If You Need The Flac Version Of This Compilation, Head over to

Pop On The Run

Great Blog And TY To The Original Sharer