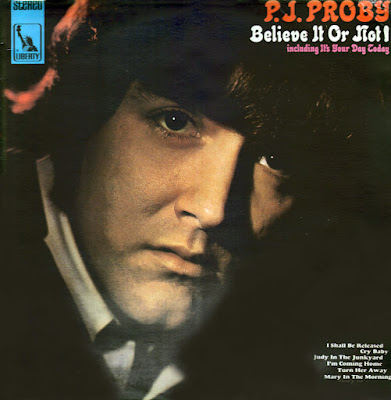 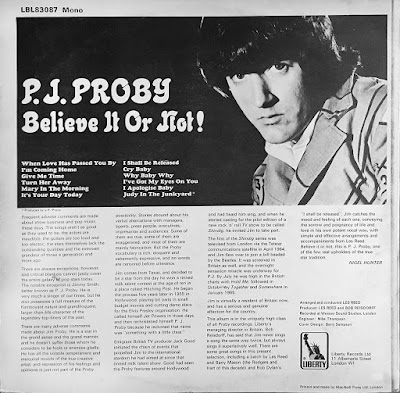 P.J. Proby (born James Marcus Smith, November 6, 1938) is an American singer, songwriter, and actor. He has also portrayed Elvis Presley and Roy Orbison in musical theater productions. The stage name P.J. Proby was suggested by a friend, Sharon Sheeley, who had a boyfriend of that name at high school.

Proby recorded the singles "Hold Me", "Somewhere", and "Maria". In 2008, he turned 70 and EMI released the Best of the EMI Years 1961–1972. He still writes and records on his own independent record label, Select Records, and performs in the UK in Sixties concerts.

Proby was born in Houston, Texas, United States, and educated at San Marcos Military Academy, Culver Naval Academy, and Western Military Academy. After graduation he moved to California to become a film actor and recording artist. Given the stage name Jett Powers by Hollywood agents Gabey, Lutz, Heller, and Loeb, he took acting and singing lessons and played small roles in films. Two singles, "Go, Girl, Go" and "Loud Perfume" appeared on two small independent record labels. Proby was brought by Sharon Sheeley to audition at Liberty Records in 1961 and he recorded a number of unsuccessful singles. In 1962 he began writing songs and recording demos for artists such as Elvis Presley, Bobby Vee, and Johnny Burnette, who had his final UK chart success with Proby's "Clown Shoes" (credited to his real name James Marcus Smith).

Proby travelled to London after being introduced to Jack Good by Sheeley and Jackie DeShannon. He appeared on The Beatles' television special in 1964. Under Good, Proby had UK top 20 hits in 1964 and 1965 including "Hold Me" (UK Number 3), "Together" (UK Number 8), "Somewhere" (UK Number 6), and "Maria" (UK Number 8); the latter two songs were both lifted from the musical West Side Story. He also recorded the Lennon–McCartney composition "That Means a Lot", a song The Beatles attempted to record before giving it away.

Proby's UK career lost momentum after controversial live concert appearances including two trouser-splitting incidents at shows in Croydon and Luton in January 1965 that scandalized the British press and public and led to bans on Proby appearances by the ABC theatre chain, its TV namesake and BBC TV. Minor hits in 1966 were followed by flops, and in March 1968 "It's Your Day Today" gave Proby his last UK chart entry for nearly 30 years.

In 1967 Proby scored his only Billboard Hot 100 Top 30 hit with "Niki Hoeky". In September 1968, he recorded Three Week Hero, released in 1969. A collection of country-style ballads mixed with blues, it used The New Yardbirds, later to become Led Zeppelin, as backing band. The album was produced by Steve Rowland.

In 1971, he appeared as Cassio in a rock musical of Shakespeare's Othello, Catch My Soul. He performed in cabaret and nightclubs, singing 1960s ballads and rhythm and blues.

In 1977, he appeared as a contestant on the UK television talent show Opportunity Knocks. He wore an eye-mask and was billed as "The Masked Singer".

Signing with Good again in 1977, he portrayed Elvis Presley in Elvis – The Musical, winning a Best Musical of the Year award.

In 1978, Proby recorded Focus con Proby with the Dutch rock group Focus. He then returned to singing in clubs, before a change of direction.

In 1985, Proby recorded Gloria Jones's "Tainted Love" for Savoy Records, followed by covers of "Love Will Tear Us Apart", "Anarchy in the UK", Prince song "Sign o' the Times", "In the Air Tonight", and "Garbageman".

In 1987, his Savoy Records single "M97002 Hardcore" credited Madonna as "Second Vocal (Special Guest)", although this was untrue.

In the early 1990s Proby released an EP, "Stage of Fools", and an album, Thanks. They were issued by J’ace Records, distributed by BMG. Granada TV featured Proby in a documentary.

A heart attack on holiday in Florida in 1992 curtailed his activities until the following year. Then he reappeared on stage as himself in the musical Good Rockin' Tonight, followed by playing Roy Orbison in Only The Lonely. A year later Proby returned to a new production of Elvis – The Musical, and made the album Legend. It had songwriting and production from Marc Almond, and Neal X from Sigue Sigue Sputnik. A single, "Yesterday Has Gone", a duet with Almond, reached 58 on the UK Singles Chart at the end of 1996.

In 1997, Proby toured with The Who in the United States and Europe, performing as 'The Godfather' in the road production of Quadrophenia.After Quadrophenia, Proby played the UK, Sweden, Denmark, and Germany.

In 2002, Van Morrison recorded a song for his album Down the Road entitled "Whatever Happened to P. J. Proby?".

In August 2004, Proby toured in Australia. From February until May 2006, He appeared with the 'Solid Silver Sixties Show 2006' – and went through six road managers/drivers – throughout much of the UK, ending at the London Palladium.

In November 2008, Proby celebrated his 70th birthday. EMI released a 25-track retrospective, Best of the EMI Years 1961-1972. This featured his singles, eight rarities that debuted on the CD format, and two unreleased recordings (Les Reed and Barry Mason's "Delilah"; and Jim Ford's "I'm Ahead If I Can Quit While I'm Behind"). Reed wrote "Delilah" for Proby's 1968 album Believe It Or Not, but it was omitted and became a hit for Tom Jones. Proby wrote and recorded a Christmas single entitled "The Bells of Christmas Day" with guitarist and producer, Andy Crump.

In 2010, Proby toured in 'Sixties Gold' another revival series of shows.

In 2011, Proby was charged with nine charges of benefit fraud. He was cleared of all charges at Worcester Crown Court in 2012. To celebrate, Proby recorded "I'm PJ." and "We The Jury" (which Proby wrote).

In 2015, he performed in a duet with Van Morrison on the album, Duets: Re-working the Catalogue, singing "Whatever Happened to P.J. Proby".