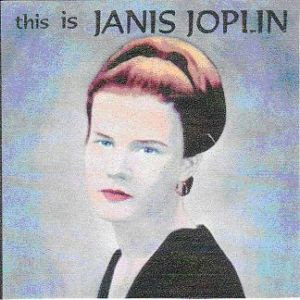 
Recorded originally in 1965, the seven tracks that appear here are all previously unreleased, including Joplin's original version of her song "Turtle Blues" and an alternate version of "Cod'ine" by Buffy Sainte-Marie. Originally just Joplin and her guitar, a full band has been added to these tracks. The original takes of these songs have been released on the 9 disc compilation Blow All My Blues Away , with the exception of "Cod'ine", which is also the enhanced version featured on this collection.

Joplin was the eldest of her siblings Michael and Laura, and attended Thomas Jefferson High School, where she began painting and listening to blues artists Bessie Smith, Leadbelly, Big Mama Thornton and Odetta with the other rebellious kids in her neighborhood. She graduated high school in 1960, and in 1962, she quit university in the middle of her studies. The university then ran the headline, "She Dares To Be Different" in the student newspaper.

She went to San Francisco in 1963, first living in North Beach and later, Haight-Ashbury, where she begun the drug and alcohol habits that would tragically end her life. During this period, she recorded a session with Jorma Kaukonen that later appeared as the bootleg "The Typewriter Tape". Noticeably suffering from her addictions, she returned to Port Arthur in May 1965 and 'straightened up' for a year, enrolling as a sociology major at Lamar University.

In 1966, at the invitation of Chet Helms whom she'd known as a teenager, she returned to California and was recruited as the singer for Big Brother & The Holding Company in June, appearing at the [c=Avalon Ballroom] in San Francisco during her first public performance with them. In August 1966, the group signed with Mainstream Records and recorded an album. However, it was not released until a year later and in the meantime, with very little reward, they moved with the Grateful Dead to a house in Lagunitas, California. It was there that Joplin relapsed into hard drug use.

Joplin and the band signed with Albert Grossman in November 1967 and released Big Brother & The Holding Company - Cheap Thrills in 1968. This release was the culmination of a year in which Joplin had wowed audiences at the Monterey Pop Festival, the Anderson Theater in New York, the Wake For Martin Luther King Jr concert with Jimi Hendrix in New York and on TV's prime-time Dick Cavett Show. Joplin then left the band after a Family Dog benefit gig in December 1968 and formed a back-up group, the Kozmic Blues Band, releasing an album in September 1969. The group disbanded three months later, with Joplin again suffering from her addictions.

After taking time out in Brazil with friend Linda Gravenites, who was her costume designer and praised by Joplin in the May 1968 issue of Vogue, Joplin returned to America and formed the Full Tilt Boogie Band, which began touring in May 1970. She also appeared in reunion concerts with Big Brother & The Holding Company at this time. She then began recording a new album in September 1970 with producer Paul A. Rothchild.

By Saturday, October 3rd Joplin had already laid down a number of takes at [c=Sunset Sound Studios] in LA, including "Mercedes Benz". On the following day she failed to appear and John Cooke, the road manager of Full Tilt Boogie Band, drove to the Landmark Motor Hotel where Joplin was staying. There he found her dead on the floor of her room, the result of a seizure caused by a heroin overdose.

Joplin was cremated and her ashes scattered from a plane into the Pacific Ocean. Her unfinished recordings were assembled and the result was the posthumously released Janis Joplin - Pearl in 1971. It became the biggest selling album of her career.

Inducted into Rock And Roll Hall of Fame in 1995 (Performer).