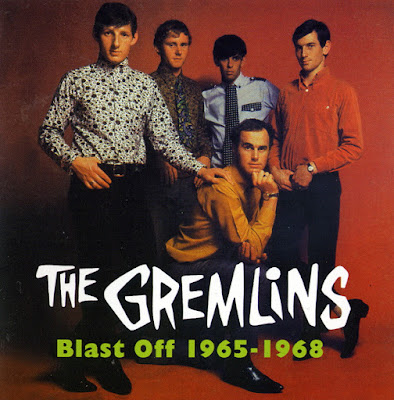 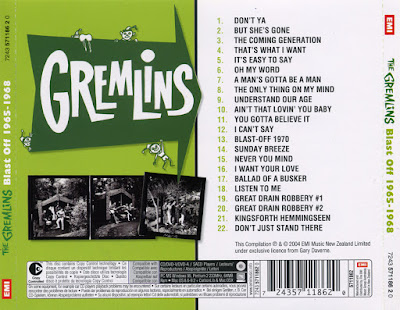 Former Embers stalwart Glyn Tucker was just in his 20s but already an industry veteran when he formed The Adventurers in early 1965 with Paddy McAneney (guitar), Peter Davies (guitar), Roger Wiles (drums) and Ben Grubb (bass).
During April 1965 they changed their name to The Gremlins and in mid-year the group recorded their first single ‘But She’s Gone’/‘Don’t Ya’ on the Allied International label.

Shortly after their debut single, Glyn and Paddy were called up for National Service, which put the group into mothballs as they embarked on their 12-week compulsory military training.

On discharge in December 1965, a considerably fitter Glyn and Paddy re-grouped and they approached Viscount Records owner Gary Daverne, who had been in The Embers with Glyn. Daverne was enthusiastic and the first Viscount session for the group took place in June 1966 at Eldred Stebbing’s Saratoga Ave studio. It was decided that ‘The Coming Generation’ would be the next single. At the last minute, Paddy had to borrow a 12-string guitar from the music retailer Lewis Eady. The borrowed instrument gave the song a folk rock feel that suited the mild protest element of the song.

‘The Coming Generation’ burst on to the national charts the following month and instantly became a big hit for the group, eventually peaking at No.2 on the New Zealand Hit Parade on September 22, 1966. The Beatles’ ‘Yellow Submarine’ prevented it from reaching the top.

As a follow-up single the group recorded a Glyn Tucker original, ‘Understand Our Age’. It was released in November 1966 and bubbled under the National Top 20 chart.

Early in the New Year Glyn's long-time friend and collaborator Paddy McAneney decided to leave the group. Instead of finding a new lead guitarist, the band had a more ambitious plan in mind. Ben Grubb had recently bought a Jansen Transonic organ, which paved the way for Ces Good to join the Gremlins on bass with Peter Davies handling lead guitar duties and Glyn taking care of the 12-string guitar.

This new line-up can be heard on the next single ‘You Gotta Believe It’/‘I Can’t Say’ which peaked at No.18 on the NZ Singles Chart during April 1967.

Gary Daverne managed to secure a UK release for ‘The Coming Generation’ on the Mercury label on May 20, 1967 where Record Mirror favourably reviewed it as “A bit Monkee-ish in conception, though it's certainly spirited”.

They weren’t to know that the track was recorded a month before The Monkees’ debut single.

During June 1967 the group recorded their fifth single ‘Blast-Off 1970’. The groovy, space-age keyboard sounds on the record were stumbled upon by accident in the studio. Peter had his guitar strapped on while in close proximity to Ben’s organ, which meant the pickup on Peter’s guitar picked up sound from the organ.

When released the following month, ‘Blast Off 1970 ’ made the finals of the 1967 Loxene Gold Disc Award.

Mercury Records in the UK released ‘You Gotta Believe It’ in the UK on October 22, 1967 with Record Mirror reviewing it as a “tough edged sort of romantic ‘belter’ which goes along nicely in a sharp-cut style”.

Around the same time the group cut their next single ‘Never You Mind’/‘I Want Your Love’, Peter Davies left the band and was replaced by Daron Curtiss from the Gisborne group ‘The Crying Shame’. The Gremlins had observed Daron during one of their tours and sent him a letter asking if he would like to join the group. He jumped at the opportunity.

Overflowing with creative input and with new blood, a rejuvenated Gremlins released their next single ‘Ballad Of A Busker’/‘Listen To Me’ where the disc featured the two songs on the A-side with a double-grooved spoof on side 2 called ‘The Great Drain Robbery’. The two grooves meant that depending on where the needle was dropped, either track would play.

The Gremlins ambitiously wrote songs and a script for a television pop-opera based on a fictional town called Kingsforth Heemingseen. This was to be a new beginning for the group but instead turned into a death knell when AKTV2 politely turned the project down. The theme song was recorded and released as a single in November 1968, to little fanfare.

The Gremlins broke up soon after in January 1969. Glyn Tucker carried on playing in several bands before starting a long and distinguished career on the production side of the music industry.