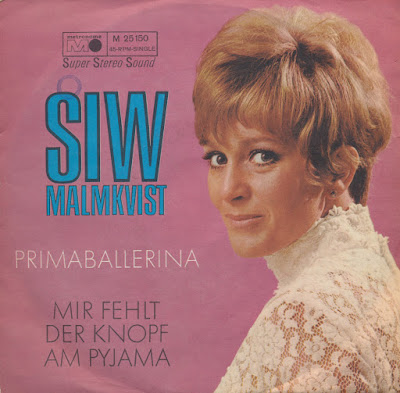 Continuing The International Singles Collection is..........

"Primaballerina" (Italian "First Ballerina" - the second highest female ballet dancer) is a 1969 song performed by Swedish singer Siw Malmkvist and written by Hans Blum. It was the German entry in the Eurovision Song Contest 1969. Malmkvist was the second of three female Scandinavian schlager artists to represent Germany in the Contest in the late 1960s and early 1970s, the first being Norwegian Wenche Myhre in 1968 with "Ein Hoch der Liebe" and the third Danish Gitte Hænning with "Junger Tag in 1973. Malmkvist had previously also represented her native Sweden in the 1960 Contest with "Alla andra får varann".

Siw Malmkvist was inducted into the Swedish Music Hall of Fame in 2016 .

Siw Malmkvist grew up in a children's kingdom house in Landskrona. She is the daughter of the phosphate worker Albert Malmkvist (1901–1979) and Sigrid Lind (1899–1988) as well as the older sister of the singer Lil Malmkvist and aunt of Morgan Alling . His career began in his teens when Siw sang with various orchestras at home in Skåne . 1955she competed in a singing competition that became crucial to her future career. She won the semi-finals at home in Skåne and had to go to Stockholm's concert hall where the grand finale took place. She also won there, got a bell in prize and also got to record her first gramophone record " Tweedle Dee ".

The breakthrough had to wait until 1959 when she became the hostess of Lennart Hyland's TV entertainment Big Arm . The same year she won the Melodifestivalen with the song " Augustin ", but it was already decided in advance that Brita Borg would represent Sweden in the international finals in Cannes . With "Augustin" Siw Malmkvist got his first hit; it went directly into fourth place on the trade magazine Show-Business sales list on March 1, 1959 and was sold in over 60,000 copies. However, she got more chances to come out into the world, in 1960 she got to represent Sweden with " Everybody gets each other " when Eurovision Song Contest 1960was decided in London . She ended up in tenth place with the song that Inger Berggren and Östen Warnerbring had won in the Melodifestivalen 1960 , earlier that year.

In 1959 she was launched in what was then West Germany , where she became very popular. The big breakthrough came in the spring of 1961 with " Danke für die Blumen ", her German-language version of " You Don't Understand Nothing " (" Wedding Cake "), which quickly rushed up the top layer on the charts and reached fourth place as best. The year before, in 1960, she had recorded a single under the pseudonym "Die Jolly Sisters", where she, among other things, sang " Die Liebe ist een seltsames Spiel ". The record sold pretty well, but Connie Francis got the big hit with the melody in both German and English. The song was Francis' American list topper " Everybody""Siw Malmkvist, however, won the battle for record buyers in Sweden, where the tune was renamed" Thin Discs ". It became her biggest success in Sweden." Thin Discs "topped the sales lists for seven weeks and sold just over 97,000 copies. the success was " Don't read the letter I wrote you ", also a list that sold in over 80,000 copies.

From 1963 she lived in Helsinki for a few years , with her husband Lasse Mårtenson and daughter, and recorded some records in Finnish. Siw Malmkvist became the first Swedish artist in the American Billboard list in 1964 . Together with Umberto Marcato she sang " Sole Sole Sole " in Italian and was 5 weeks on the list and reached the best place 58.

Siw Malmkvist had great success in the melody competition Schlager-Festspiele in Baden-Baden . At the 1962 debut, she came second with " Die Wege der Liebe ". In 1964 she won the competition with " Liebeskummer lohnt sich nicht ". It sold in over 1,000,000 copies and was one on the West German sales list for ten weeks. The melody was called " Love Pit " when she sang it in Swedish. In 1968 Siw Malmkvist won a second time, now with the tune " Harlekin ". The following year she won West Germany's selection for the Eurovision Song Contest in 1969 . In the Madrid final she placed in ninth place with "Primaballerina ", a place she also shared with Sweden's contribution" Judy my friend "with Tommy Körberg . Even today, Siw Malmkvist is one of the most popular foreign artists in Germany.
She was a movie star in Denmark when she played the lead role in Förälskad in Copenhagen (1960). Siw Malmkvist quickly proved to be a great talent on the stage, not just as a drummer. She played the lead role in the musical Irma la douce in Turku in 1963, starred in the Kar de Mumma revue at Folkan 1972 and in the Karl Gerhard cavalry Hello to you you old primadonna at Vasan in 1976. In 1980 she made an unforgettable performance by Astrid Lindgren's Pippi Longstockingin a cheerful performance at Folkan in Stockholm. She was widely praised for her role of Luisa, the female lead in the musical Nine at the 1983-84 Oscar Theater , where she played against Ernst-Hugo Järegård in the male lead role as the film director Guido.

In recent years, she has participated in the musical I Hottest team at the Nöjesteatern in Malmö (2000) and in Hans Alfredson's melodram Lille Lilley at the Maximteatern (2002). In 2008, she made Ms. Schneider against Sven Walter's Mr. Schultz in Colin Nutley's set of Cabaret at the Stockholm City Theater . In 2014 Malmkvist participated in the musical Flashdance at the Chinateatern where she played the role of Hanna. Sven Wollter and Malmkvist meet again on stage in 2015 in the Riksteatern's set of Ylva Lööf's comedyEvening topic LOVE .

On film, Malmkvist starred as Eivor in Warning for the Jönsson League (1981).

She has toured extensively in the national parks and has done several own pub shows . In the mid-1990s, she performed at the Hamburg Stock Exchange in Stockholm with Lill-Babs and Wenche Myhre . In 2004 she again performed in the Melodifestivalen , that time together with Towa Carson and Ann-Louise Hanson . They participated with the song " C'est la vie ", written by Thomas G: son . With seven points, they came in ten in the grand final of the Globe . On July 27, 2004 , the trio participated in Allsång at Skansen .

In 2003 and 2012, Siw Malmkvist participated in the Arlövsrevyn.

In 2003 and 2004 Siw Malmkvist participated in the Diggiloo summer tour.

On June 2, 2004, Siw Malmkvist, Wenche Myhre and Gitte Henning premiered with the show Gitte Wenche Siw - Die Show , which was played in Germany, Austria and Switzerland. They toured around it for four years until they ended in Kiel in June 2008 after 350 performances and many appearances in television.

In 2008, Malmkvist participated in the TV4 program Körslaget . Team Siw became the first driver to leave the competition on April 5. During the 2008/2009 season, Malmkvist competed in the TV program On the track together with David Bexelius . In the 2009/2010 season she participated with Meg Westergren , Björn Ranelid , Kjell Bergqvist and Tommy Körberg in SVT1 's Stars at the castle , where Siw Malmkvist was the main character in the first program of five. In 2010-2011 she toured with Lill-Babs and Ann-Louise Hanson under the name Three ladies .

In September 2010, Siw Malmkvist released his memoir, Thin Records of Me .

In 2011 she participated in Allsång at Skansen where she sang a potpourri of her songs, which she received standing ovations from the audience.

In 2012 she was part of the genealogy program " Who do you think you are? ". Where she found out that her ancestors were, among other things, soldiers in the Battle of Poltava and also that she had snapping males in the genus that were with the Loshultskuppen when the Swedish War Office was stolen.

In 2013 she was again in the Melodifestivalen together with Towa Carson and Ann-Louise Hanson , but not as a competitor but as an opening act and break entertainment, in the second competition.

Siw Malmkvist was married in 1963-1969 to Finnish musician Lasse Mårtenson . Together they have a daughter. Malmkvist has been living with the actor Fredrik Ohlsson since 1971. They have in common the son Henrik Ohlsson (singer in Münning and Baba Guesthouse ), born in 1973.

Siw Malmkvist has recorded around 600 songs in ten different languages ​​(Swedish, English, Finnish, Norwegian, Danish, German, Dutch, French, Italian and Spanish) and has had 2012 songs on the Swedish peak . Among her many finds include: "Jazz bacilli", "Girls in the back of the car", "Clean my heart", "Wear and toss", "Cheese of happiness", "Mom is like her mother", "Same old song" and " The rain is just pouring down ". The debut at Svensktoppen took place on March 17, 1963, when "Gulle dough" became list two . Her most successful year at the Swedish summit was 1967, when she managed to place ten tunes on the list.

Big TY to Music on Vinyl