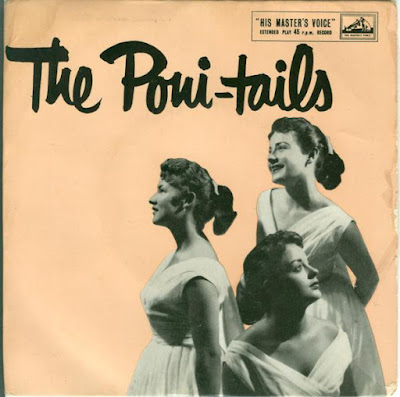 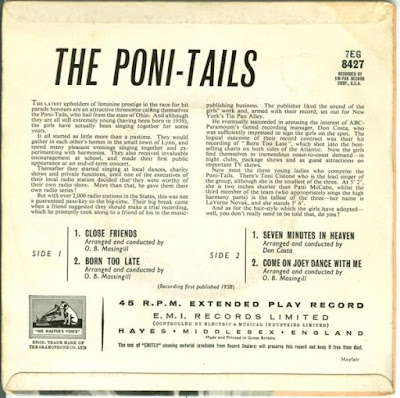 The Poni-Tails were an American girl group from Lyndhurst, Ohio. Their major hit was "Born Too Late" in 1958.
Formed in a suburb of Cleveland, Ohio, the Poni-Tails - Toni Cistone, Karen Topinka and Patti McCabe (Patricia Ann McCabe, July 6, 1939-January 17, 1989) - started singing at Brush High School, which they all attended. Tom Ilius, a music publisher, had them signed to a local record label, Point Records, which released their first single, "Your Wild Heart" b/w "Que la Bozena" (the latter of which was written by the group). "Heart" was covered by the then-15-year-old Joy Layne and became a nationwide hit. The next release was "Can I Be Sure" on Marc Records, which was not a success; following this release Topinka left the group and was replaced by LaVerne Novak.

Soon after this the group signed to ABC-Paramount and released "Just My Luck to Be Fifteen", a flop. Following this was "Come on Joey, Dance With Me" b/w "Born Too Late". The B-side was the one that caught the attention of radio DJs and became the group's biggest hit, reaching #11 on the U.S. R&B singles chart and #7 on the Billboard Hot 100 in 1958. Follow-ups "Seven Minutes In Heaven" (#85 Pop) and "I'll Be Seeing You" (#87 Pop) fared less well, and the group's last single, 1960's "Who, When And Why", did not chart.

ABC-Paramount attempted to sign the group to a further five-year contract, but they turned it down. The members left the music industry and pursued careers in other fields in Ohio. They reunited to play a Cleveland festival, Moon Dog Coronation ball, in 1997. A CD released by Poni Records with 12 tracks credited to the Poni-Tails contains only one Poni-Tails song ("Born Too Late") and 11 tracks recorded by other groups.

In 1991 LaVerne (Novak) Glavac was working for a real estate agent in Mentor, Ohio, and had five grandchildren. Toni (Cistone) Costabile was working at a high school in Shaker Heights, Ohio. Patti (McCabe) Barnes died of cancer on January 17, 1989. Tom Illius subsequently became a top executive with the William Morris Agency in Los Angeles, California. He died on September 7, 2011, in Los Angeles.