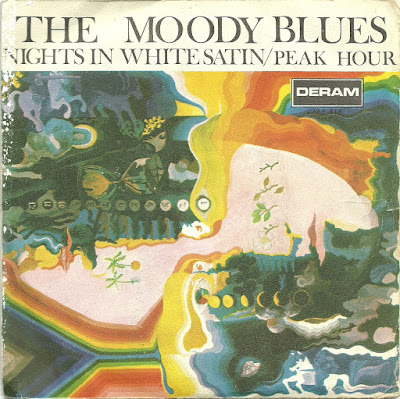 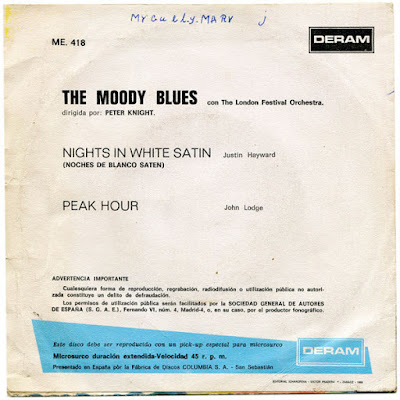 Continuing The Singles Collection is.....

My Favourite Song of All Time is....

"Nights in White Satin" is a song by the Moody Blues, written and composed by Justin Hayward. It was first featured as the segment "The Night" on the album Days of Future Passed. When first released as a single in 1967, it reached number 19 on the UK Singles Chart and number 103 in the United States in 1968. It was the first significant chart entry by the band since "Go Now" and its recent lineup change, in which Denny Laine had resigned and both Hayward and John Lodge had joined.

When reissued in 1972, in the United States the single hit number two – for two weeks – on the Billboard Hot 100 (behind "I Can See Clearly Now" by Johnny Nash) and hit number one on the Cash Box Top 100. It earned a gold certification for sales of over a million U.S. copies. It also hit number one in Canada.

Band member Justin Hayward wrote and composed the song at age 19 in Swindon, and titled the song after a girlfriend gave him a gift of satin bedsheets. The song itself was a tale of a yearning love from afar, which leads many aficionados to term it as a tale of unrequited love endured by Hayward. Hayward said of the song, "It was just another song I was writing and I thought it was very powerful. It was a very personal song and every note, every word in it means something to me and I found that a lot of other people have felt that very same way about it."

The London Festival Orchestra provided the orchestral accompaniment for the introduction, the final rendition of the chorus, and the "final lament" section, all of which were in the original album version. The "orchestral" sounds in the main body of the song were actually produced by Mike Pinder's Mellotron keyboard device, which would come to define the "Moody Blues sound".

The song is written in the key of E minor and features the Neapolitan chord (F).

The two single versions of the song were both stripped of the orchestral and "Late Lament" poetry sections of the LP version. The first edited version, with the songwriter's credit shown as "Redwave", was a hasty-sounding 3:06 version of the LP recording with very noticeable chopped parts. However, many versions of the single are listed on the labels at 3:06, but in fact are closer to the later version of 4:26.

Some versions, instead of ending cold as most do, segue briefly into the symphonic second half ("Late Lament") and, in fact, run for 4:33 (but are also listed on the label as 3:06). For the second edited version (with the song's writing credited to Hayward), the early parts of the song were kept intact, ending early at 4:26. Most single versions were backed with a non-LP B-side, "Cities".

Although it only had limited commercial success on its first release, the song has since garnered much critical acclaim, ranking number 36 in BBC Radio 2's "Sold on Song Top 100" list.

The spoken-word poem heard near the six-minute mark of the album version of the song is called "Late Lament". Drummer Graeme Edge wrote the verses, which were recited by keyboardist Mike Pinder. On Days of Future Passed, the poem's last five lines bracket the album and also appear at the end of track 1 ("The Day Begins").

While it has been commonly known as part of "Nights in White Satin" with no separate credit on the original LP, "Late Lament" was given its own listing on the two-LP compilation This Is The Moody Blues in 1974 and again in 1987 (without its parent song) on another compilation, Prelude. Both compilations feature the track in a slightly different form than on Days of Future Passed, giving both spoken and instrumental tracks an echo effect. The orchestral ending is kept intact, but mastering engineers edited out the gong (struck by Mike Pinder) that closes the track on the original LP.

From 1992 through the early 2000s, the Moody Blues toured with shows backed by live orchestras. When with orchestral accompaniment, they often took the opportunity to include "Late Lament" in the performance of "Nights in White Satin". On these occasions, Edge recited it himself, since Pinder was no longer in the band at that time.

False claim of authorship
In the late 1990s, the UK magazine Record Collector printed a claim that "Nights in White Satin" had not been written by Justin Hayward at all, but that in fact the Moody Blues' management had simply bought the song outright in 1966 from an Italian group called "Les Jelly Roll" and taken credit for it. This claim seems to have arisen from the discovery of a 7" single by the Jelly Roll which carries the words "This is the original version of Nights in White Satin" on the label.

"Les Jelly Roll" was a French band who did a cover version of the Moody Blues song, and had the opportunity to release it in Italy on Ricordi (an Italian record label), a few months before the original was released there. As a joke, they put the now-famous sentence on the cover.

Theme park attraction and other uses

The work was reinterpreted as the focus of Nights in White Satin: The Trip, a dark ride at the Hard Rock Park theme park in Myrtle Beach, South Carolina, U.S.A. The attraction, which included 3D-black light and fiber-optic lighting effects and purpose-made films, was developed by Sally Corporation and Jon Binkowski of Hard Rock Park. Riders entered through a bead curtain and were provided with 3D glasses.

The attraction operated as "The Trip" for the single 2008 season the park operated as Hard Rock Park, but was rethemed as "Monstars of Rock" with the sale and retitling of the park as Freestyle Music Park; "park officials said the experience will be similar but the presentation will be changed." Freestyle Music Park would cease operations after its only season as such in 2009.

Nights in White Satin was the title of a 1987 film directed by Michael Barnard, and starring Kip Gilman and Priscilla Harris. The Moody Blues recording of the song was featured prominently in the soundtrack, particularly during a rooftop dance sequence.

It was produced by Michael Cretu and received mixed reception from music critics. The song was released as the lead single in the spring of 1995 (see 1995 in music), although it failed to match the success of Sandra's previous singles. The song peaked at #1 in Israel (spending two weeks at the top), #17 in Finland, and #34 in New Zealand (Sandra's only charting hit there). In Germany it only peaked at #86, becoming her least successful lead single in that country to date. In the United Kingdom, it failed to enter the chart.

The music video, directed by Angel Hart, showed only close ups of Sandra's face as she was pregnant at the time. She even had to sit during the recording sessions of the album. (Note that the Fading Shades album cover was taken from the music video.)