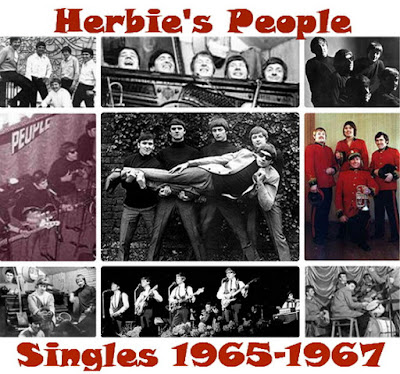 Originally known as Danny Cannon and The Ramrods, Herbie's People came from Bilston, near Wolverhampton in the West Midlands. The band were managed by Bill Bates, whose brother in law was Ken Lewis of The Ivy League. Bill co-wrote "Sweet And Tender Romance" for P.J. Proby as well as "Will I What", the novelty hit by Wendy Richard.

"Sweet And Tender Romance", together with "I Wonder Why", Pete Walton's "She's Crying" and the band's second single "One Little Smile" (1966) were played live on Brian Matthew's Saturday Club radio show. This was followed by two headline shows at The Royal Albert Hall for the charity organisation Toc H.

For the third single, the band had lined up what they thought was a sure fire Carter - Lewis track. The song was a hit, but not for Herbie's People. Despite being pressed up and ready for the shops, the single was shelved when Manfred Mann heard it and decided to record it - the single in question was "Semi-Detached Suburban Mr. James" although it was originally Mr. Jones but changed due to the departure of Paul Jones from the Manfreds. The Herbie's People version, unknown to the band, came out on the American soul label Okeh (7265), whilst in England it was replaced by the song "Humming Bird" (1967) - both singles had the track "Residential Area" (written by the band) on the 'B' side. This song was featured as part of the soundtrack to the British film "Poor Cow".

Another Carter - Lewis track "Thank You For Loving Me" was recorded as the fourth single but was again shelved when it was used as an Ivy League single. An album had been planned around this time but a residency in Germany took it's toll on the band and never materialised.

By 1968, Pete Walton had left the band to be replaced by Pete Stevens and the band had become Just William to record "I Don't Care" and the more psychedelic "Cherrywood Green" for Spark Records. A final single, back on CBS, as The Bullring followed. This was "Birmingham Brass Band" / "Lady Of The Morning Sun" and was featured on the British TV quiz show "The Golden Shot" in the musical part of the show, with the band filmed in Brass Band outfits at various points of local interest around Birmingham!

Various members continued to work in the music business for a few years but it wasn't until 1994 that the band played together again. This was after the chance discovery of one of the Okeh labelled Semi-Detached... 45's turned up, sparking an interest between the various members to do a re-union show for charity, with a second show in 1995.