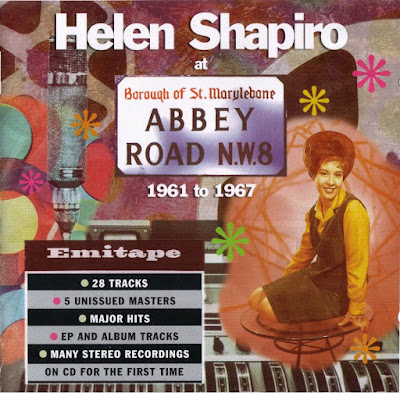 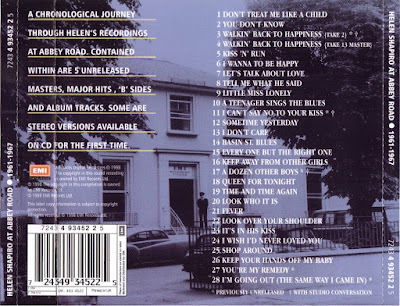 Helen Shapiro began her singing career as a 14 year old in 1961. Hearing her voice on the first cut from Helen Shapiro at Abbey Road: 1961-1967, "Don't Treat Me Like a Child," one would never believe it. She sounds confident and as assured as someone who had been in the business for 20 years. Shapiro had some big hits in the early days of her career: "You Don't Know," "Tell Me What He Said," and the bouncy "Walkin' Back to Happiness." Her early style is very similar to artists like Timi Yuro or Gene Pitney: ultrapoppy musical backing, slightly fluffy songs, and very soulful vocals. She also sounds quite good in a brassy jazz vein; there are some good examples here such as her knockout rendition of "I Want to Be Happy" and her sultry take on "Basin St. Blues." As the decade progressed Shapiro (and everyone who wasn't from Liverpool) found herself shunted off to the fringe. She kept on making great records: a powerhouse version of "Fever," the Drifters-influenced "Look Over Your Shoulder," and the heartbreaking and soulful "I Wish I'd Never Loved You" to name a few. These tracks were all from 1964, the year she seems to have broken away from the formula pop of her first records and branched out into girl-group sounds and generally took a grittier approach. She started covering, quite credibly, Motown tracks like "Shop Around" and also began dipping into Brill Building songbooks, covering tunes like "Keep Your Hands off My Baby" by Gerry Goffin and Carole King. Unfortunately this collection gives this period less coverage than her early hitmaking years. The five or six songs they trot out just leave one wishing for more. The disc ends with the powerful one-two punch of two unreleased tracks: the pounding girl-group shout of "You're My Remedy" and the dramatic string-filled "I'm Going Out (The Same Way I Came In)." These songs give Dusty Springfield, Sandie Shaw, and Lulu a run for their money. It is too bad her career ran out of gas and she pretty much dropped out of sight. One can lament what might have been or curse the powers that were for mismanaging her so fully, but it is a waste of time. Better to just enjoy the music she was able to release. This disc does a fine job of summing up Shapiro's career and is an essential item for any fan of girl pop singers and girl groups.