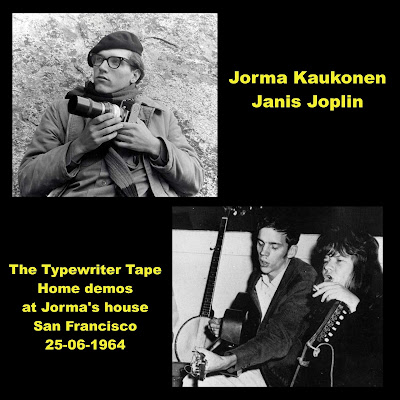 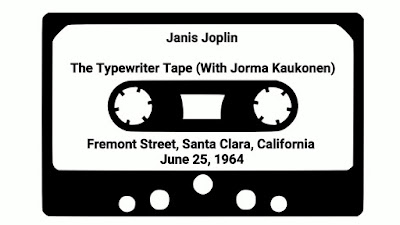 Jorma Kaukonen on Janis Joplin and Recording the 1964 'Typewriter Tape'
by Gabe Meline
May 3, 2016.

Of the many Janis Joplin bootlegs out there in the wild, there's one that holds a special importance for diehard fans. The Typewriter Tape, recorded in 1964 with guitarist Jorma Kaukonen (Jefferson Airplane, Hot Tuna), captures an early Joplin at a pivotal moment, just after her folk-autoharp phase and just before joining Big Brother & the Holding Company.

The Typewriter Tape would go on to attain mythic status, and, as is the norm for bootlegs, the details of its existence have been distorted over the years. In advance of PBS' broadcast of the documentary Janis: Little Girl Blue, I decided to go to the source: Jorma Kaukonen himself, who spoke to me from his ranch in Ohio about that day in 1964, when his wife was typing a letter in the background and he casually recorded some favorite folk-blues songs with an unknown girl from Texas.

Note: Interview has been edited for length and clarity.

The Typewriter Tape was recorded in 1964. Tell me a little bit about where you were at in life.

I was a senior in college, at the University of Santa Clara. I was recently married to Margareta, may she rest in peace, and we were renting a house on Fremont Street in Santa Clara, where the tape was recorded.

That's a good question. My intersection with Janis was fortuitous for me on many levels. She was one of the great blues voices of my time, without question -- I knew that the first time I heard her. To be able to play with her was such an honor. Now, people often say, "You played with Janis," as if we were a duo or touring band or something. It really wasn't like that. When Janis would come down the peninsula and she needed somebody to play with her, then I would play with her. We did a benefit together at the Coffee Gallery in San Francisco. But most of the time, I played with her down the peninsula, whether it was the Tangent in Palo Alto, or the Offstage in San Jose.
Do you remember how you two originally came together?

It was in 1962. I'd just flown out to California, and was going to the University of Santa Clara. I'd been overseas for a while with my parents and I had lived on my own in New York, so when I came back to Santa Clara, back in a dorm again, it was sort of a social regression for me on some levels. I remember I took the Greyhound Bus down from San Francisco, got to Santa Clara and I got into my dorm room. I'm walking around the campus and there's a mimeograph sign about a hootenanny in the upcoming weekend at a place called the Folk Theater.
I went, "Wow. It'll be like I'm back in New York or in Washington, DC." I grabbed my guitar and somehow I got a ride over to San Jose to First Avenue, near First and Edwards. And in that first weekend that I was there, I met Janis, and a guy named Richmond Talbot, who's passed away since, and Jerry Garcia and Pigpen. I think Herb Pedersen might have been there with the Dry Creek Ramblers. A whole host of people that became known later on were there at this little hole-in-the-wall coffeehouse that first weekend.

Being backstage with all these people in this little room the size of a closet, I met Janis and we got to talking. I'd just flown up from the East Coast. We realized that we had some music in common. She asked if I wanted to back her up. The songs that she wanted to do, if I didn't already know them, were sort of intuitive anyway. So that's what we did.

These songs on the Typewriter Tape are mostly all classic blues songs -- "Trouble in Mind," "Nobody Knows You When You're Down and Out." Did you share a love of these songs with Janis?

I've sort of gotten to know Janis' sister Laura a little bit, and what Laura's told me is that Janis was always reinventing herself. The Janis that I knew was that Bessie Smith, bluesy Janis -- and to be honest with you, that's my favorite Janis. When we found that that was the center at that moment of our universe, we just fit together. With me and Janis, like I said, I didn't know her well personally, but we loved the music. Janis was always great any time I was around her, because it was always about the music and we both loved it so much.

On this Typewriter Tape, there's something very different, almost innocent about this Janis than people are used to in her later recordings. How would you describe that difference?

Keep in mind, this is '64. I was barely 23 years old. We were much more innocent I think than a lot of young people today at that age, on many levels. This was pre-hippie, so Janis was sort of a beatnik demimonde. By the time we recorded the Typewriter Tapes, I was married and living in a house.

It was before hard drugs. I didn't even smoke pot until I was 21 years old. All that stuff that everybody takes for granted, the excesses of everything that came later on, they didn't happen then. I wouldn't have known where to get any of that stuff. I wouldn't have had the money if I did know. So on some level, it really was an innocent time. Janis coming down to visit Margareta and myself, and to rehearse with me, was a burst of pure artistic innocence.

How would you describe her singing then? In your own words, what's different about it than the later Janis, when she pushed her vocal chords really hard on Cheap Thrills and Pearl?

She pushed them pretty hard back then too, but not in the same way. I think that her voice ... Once again, listen: nobody cares about Jorma's opinion about what Janis should or shouldn't have been doing. But that's my favorite Janis. Her voice as a blues singer to me was so pure and elegant. She was a great rock singer too, don't get me wrong. I'm not critical of the artistic Janis. We do what we have to do, or what we're called upon to do. But she was just so good at that stuff. Again, it was so pure. Of course we weren't that loud, so it didn't need to be that forceful.

You were a hell of a guitar player for your age, too. What do you hear when you listen to yourself on that tape?

That's good stuff. I'd done only finger picking for maybe three and a half years at that time. What I hear is that I didn't know a lot of left hand. I didn't know a lot of chords or stuff, but what I got from Ian [Buchanan] and the guys that I looked up to was a strong right hand. My groove is really solid. One of the things when I hear myself back then, I go, "Wow. I was pretty good." The pretty-goodness that I hear is in my groove, my right hand.

Technical questions here: the tape, you said, was recorded in Santa Clara at your house on Fremont Street?

That is correct. If you want to know about the tape recorder, it was a Sony TC-100 tape recorder, mono. My first tape recorder. I get people saying, "I can't believe that somebody was playing the typewriter."

And that's your wife at the time, Margareta, typing in the background?

That's her. I met her in Russia the year before, because my grandparents took us back to Russia. She was a Swede. People ask, "Was that a rhythm track?" She was just writing a letter home. Janis and I were rehearsing and Margareta was writing a letter home.
These weren't demos for a record company, or anything?

They were not. Oh, gosh. We were so far away from record companies back then. Janis had come down to rehearse for a gig we had coming up... I think it might've been the Tangent, but I can't really remember what it was.

Fast-forward six years. Do you remember where you were when you learned that Janis had died?

I was at Winterland. That's my best recollection, that we were doing a Winterland show. Carlos Santana was there that night, and I remember he said to me, "Jorma, don't let this happen to you."

How did it affect you? Did you vow to not let it happen to you, or did you reassess your life path?

I can only speak for myself, but it was hard to imagine, up to that point in my life, that anything might kill me. We were in our 20s back then. We were sort of all like Superman. The Janis thing, it was almost unthinkable. How could this happen to somebody who's younger than I am? I didn't know much about hard drugs back then. That didn't have the same relevance to me that it does today. I understand that these things can kill you. I didn't know that back then.

My last question: are you surprised that we're still talking about Janis all these decades later?

No. Absolutely not. I think that she's... I was talking to my wife about it today. It's just so sad that we'll never know what she could've become. I was just at the Grammys earlier this year; we got a lifetime achievement award and I had the chance to talk to Grace Slick and tell her what an honor it was to be able to play music with her. She is one of the great voices of my time, even though she doesn't sing anymore. The same would've been true of Janis. Who knows who she could've become, what she would've become?
She is one of the great ones. You can't take that away from her. But her career was so short. We're starved of some of the richness we'll never get.