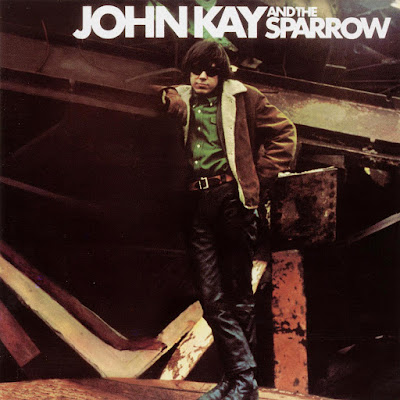 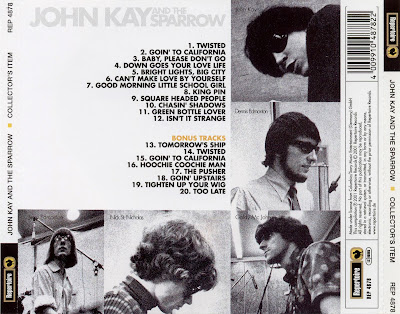 The Sparrows was a Canadian blues rock band that existed in the 1960s. Notable for being the first group to break out musician John Kay into the mainstream, The Sparrows later morphed into the popular heavy rock group Steppenwolf.

Jack London and The Sparrows began as a beat group and played heavily on Dave Marden's English background. Their early repertoire reflected the influence of the “British invasion” and London even went as far as coaxing the others to “fake” English accents, in order to convince the audience that they had just arrived from England. Shortly afterwards, Dennis’ brother Jerry (born Jerry McCrohan, October 24, 1946 in Oshawa, Ontario) replaced the original drummer and Brent Maitland (stage name: Bert Enfield) joined on bass. The group began to build up a local following, playing at various venues, such as the local Jubilee Auditorium (which was owned by the Edmonton brothers’ father).

After moving to Toronto later that year, C.J. Feeney joined on organ. A short while later, Bruce Palmer replaced Maitland, who went to university. This line-up signed to Capitol Records and scored a #3 hit on the RPM chart with debut single “If You Don’t Want My Love”. Palmer, however, soon tired of affecting an English accent and was traded for The Mynah Birds’ member Nick St. Nicholas in January 1965. Around the same time, local jazz musician Art Ayre (born March 18, 1942 in Toronto) replaced Feeney, who formed a new version of his former band, The Spellbinders.

The new line-up was responsible for the band’s lone album and the subsequent singles. Only “Our Love Has Passed”, however, neared the success of the debut single, reaching #7 on the RPM chart in May 1965.

By mid-1965, the group was beginning to progress beyond its early British influences and was starting to incorporate more of a North American blues-rock sound. At the same time, resentment was growing over London's role in the band; he had signed the recording deal so that he would collect most of the group's royalties. As a result, the band separated from London (who went solo) and recorded a final single as The Sparrows, “Hard Times With The Law”, which hit #13 on the RPM chart in August.

During September 1965, The Sparrows added singer/songwriter and guitarist John Kay to the line-up. Art Ayre left at this point to pursue a career in jazz with The Art Ayre Trio (and later Moe Koffman) and ex-The Diplomats and former Mynah Birds keyboard player Goldy McJohn was recruited. The band shortened its name to Sparrow in May 1966.

When the group separated from singer Jack London, The Sparrows recorded a final single on their own before adding new members, vocalist/guitarist/harmonica player and songwriter John Kay and keyboard player Goldy McJohn.

As the new look Sparrows, the group made its live debut at Waterloo Lutheran University (now Wilfrid Laurier University) in Waterloo, Ontario during September 1965 and immediately made an impact with its high energy, blues rock sound. The following month, the band supported Gary Lewis & The Playboys at Massey Hall in Toronto and also found regular work at Chez Monique and the El Patio in the city's Yorkville village.

After his solo career dried up, London moved into production and then became president of the Canadian Association of Real Estate Investors.
Throughout the first few months of 1966, the group consolidated its following on the local club scene. Realising that they needed to attract a wider audience, The Sparrows (as the band was now called) attracted the interest of electronics executive Stanton J. Freeman, who became their manager and arranged for a booking at Arthur, Sybil Burton's hot new club in New York. Freeman then flew them to New York so the A&R people at the major record companies could see them perform. The Sparrows were so well received that over the next five months, they commuted back and forth between Toronto and New York. While in the Big Apple, The Sparrows also appeared at the Barge in Westhampton (The Rascals had played there the previous summer) on Long Island and at another New York club, the Downtown.
Producer David Kapralik, later manager of Sly & The Family Stone, was introduced to Freeman by Jerry Brandt (head of Rock & Roll at the William Morris Agency). Freeman brought Kapralik to see and hear the band. He also heard some demos that the group had recorded at Allegro Sound Studios in New York on April 28, 1966. Impressed by the quality of the songs, he assisted Freeman get a recording deal with Columbia Records. On June 25, the group recorded Dennis Edmonton's “Tomorrow’s Ship”, which was subsequently coupled with the Dennis Edmonton-Nick St. Nicholas collaboration, “Isn’t It Strange” for the group's debut single.

The single failed to chart on its release. The band returned to Columbia's New York studios in October and recorded a follow up, the Edmonton brothers’ “Green Bottle Lover”, which was coupled with the Dennis Edmonton-Nick St. Nicholas collaboration, “Down Goes Your Love Life”. Released the following month, the second single also failed to chart.
By then, the band had abandoned Canada (and New York) for the warmer climates of California. During November 1966, The Sparrows debuted at It's Boss in West Hollywood. Shortly thereafter, they moved to San Francisco where they performed at the Ark in nearby Sausalito as well as the Matrix and the Avalon Ballroom (sharing the stage with The Youngbloods and Moby Grape at the latter).

Sparrow (as they now called themselves) continued to commute back and forth between Los Angeles and San Francisco throughout the first six months of 1967, performing alongside The Doors, The Steve Miller Band and many others. During June, Dennis Edmonton announced his decision to go solo and the band recruited American guitarist Michael Monarch in early July. Edmonton subsequently changed his name to Mars Bonfire.
In 1967 St. Nicholas also joined a Los Angeles-based group called The Hardtimes, who soon renamed themselves T.I.M.E., which stands for Trust in Men Everywhere. Capitol Records signed them to a $500,000 recording contract. After having recorded two albums with Mars Bonfire and bassist Rushton Moreve along with producer/arranger Gabriel Mekler, St. Nicholas's Sparrow bandmates (vocalist/guitarist John Kay, drummer Jerry Edmonton and organist Goldy McJohn) came to see him perform with T.I.M.E. at the Whiskey A Go Go on the Sunset Strip and asked him to leave T.I.M.E. to rejoin them as Steppenwolf.

In 1969 and in the wake of Steppenwolf's success, Columbia Records pulled out of its archives and released the recorded (but not released) 1967 live performance album of Sparrow at the Matrix. This LP release included unknown material as well as a totally remixed version of "Isn't It Strange" (leaving the 45 rpm record single the only place to find the quite different original mix of the song).