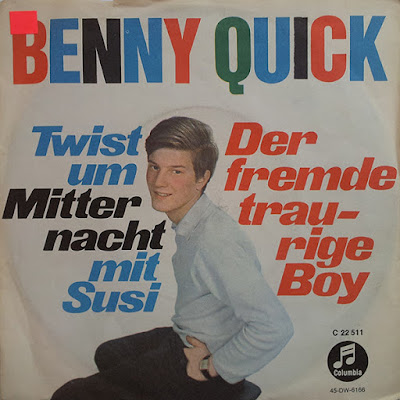 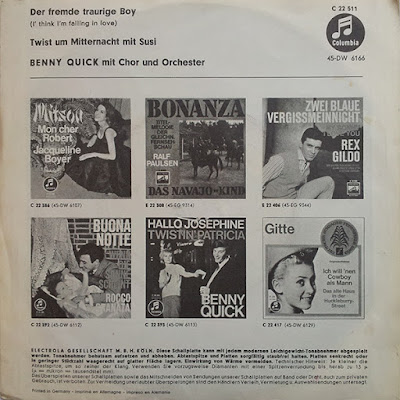 Rolf Müller, so his real name, was born in Essen-Katernberg . As a student, he was enthusiastic about the current rock 'n' roll hits, which he secretly listened to on the radio of the parents. From the late 1950s, he performed under the name Charly from Essen with his guitar and various backing bands in ballrooms and dance clubs in the Ruhr . Although the singer was not yet of age, he won several singing competitions. The well-known for his talent shows emcee Udo Werner gave the young artists 1961 test shots with the renowned record producer Heinz Gietz in Cologne.

In 1962 produced Gietz, who gave the singer a shorthand artist name Benny Quick , whose debut single Motorbiene , which appeared in November 1962 on the Columbia label of the Electrola . The piece developed into a half- strong hymn , placing it only an average 27th in the German music charts . The German text was written by Heinz Hellmer , garnished with motorcycle noises. The original English version Motorcycle by Tico & The Triumphs ( Paul Simon ) made it in the USAhowever, only one week at number 99 in the Billboard Hot 100 . Benny Quicks Motorbiene is still one of the best and most popular doo-wop -Titeln in German and to the evergreens of the German Schlager .

With the following single Hello Josephine (original by Fats Domino ) Benny Quick could still land a modest respectable success, in the hit parades, the interpreter, however, proved to be a one-hit wonder . In addition, the singer was always dissatisfied with his record company, for which he also had to sing hits and undemanding fashion dance and twist numbers. Even with other German cover versions of American Poptitel Quick could not repeat the success of the debut. Quicks Columbia recordings included California Sun ( The Rivieras ), Pretty Woman ( Roy Orbison ),Even without ring (This Diamond Ring) ( Gary Lewis & the Playboys ) and sung by Petra Prinz pieces Stay with me, baby (I Got You Babe) and we go our way alone (But You're Mine) ( Sonny & Cher ). We go our way alone is considered one of the first German protest songs .

After the departure of the band leader Didi Zill Benny Quick took over in 1965 the musicians of the Beat group Didi & His ABC Boys , which became his constant band under the name The Shandios . In the same year Quick took on the band, which included Friedl Kuhnke and Henk van der Horst, recorded the live recorded music album Twens Top for Columbia . It contained German and English cover versions of current hits from The Animals ( The House of the Rising Sun ), The Beatles , Elvis Presley , Cliff Richard or The Shadows .

After the record contract ended at Columbia, Quick was above all successful live with his band. They performed frequently in the restaurant Aunt Olga in Duisburg as well as several times in the Hamburg Star Club . Since the 1970s, Quick worked as a DJ in Frankfurt am Main and surrounding area. From about 1970 to mid-1974, he worked as a resident DJ on weekends in Petterweil in the north of Frankfurt in the disco "Contra". Mid-1970s, he stood in the discotheque opposite in Alt-Sachsenhausen behind the mixer. In 1977, the Nobel discotheque Sounds opened in Frankfurter Kaiserstraße , where Quick was the first DJ.

In the wake of the rock 'n' roll revival in 1979 Benny Quicks Columbia titles were re-released on a LP . In particular, the hit Motorbiene has since repeatedly constituent of Oldie - samplers . In addition, Quick appeared on the title in the 1980s and 1990s again in various television shows. In 1990, the now technically advanced piece " Motorbiene" was included in the soundtrack of the successful film Werner - Beinhart! Use. In 1991, the complete Columbia recordings by Benny Quick appeared on CD .

A few hours before his planned wedding with longtime girlfriend Susanne, Benny Quick took his life on 22 December 1999. His partner found him hanged after returning from a hairdressing visit. Benny Quick was buried on December 30, 1999 in the cemetery Westhausen in Frankfurt am Main.