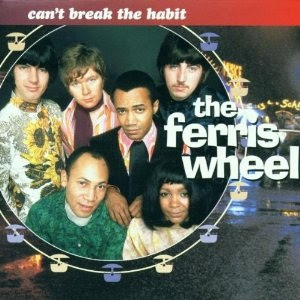 The Ferris Wheel were one of England's great lost musical treasures of the mid- to late '60s -- immensely popular among club audiences, they were never able to translate their ability to win over crowds into chart success, but they made some great records while they were trying. The group came together out of the remnants of two earlier British bands, Emile Ford & the Checkmates and West Five. Dave Sweetman (saxophone), George Sweetman (bass, vocals), and Barry Reeves (drums) had played in the Checkmates, the backing band to Emile Ford (who was half-brother to Dave and George Sweetman), while Mike Liston (keyboards, vocals) had been with a group called the West Five. Trinidad-born Diane Ferraz (vocals) had recorded as part of the duo of Diane & Nicky, in tandem with vocalist Nicky Scott, under the auspices of Simon Napier-Bell, best remembered as the second manager of the Yardbirds; guitarist Keith Anthony filled up the last instrumental spot in the group. The band's original name was Diane Ferraz & the Simon's Triangle, but that arrangement -- with the others designated as Ferraz's backing group -- proved awkward and irrelevant when the whole act gelled as a unit, and Sweetman and Liston also both proved good vocalists in their own right. For a new name, they selected the Ferris Wheel, taking off from Ferraz's family name. 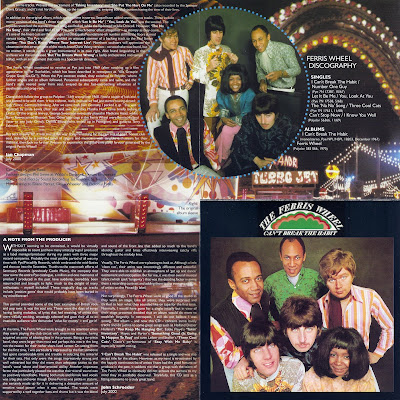 The Ferris Wheel quickly became one of the most popular club acts in England, with their mix of soul music spiced with the influence of the psychedelic music that was starting to spread across the pop world. Vocally, their sound was centered around Motown, but instrumentally they were very much a part of the London scene of the time -- there were no Mellotrons or sitars, but lots of guitar arabesques and extended ornate organ swells, and all of it was woven together well with the soul sound. Ferraz showed herself capable of crossing swords with Diana Ross or Martha Reeves or, together, all three vocalists could sound as smooth as the Fifth Dimension. The group was signed to Pye Records by producer John Schroeder, who was, himself, a major figure in soul music in England, having arranged for the release of many of Motown Records' early singles on that side of the Atlantic. It was Schroeder who decided to break the group by issuing a complete LP, Can't Break the Habit, rather than starting with a single. This was a bold and appropriate decision -- the group's range was so great and its command of various musical idioms so strong, and its act honed so well after six months of playing clubs, that it was well capable of delivering a dozen worthwhile songs. The Supremes, Carla Thomas, and other influences abounded, and all were given a unique spin. A trio of singles followed, drawn from the album, but none of them charted. The sextet stayed together for another year, but there followed a label switch and numerous membership changes over the next couple of years, most notably Ferraz's departure (from the music business as well, to raise a family), to be replaced by Marsha Hunt and then Linda Lewis. The group issued one more album, a self-titled release on Polydor in England and the MCA subsidiary label Uni in America (though they never had any impact in the United States. In subsequent years, George Sweetman passed through the lineup of Medicine Head, while Barry Reeves joined Blossom Toes and Brian Auger & the Trinity, and latter-day drummer Dennis Elliott was subsequently a member of Foreigner. 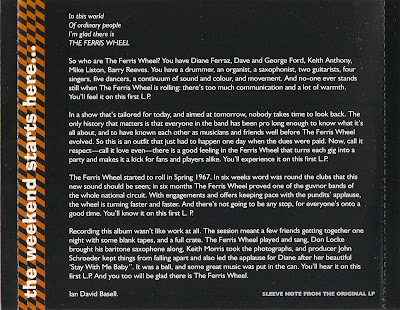 The group was mostly forgotten during the later '70s and '80s, and Can't Break the Habit was one of the rarest LP releases in the Pye catalog. The burgeoning nostalgia for mid-'60s mod and "freakbeat" records, coupled with the ubiquitous Northern soul boom of the late '90s, seemed to make a rediscovery not only called for but likely. In 2000, Sequel Records issued an expanded edition of Can't Break the Habit, complete with annotation that included reminiscences by Diane Ferraz. 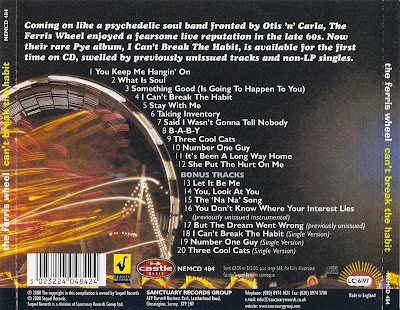 Anyone lucky enough to own this ultra-rare album has grabbed themselves a piece of the finest British psychedelic soul and superb pop-soul in any category. In 1967, while Motown was still coming to grips with the psychedelic boom going on around them, the British-based Ferris Wheel was doing a gently trippy, soaring, and occasionally searing brand of soul music that made them favorites on the club scene in London. "I Can't Break the Habit" is a case in point, a bright, memorable dance number that manages to recall Martha & the Vandellas at their most alluring and ornamented, with a Revolver-style guitar break and choruses as smooth as anything generated by the 5th Dimension. Diane Ferraz's voice is the focal point of the sextet's sound, though two of the guys also turn in solid lead performances -- the group's range is astonishing and their experience shows in the fact that none of the 12 songs on this album sounds like anything around it, and they even make the old Leiber & Stoller chestnut "Three Cool Cats" sound fresh. This was reissued in 2000 by Sequel Records in England with eight bonus tracks (three of them single versions of album tracks) that are as strong as anything on the original album.