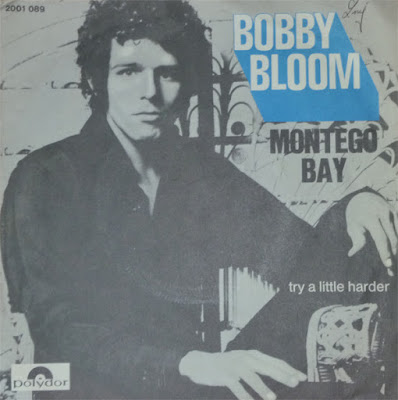 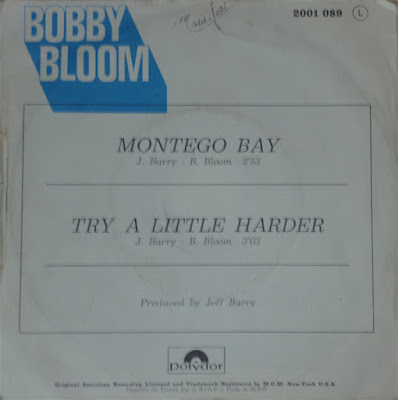 Bobby Bloom was an American singer-songwriter of some accomplishment but, with his life cut short, ended up a one-hit-wonder.
Bobby’s career began in the early 60s in a band named, The Imaginations.
In 1969, he was hired to write and record a Pepsi advertisement. That led to his being signed to a record label and recording his one hit – Montego Bay.
As a songwriter Bobby co-wrote the song Mony Mony (a hit for Tommy James and the Shondells and Billy Idol) and Sunshine, a hit for The Archies.
Bobby suffered depression for much of his life and died aged 28 in February 1974. The official cause of death – accidental shooting while cleaning his gun.

Montego Bay was written by Bobby Bloom and Jeff Barry.
Montego Bay is about the city in Jamaica.
The song peaked at #3 on the UK Singles Chart and #8 on the US chart.
Trivia: In the master tape, Bloom breaks into a verse of Oh, What a Beautiful Mornin’ at the end of the recording. The single version fades out before it, however.  That was done to avoid paying royalties for use of the Rodgers & Hammerstein song (although the full version does appear on the Bobby Bloom Album and has received frequent airplay).
Montego Bay has been covered by a number of artists including New Zealander Jon Stevens whose version hit #1 in New Zealand on January 18, 1980.