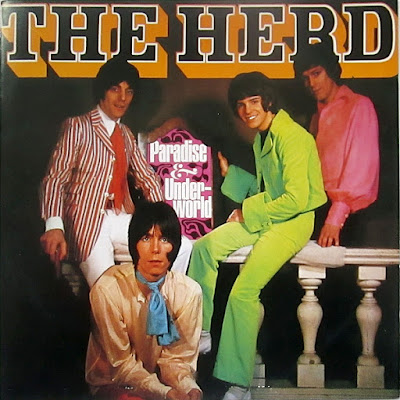 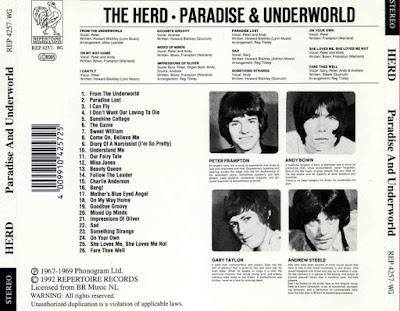 The Herd were an English pop rock, band, founded in 1965 in the UK. In 1966 a 16-year-old Peter Frampton joined as lead singer and guitarist. The band had three UK top twenty hits in the late 1960s, including "From the Underworld" and "I Don't Want Our Loving to Die", before Frampton left in 1968 to form Humble Pie with Steve Marriott. The band broke up shortly after, reforming briefly and unsuccessfully in 1971.

The Herd were founded in 1965 in south London, England, and recorded three unsuccessful singles with Parlophone. In 1966 three members in succession (Terry Clark, Louis Cennamo and Mick Underwood) quit the group and the group got the line-up that made it famous. The singer, Peter Frampton, was 16 when he joined the group in 1966 and had just left school. The other members were a few years older. Parlophone did not want to go on with them, but Fontana was willing to give them a try. They also sent their manager Billy Gaff away and brought in the songwriters/producers Ken Howard and Alan Blaikley instead. This pair had been largely responsible for a string of hits by Dave Dee, Dozy, Beaky, Mick & Tich.

Howard and Blaikley orchestrated for them a unique blend of pop and flower power. After a UK Singles Chart near-miss with "I Can Fly" (April 1967), the haunting "From the Underworld", (August 1967) based on the legend of Orpheus and Eurydice, reached Number 6 later that year with help from copious plays on pirate radio. It was a hit in other countries too. In the Netherlands the song reached Number 3. "From the Underworld" was followed by "Paradise Lost", (November 1967) which made it up to Number 15.  In October 1967 they supported the Jimi Hendrix Experience at The Saville Theatre, London. Their greatest success came with "I Don't Want Our Loving to Die", (March 1968) a Number 5 UK hit single.

With his boyish photogenic looks, Frampton was dubbed "The Face of ’68" by teen magazine Rave.

The last months of 1968 were tempestuous times for the group. Steele left the group, to be replaced by Henry Spinetti. The group dumped their managers Howard and Blaikley, and briefly found a new mentor in Harvey Lisberg who after three months found himself so bogged down with their personnel problems that he politely withdrew his services. Most songs on their first and only album Paradise Lost were written by Peter Frampton and Andy Bown, just like their next single, "Sunshine Cottage".

Dissatisfied with mere teen idol status, and disappointed with the failure of "Sunshine Cottage", Frampton left by the end of 1968 to form Humble Pie with Steve Marriott. The remaining members Bown, Spinetti and Taylor made another flop single, "The Game", then minus Taylor, formed the short-lived Judas Jump with Allan Jones, saxophonist from Amen Corner, and Welsh vocalist Adrian Williams. Taylor, who became a disc jockey, and Steele, reunited briefly for a one-off single "You've Got Me Hangin' From Your Lovin' Tree" in June 1971, to almost universal lack of interest. By the late 1970s Bown became a member of UK rockers Status Quo and both Taylor and Spinetti joined up with Gerry Rafferty.