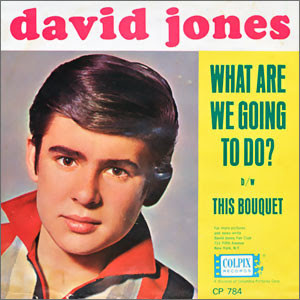 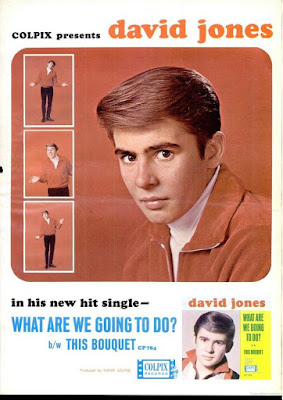 Continuing The International Singles Collection is......

David Thomas Jones (30 December 1945 – 29 February 2012) was an English singer-songwriter, musician, actor and businessman, best known as a member of the band the Monkees, and for starring in the TV series of the same name. His acting credits include a Tony-nominated performance as the Artful Dodger in the original London and Broadway productions of Oliver! as well as a guest star role in a hallmark episode of The Brady Bunch television show and later reprised parody film; Love, American Style; and My Two Dads. Jones is considered a teen idol.

David Thomas Jones was born at 20 Leamington Street, Openshaw, Manchester, on 30 December 1945. His television acting debut was on the British television soap opera Coronation Street. He portrayed Colin Lomax, Ena Sharples' grandson, for one episode on 6 March 1961. He also appeared in the BBC police series Z-Cars. After the death of his mother from emphysema when he was 14 years old, Jones rejected acting in favour of a career as a jockey, apprenticing with Newmarket trainer Basil Foster. He dropped out of secondary school to begin his career in that field. This career was short-lived, however. Even though Foster believed Jones would be successful as a jockey, he encouraged his young protégé to take a rôle as the Artful Dodger in a production of Oliver! in London's West End, a move which changed Jones's life forever. In turn, Jones cared for Foster in his later years, bringing him to the United States and providing him financial support.
Foster was approached by a friend who worked in a theatre in the West End of London during casting for the musical Oliver!. Foster replied, "I've got the kid." Jones was cast and appeared to great acclaim as the Artful Dodger. He played the role in London and then on Broadway and was nominated for a Tony Award. On 9 February 1964, he appeared on The Ed Sullivan Show with Georgia Brown who was playing Nancy in the Broadway production of Oliver!. This was the same episode of the show in which the Beatles made their first appearance. Jones said of that night, "I watched the Beatles from the side of the stage, I saw the girls going crazy, and I said to myself, this is it, I want a piece of that."

Following his Ed Sullivan appearance, Jones signed a contract with Ward Sylvester of Screen Gems (then the television division of Columbia Pictures). A pair of American television appearances followed, as Jones received screen time in episodes of Ben Casey and The Farmer's Daughter.

Jones debuted on the Billboard Hot 100 in the week of 14 August 1965, with the single "What Are We Going To Do?" The 19-year-old singer was signed to Colpix Records, a label owned by Columbia. His debut album David Jones, on the same label, followed soon after (CP493). In 1967 the album was issued in the UK, in mono only, on the Pye Records label (NPL 18178)

From 1966 to 1971, Jones was a member of the Monkees, a pop-rock group formed expressly for a television show of the same name. With Screen Gems producing the series, Jones was shortlisted for auditions, as he was the only Monkee who was signed to a deal with the studio, but still had to meet producers Bob Rafelson's and Bert Schneider's standards. Jones sang lead vocals on many of the Monkees' recordings, including "I Wanna Be Free" and "Daydream Believer". The DVD release of the first season of the show contained commentary from the various bandmates. In Peter Tork's commentary, he stated that Jones was a good drummer and had the live performance lineups been based solely on playing ability, it should have been Tork on guitar, Mike Nesmith on bass, and Jones on drums, with Micky Dolenz taking the fronting role, rather than as it was done (with Nesmith on guitar, Tork on bass, and Dolenz on drums). Mostly playing tambourine or maracas, Jones filled in briefly for Tork on bass when he played keyboards.

Davy Jones performing in 2011
The NBC television series the Monkees was popular, and remained in syndication. After the group disbanded in 1971, Jones reunited with Micky Dolenz as well as Monkees songwriters Tommy Boyce and Bobby Hart in 1974 as a short-lived group called Dolenz, Jones, Boyce & Hart.

A Monkees television show marathon ("Pleasant Valley Sunday") broadcast on 23 February 1986 by MTV resulted in a wave of Monkeemania not seen since the group's heyday. Jones reunited with Dolenz and Peter Tork from 1986 to 1989 to celebrate the band's renewed success and promote the 20th anniversary of the group. A new top 20 hit, "That Was Then, This Is Now" was released (though Jones did not perform on the song) as well as an album, Pool It!.

Monkees activity ceased until 1996 when Jones reunited with Dolenz, Tork and Michael Nesmith to celebrate the 30th anniversary of the band. The group released a new album entitled Justus, the first album since 1967's Headquarters that featured the band members performing all instrumental duties. It was the last time all four Monkees performed together.

In February 2011, Jones confirmed rumours of another Monkees reunion. "There's even talk of putting the Monkees back together again in the next year or so for a U.S. and UK tour," he told Disney's Backstage Pass newsletter. "You're always hearing all those great songs on the radio, in commercials, movies, almost everywhere." The tour (Jones's last) came to fruition entitled, An Evening with The Monkees: The 45th Anniversary Tour.

Jones is the next closest member of the Monkees (to Micky Dolenz) who had worked with the band since its inception. The exceptions have been the new songs recorded in 1986 and since his death.