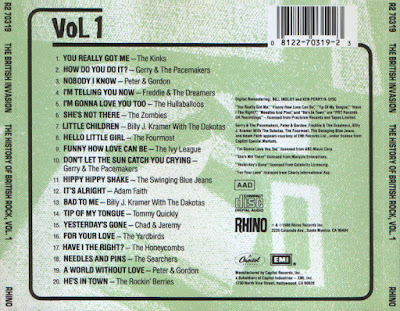 Rhino's nine-volume British Invasion: The History of British Rock is the most exhaustive and essential overview of '60s British pop/rock available. Although the collection doesn't include tracks from the Beatles, the Rolling Stones, the Who, Herman's Hermits, the Dave Clark Five, and the early Animals, their absence doesn't hurt the series, since it spotlights several artists who never had more than a handful of hits, plus many forgotten gems. And there are plenty of major acts here, as well: The Kinks, the Small Faces, the Yardbirds, Donovan, the Hollies, the Zombies, the Spencer Davis Group, the Searchers, Manfred Mann, and Them are all represented by their best-known tracks. The collection runs from the beginnings of Merseybeat to the aftermath of psychedelia, meaning that it chronicles the evolution of British pop/rock quite effectively. But The History of British Rock shouldn't be thought of as simply an educational overview of one of the most vital eras of pop; each volume is fun and exciting, and sounds more like a good time than a history lesson. The series is one of the cornerstones of any comprehensive pop/rock collection.