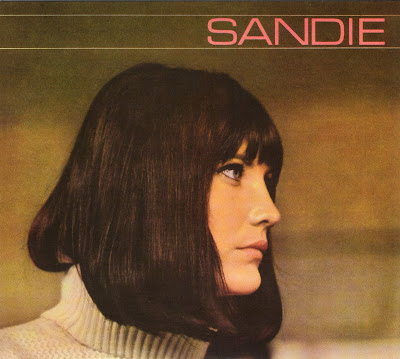 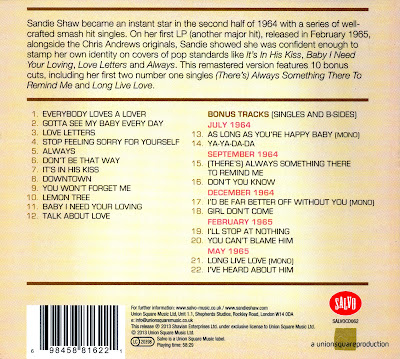 Sandie is the first album by the British pop singer Sandie Shaw. Released in February 1965 on the Pye label, it was her only original album to enter the UK Albums Chart (most of Shaw's success was through her singles) and peaked at Number 3. In the few months prior to the album's release, Shaw had scored two major hits with the Bacharach/David-penned "(There's) Always Something There to Remind Me" and Chris Andrews's "Girl Don't Come"; although neither track was included on this album.

Andrews, who had been signed to Shaw as her main songwriter, contributed four new songs to her debut album. These tracks were later released on an EP entitled "Talk About Love." The other eight tracks on the Sandie album were reworkings of songs made popular by other artists. Sandie was eventually released on the CD format on the RPM label in the 1990s as a double package with her second album, Me, and this package was later released in digitally remastered format by EMI in September 2005 with bonus French-language versions of two of the Chris Andrews tracks.

The album opens with "Everybody Loves a Lover", a song originally made popular by Doris Day (written by Robert Allen and Richard Adler) that was performed by Shaw the first time she met her mentor and discoverer Adam Faith. Song number two is Chris Andrews' "Gotta See My Baby Every Day" (also recorded by Adam Faith) followed by "Love Letters," written by Victor Young and Edward Heyman and originally made popular by Ketty Lester. Another Andrews track, "Stop Feeling Sorry For Yourself", is song number four (and also a single by Adam Faith) before a version of Irving Berlin's "Always." Side one ends with the third Chris Andrews track on the album, "Don't Be That Way."

Side two begins with "It's In His Kiss," a fairly recent hit at the time (as was "Love Letters"). It is followed by "Downtown," a recent hit for fellow British vocalist Petula Clark, penned by Tony Hatch. Continuing with the covers, next comes "You Won't Forget Me," written by Sharon Sheeley and Jackie DeShannon as a hit for DeShannon and then Will Holt's "Lemon Tree" (a hit for Peter, Paul and Mary). The penultimate track is a Motown cover of "Baby I Need Your Loving," made popular by the Four Tops and penned by Motown songwriters Brian Holland, Lamont Dozier and Eddie Holland. Side two finishes with the final Chris Andrews composition on the album, "Talk about Love."