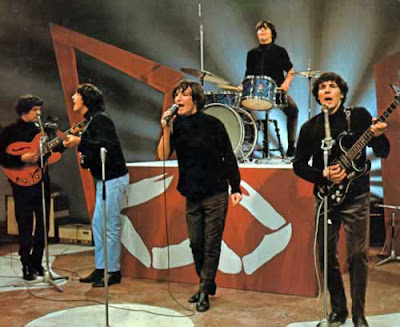 Beat group from Manchester, very popular in the Netherlands from 1964 till 1967.


Some "Wayne Fontana and the Mindbenders" connections.
Besides "Manchester Beat" some Dutch langue info on Koppop a very old dutch site about Beat and Pop groups from Noord-Holland. 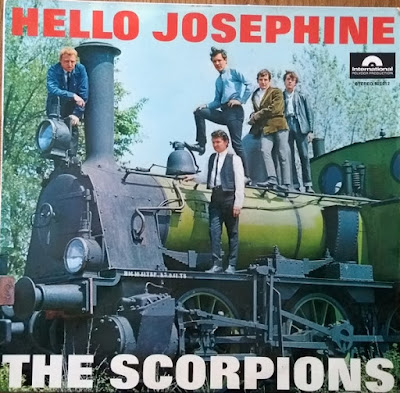 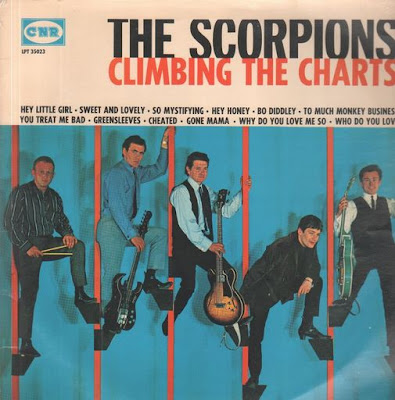 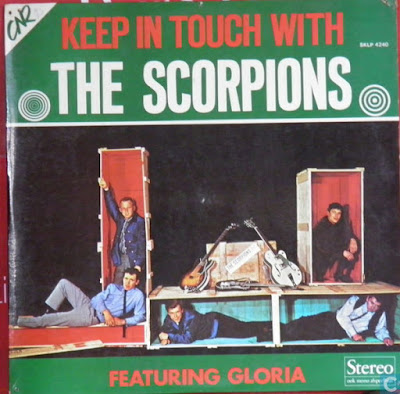 THE SCORPIONS group was established in Manchester in 1961, but failed to gain success in their home country, among the many other beat groups around Manchester in those days. In 1964, they even performed at the Cavern Club in Liverpool, but success and a recording contract was not an the cards. In 1964 therefore, they decided to try their luck in Holland. The beat had by then blown over to Holland but only British bands were managing to reach the hit parade. For that matter, there weren't any Dutch beat groups at that time. Most of the bands were still playing rock & roll and instrumental guitar music. Opportunities galore therefore, for a British band to try their luck.

The Scorpions made their move to Holland in July 1964, and were not to regret it, as there was plenty of work to be found. They were contracted by Jan Vis, moved to Den Bosch and conquered the dance halls throughout the country from there. The record companies were desperately looking for (beat) talent at that time and in August, the Scorpions were contracted by CNR. Produced by ADDIE KLEYNGELD, their first single was released in August: "RIP IT UP"/"BYE BYE JOHNNY" (CNR 9715). At that time, the Scorpions line up was: PETER LEWIS vocals, RON POSTHILL bass, BRIAN POSTHILL, solo, TERRENCE MARTIN rhythm, IAN LUCAS drums. Unfortunately, the single was not a hit and CNR therefore released two more of the group's singles, simultaneously, in October: "SOME OTHER GUY"/"JUST ONE LOOK" (CNR UH 9722) and "NOT FADE AWAY"/"WHAT'D I SAY" (CNR UH 9723). Once again, the sales figures were not spectacular, though the records were promoted intensively by Radio Veronica and Radio Noordzee (from the REM Island). The 4th single by the group was released in December and was to be their ticket to eternal fame. Single (CNR UH 9729) contained the numbers "HELLO JOSEPHINE" / "AIN'T THAT JUST LIKE ME". The single entered the Veronica Top 40 an 20th February 1965 and stayed there for no less than 33 weeks, 13 of which were in the top 10. Number 2 was the top Position reached. In May, Josephine was joined by Ann Louise fьr 2 weeks. The single "ANN LOUISE" / "BABY BACK NOW" (CNR UH 9740) had been released in December but without success. After the hit "Hello Josephine", "Ann Louise" was re-released in May but didn't progress any further than no. 36. "GREENSLEEVES" / "HEY HONEY" (CNR UH 9767) was released in June and stayed in the top 40 for 5 weeks from 24th July 1965 onwards, reaching no. 22. It is surprising that this number lasted so long in the Charts, as it was not particularly original and was performed in much the same way as "Hello Josephine". Although all the Scorpions' singles were very similar and, with the exception of "Hello Josephine", did not seil particularly well, the group was warmly received an stage. their act and music were reasonably wild, which resulted in enthusiastic reactions from the audience. There were even occasions when the audience were so wild that the group didn't last for longer than three numbers. In the summer of 1965, at the peak of their success, the group's working permit ran out, forcing them to return home to England. They were not to be absent for long, returning in September, to Bergen this time. The first main performance was the "TIENER TOP SHOW" in the Hague on 12th September. However, the audience soon discovered that, of the original Scorpions, only PETER LEWIS and drummer IAN LUCAS were left. The group was not in harmony at all and were totally shadowed during this show, by the newly formed band, Golden Earring! The new members of the group were guitarist GRAHAM CAUNCE, bass player DAVE VERNON and organist ROY SMITH. The group's first four singles were released together with the numbers "JOHNNY B GOODE" and "KEEP A KNOCKING" in May 1965 on the "HELLO JOSEPHINE" album (CNR UH 5000). The new formation headed straight for the studio and October saw the release of a single ("SO MYSTIFYING"/"HEY LITTLE GIRL" and an LP "THE SCORPIONS CLIMBING THE CHARTS" (CNR UH 35023) which included the last 2 singles. The new Scorpions had much more of a beat sound than the R&R Scorpions of the first LP, but they could no longer climb the charts. In November, they appeared at the GRAND GALA DU DISQUE, together with Lucille Starr, Wayne Fontana, Unit 4+2 and (their most proud moment, so they told me later) THE EVERLY BROTHERS. The group headed downhill fast after that.

In December, the single "BABY BABY BALLA BALLA" /"I'VE GOT MY MOJO WORKING" (CNR UH 9788) was released, which only gained its no.17 position in the Top 40 thanks to the sales figures being added to those of the version by CHUBBY CHECKER & THE MASKERS, THE SORROWS. In that same month, IAN LUCAS left the group to join the Dutch MARKS band, the working permit expired again and back they went to Britain. On returning in 1966, the group settled in Hotel Benelux in Wernhout, whose owner Jan Hesseling became their manager Lucas' place was taken over by TOMMY UTHANK. A tour of Germany, Denmark and Spain followed. In the course of 1966, 3 singles were released and promoted enthusiastically (in Kink and Hitweek, for example) out they would not sell. "SWEET AND LOVELY"/"GLORIA" (CNR UH 9825), "TOBACCO ROAD"/"STAND BY ME" (CNR UH 9858) (as THE NEW SCORPIONS) and "THE NANA SONG"/"TOO MANY LOVERS" (CNR UH 9878). Yet another LP was recorded "KEEP IN TOUCH WITH THE SCORPIONS" (CNR UH 4240) but just as the LP had been released, the police discovered that the group had been working here for a number of months without a permit and they were put out of the country without further ado. CNR no longer took the trouble to promote the album further and the group disbanded in Britain. In Holland, the only time we're ever reminded of them is when "HELLO JOSEPHINE" is played for the umpteenth time on our radio.
Pete Lewis died on January 2nd 1985.