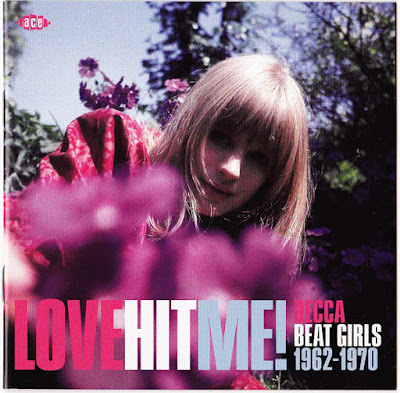 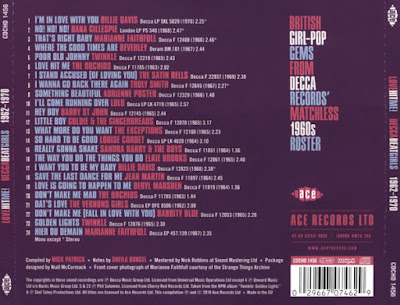 Once the British pop boom took hold in the wake of the Beatles in 1962, Decca compensated for their Fab fumble by signing a lot of acts, including a bunch of female singers. Ace's 2016 compilation Love Hit Me! Decca Beat Girls 1962-1970 chronicles a lot of these signings, including such stars as Lulu, Marianne Faithfull, and Twinkle (the latter's "Golden Lights," later covered by the Smiths, is featured here), but the fun of the collection is how it rounds up singers who didn't enter the history books even if they happened to have hits at the time. There are some sonic constants -- big beats, blasts of brass, swirls of strings, tambourines out of Tamla, fuzz guitars, a transatlantic dilution of the Wall of Sound that remains potent -- so this holds together, but what's fun is digging out particular favorites. Beverley's "Where the Good Times Are" contains an insistent blissed-out R&B rush, the Orchids bring the Ronettes to Britain for "Love Hit Me," the Vernons Girls' "Dat's Love" is a bizarre sendup, and Sandra Barry & the Boys' "Really Gonna Shake" is an absolute raver, a single that's worth the price of admission. Other songs provide a similar kind of buzz, and the reason why Love Hit Me! is worth a listen is how the whole package provides a vivid flashback anchored by enduring pop 45s.