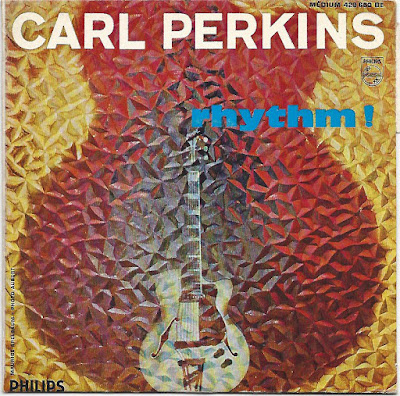 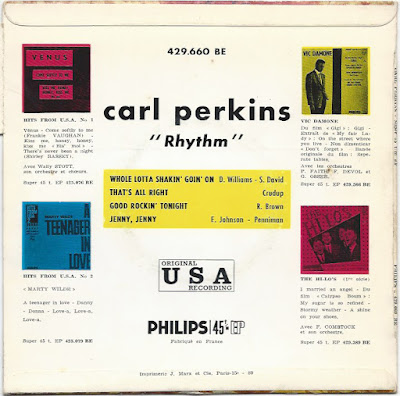 Carl Lee Perkins (April 9, 1932 – January 19, 1998) was an American singer-songwriter who recorded most notably at the Sun Studio, in Memphis, beginning in 1954. Amongst his best-known songs are 'Blue Suede Shoes', 'Matchbox' and 'Everybody's Trying To Be My Baby'.

According to Charlie Daniels, "Carl Perkins' songs personified the rockabilly era, and Carl Perkins' sound personifies the rockabilly sound more so than anybody involved in it, because he never changed." Perkins's songs were recorded by artists (and friends) as influential as Elvis Presley, the Beatles, Jimi Hendrix, Johnny Cash and Eric Clapton which further established his place in the history of popular music. Paul McCartney claimed that "if there were no Carl Perkins, there would be no Beatles."

Perkins was born near Tiptonville, Tennessee, the son of poor sharecroppers, Buck and Louise Perkins (misspelled on his birth certificate as "Perkings"). He grew up hearing southern gospel music sung by white friends in church and by African-American field workers when he worked in the cotton fields. Beginning at the age of six, during spring and autumn, school days would be followed by a few hours of work in the fields. In the summer, workdays were 12 to 14 hours, "from can to can't." Perkins and his brother Jay together would earn 50 cents a day. All his family members worked, so there was enough money for beans and potatoes, tobacco for Perkins's father, and occasionally the luxury of a five-cent bag of hard candy.
Perkins was recruited to be a member of the Lake County Fourth Grade Marching Band. Since his family was too poor to afford them, Lee McCutcheon, the woman in charge of the band, gave him a new white shirt, cotton pants, a white band cap and a red cape.[10]

In January 1947, the Perkins family moved from Lake County, Tennessee, to Madison County, Tennessee. A new radio that ran on house current rather than a battery and the closeness to Memphis exposed Perkins to a greater variety of music. At age fourteen, using the I-IV-V chord progression common in country music of the day, he wrote a song that came to be known around Jackson as "Let Me Take You to the Movie, Magg" (the song later persuaded Sam Phillips to sign Perkins to his Sun Records label).
Perkins had day jobs during most of these early years, picking cotton and later working at Day's Dairy in Malesus, at a mattress factory and in a battery plant. He worked as a pan greaser for the Colonial Baking Company in 1951 and 1952.

In January 1953, Perkins married Valda Crider, whom he had known for a number of years. When his job at the bakery was reduced to part-time, Valda, who had her own job, encouraged Perkins to begin working the taverns full-time. He began playing six nights a week. Later the same year he added W.S. "Fluke" Holland to the band as a drummer. Holland had no previous experience as a musician but had a good sense of rhythm.

Malcolm Yelvington, who remembered the Perkins Brothers when they played in Covington, Tennessee, in 1953, noted that Carl had an unusual blues-like style all his own. By 1955 Perkins had made tapes of his material with a borrowed tape recorder, and he sent them to companies such as Columbia and RCA, with addresses like "Columbia Records, New York City". "I had sent tapes to RCA and Columbia and had never heard a thing from 'em."

In July 1954, Perkins and his wife heard a new release of "Blue Moon of Kentucky" by Elvis Presley, Scotty Moore and Bill Black on the radio. As the song faded out, Perkins said, "There's a man in Memphis who understands what we're doing. I need to go see him."According to another telling of the story, it was Valda who told him that he should go to Memphis. Later, Presley told Perkins that he had traveled to Jackson and seen Perkins and his group playing at El Rancho.

Years later the musician Gene Vincent told an interviewer that, rather than "Blue Moon of Kentucky" being a "new sound", "a lot of people were doing it before that, especially Carl Perkins."

Perkins successfully auditioned for Sam Phillips at Sun Records in early October 1954. "Movie Magg" and "Turn Around" were released on the Phillips-owned Flip label (151) on March 19, 1955. "Turn Around" became a regional success. With the song getting airplay across the South and Southwest, Perkins was booked to appear along with Elvis Presley at theaters in Marianna and West Memphis, Arkansas. Commenting on the audience reaction to both Presley and himself, Perkins said, "When I'd jump around they'd scream some, but they were gettin' ready for him. It was like TNT, man, it just exploded. All of a sudden the world was wrapped up in rock."

Johnny Cash and the Tennessee Two were the next musicians to be added to the performances by Sun musicians. During the summer of 1955 there were junkets to Little Rock and Forrest City, Arkansas and to Corinth and Tupelo, Mississippi. Again performing at El Rancho, the Perkins brothers were involved in an automobile accident in Woodside, Delaware. A friend, who had been driving, was pinned by the steering wheel. Perkins managed to drag him from the car, which had begun burning. Clayton had been thrown from the car but was not injured seriously.

Another Perkins song, "Gone Gone Gone", released by Sun in October 1955, was also a regional success. It was a "bounce blues in flavorsome combined country and r.&b. idioms". It was backed by the more traditional "Let the Jukebox Keep On Playing", complete with fiddle, "Western boogie" bass line, steel guitar and weepy vocal.

Commenting on Perkins's playing, Sam Phillips has been quoted as saying, "I knew that Carl could rock and in fact he told me right from the start that he had been playing that music before Elvis came out on record ... I wanted to see whether this was someone who could revolutionize the country end of the business."

Also in the autumn of 1955, Perkins wrote "Blue Suede Shoes" after seeing a dancer get angry with his date for scuffing up his shoes.Several weeks later, on December 19, 1955, Perkins and his band recorded the song during a session at Sun Studio in Memphis. Phillips suggested changes to the lyrics ("Go, cat, go"), and the band changed the end of the song to a "boogie vamp". Presley left Sun for a RCA in November, and on December 19, 1955, Phillips, who had begun recording Perkins in late 1954, told Perkins, "Carl Perkins, you're my rockabilly cat now." Released on January 1, 1956, "Blue Suede Shoes" was a massive chart success. In the United States, it reached number 1 on Billboard magazine's country music chart (the only number 1 success he would have) and number 2 on the Billboard Best Sellers popular music chart. On March 17, Perkins became the first country artist to reach number 3 on the rhythm and blues charts. That night, Perkins performed the song on ABC-TV's Ozark Jubilee, his television debut (Presley performed it for the second time that same night on CBS-TV's Stage Show; he'd first sung it on the program on February 11).

In the United Kingdom, the song reached number 10 on the British charts. It was the first record by a Sun artist to sell a million copies. The B side, "Honey Don't", was covered by the Beatles, Wanda Jackson and (in the 1970s) T. Rex. John Lennon sang lead on the song when the Beatles performed it, before it was given to Ringo Starr to sing. Lennon also performed the song on the Lost Lennon Tapes.
After playing a show in Norfolk, Virginia, on March 21, 1956, the Perkins Brothers Band headed to New York City for a March 24 appearance on NBC-TV's Perry Como Show. Shortly before sunrise on March 22, on Route 13 between Dover and Woodside, Delaware, Stuart Pinkham (also known as Richard Stuart and Poor Richard) assumed duties as driver. After hitting the back of a pickup truck, their car went into a ditch containing about a foot of water, and Perkins was left lying face down in the water. Drummer Holland rolled Perkins over, saving him from drowning. He had sustained three fractured vertebrae in his neck, a severe concussion, a broken collar bone, and lacerations all over his body in the crash. Perkins remained unconscious for an entire day. The driver of the pickup truck, Thomas Phillips, a 40-year-old farmer, died when he was thrown into the steering wheel. Jay Perkins had a fractured neck and severe internal injuries; he never fully recovered and died in 1958.

On March 23, Bill Black, Scotty Moore and D.J. Fontana, the members of Elvis's band, visited Perkins on their way to New York to appear with Presley the next day. Fontana recalled Perkins saying, "Of all the people, I looked up and there you guys are. You looked like a bunch of angels coming to see me." Black told him, "Hey man, Elvis sends his love", and lit a cigarette for him, even though the patient in the next bed was in an oxygen tent. A week later, Perkins was given a telegram from Presley (which had arrived on March 23), wishing him a speedy recovery.

On April 3, while still recuperating in Jackson, Perkins watched Presley perform "Blue Suede Shoes" on his first appearance on The Milton Berle Show, which was his third performance of the song on national television. He also made references to it twice during an appearance on The Steve Allen Show. Although his version became more famous than Perkins's, it reached only as high as number 20 on the Billboard pop chart.

Perkins wrote his autobiography, Go, Cat, Go, published in 1996, in collaboration with music writer David McGee in 1996. Plans for a biographical film were announced by Santa Monica-based production company Fastlane Entertainment. was slated for release in 2009.

In 2004, Rolling Stone ranked Perkins number 99 on its list of the 100 Greatest Artists of All Time.

Many of the Beatles' live shows were full of Rock 'N' Roll covers of Carl Perkins songs such as 'Everybody's Trying To Be My Baby', 'Matchbox' and 'Honey Don't'.

Drive-By Truckers, on their album The Dirty South, recorded a song about him, "Carl Perkins' Cadillac". The Carl Perkins Arena in Jackson, Tennessee is named in his honor.

George Thorogood and the Destroyers covered "Dixie Fried" on their 1985 album Maverick. The Kentucky Headhunters also covered the song, as did Keith de Groot on his 1968 album No Introduction Necessary, with Jimmy Page on lead guitar and John Paul Jones on bass.

Ricky Nelson covered Perkins's "Boppin' the Blues" and "Your True Love" on his 1957 debut album, Ricky.

Perkins was portrayed by Johnny "Kid Memphis" Holiday in the 2005 Johnny Cash biopic Walk the Line.

Perkins was honored with the "Lifetime Achievement" award during the Tennessee Music Awards event in 2018 at the University of Memphis Lambuth in Jackson, Tennessee.

The following recording by Carl Perkins was inducted into the Grammy Hall of Fame, which is a special Grammy award established in 1973 to honor recordings that are at least 25 years old and that have "qualitative or historical significance".