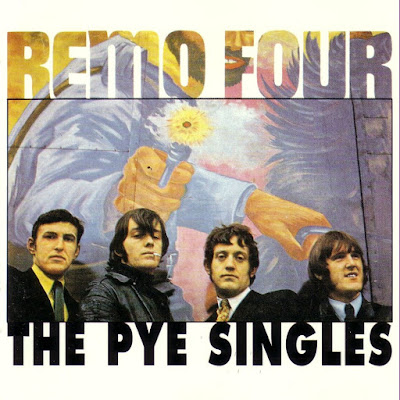 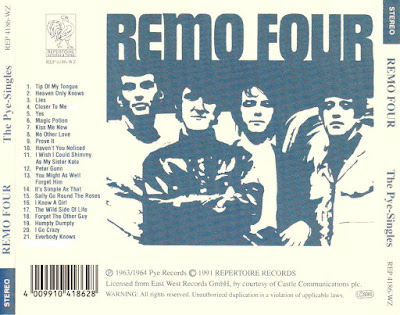 Manley and Andrew formed the Remo Quartet in 1958, with singer/guitarist Keith Stokes (born in 1942) and drummer Harry Prytherch (born 4 August 1941, Liverpool d. 13 October 2015). They progressed from playing local parties and contests to regular hall appearances, and turned professional, changing their name to the Remo Four in summer 1959. They played a mix of vocal harmony material (à la The Everly Brothers), and instrumental numbers in the manner of The Shadows, The Ventures, and Chet Atkins.

The Remo Four were voted Number Three Group in a 1961 Mersey Beat poll, and among their fans were The Beatles, fresh from a season in Hamburg, Germany. Both groups were among the regulars at the Cavern Club during 1961 and 1962, and both shared the bill with Gerry & The Pacemakers, Rory Storm and the Hurricanes, and Ted "Kingsize" Taylor and the Dominoes, at the 1961 "Operation Big Beat", a festival at New Brighton's Tower Ballroom. While The Beatles travelled back and forth to Hamburg, the Remo Four began playing American Air Force bases in France, building their stage and musical experience. A highlight of their early career was sharing the stage with the Shadows, in the latter's only Cavern Club appearance. Johnny Sandon joined the band as vocalist in 1962, and stayed for two years.

In early 1963, Prytherch decided to get married and find a regular job, and Roy Dyke took his place in the band. That year the band signed up with Epstein's NEMS Enterprises and acquired a new lead singer, Tommy Quickly, and a recording contract with Piccadilly Records, backing Quickly on Lennon and McCartney's "Tip of My Tongue" and other songs. The band also released instrumentals, including a driving rendition of Henry Mancini's Peter Gunn theme.

Different members came and went, including songwriters Wayne Bickerton and Tony Waddington (who later joined Pete Best in a group, that moved to America), and Tony Ashton (keyboards/vocals), who replaced Don Andrew, with Rogers moving to bass. Another NEMS artist, Billy J. Kramer, became a frontman for the band, which adopted the name "The New Dakotas" while backing him. Despite their talent and track record, the band's success in the record market was limited, and most of their work came as backing musicians, or as the house band in German clubs, including the Star-Club in Hamburg. They released an album, Smile!, on the Star-Club's own label in 1967, featuring elements of rock and jazz.

Late in 1967, Beatle George Harrison hired the Remo Four as his backing band for part of his first solo project, the soundtrack album to the movie Wonderwall. While the songs were mostly instrumentals, they did record one lyrical song, "In the First Place", with Harrison, which was left in the can until the 1990s. (Ashton, Gardner and Dyke later reworked the song and recorded it as "As It Was in the First Place".) They also became Billy Fury's backing band, in the late 1960s.

Disbanding in 1970, Ashton and Dyke joined guitarist Kim Gardner, formerly of The Creation and The Birds (not to be confused with California rock band The Byrds), to form Ashton, Gardner & Dyke, who later recorded a song called "Ballad of the Remo Four". Ashton later formed Paice Ashton Lord with members of Deep Purple. Manley became an accompanist for singers including Engelbert Humperdinck, and later joined The Swinging Blue Jeans. Don Andrew and Colin Manley appeared with Gerry Marsden (of Gerry & The Pacemakers fame) performing on stage in an episode of the UK TV soap "Brookside" in the 1990s. Manley died of cancer on 9 April 1999, and a memorial concert was held for him that June, with some of his former bandmates performing. Ashton also died of cancer, on 28 May 2001. Keith Stokes died on 19 June 2010, cause unknown. He was living in Wallasey and friends and relatives had been trying to trace him for 15 years, without success.