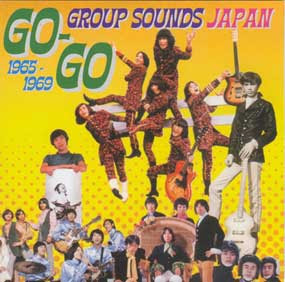 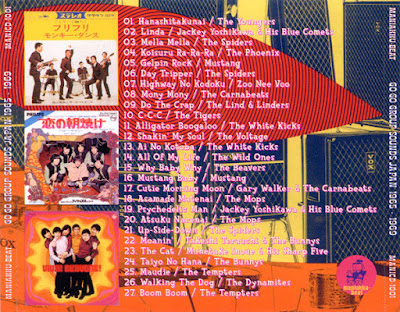 The Spiders were a Japanese rock band formed in Tokyo in 1961, as one of the leading groups of the Group Sounds genre.
Band members were Hiroshi "Monsieur" Kamayatsu (rhythm guitar and backing singer), Jun Inoue (singer), Masaaki Sakai (tambourine and backing singer), Shochi Tanabe (drums), Takayuki Inoue (lead guitar and backing singer), Mitsuru Kato (bass guitar) and Katsuo Ohno (steel guitar and electronic organ). They had many hit singles, made feature films and were popular in the late 1960s and early 1970s in Japan. They toured Europe in 1966, and the United States, including Hawaii, in 1967. Most of the band members are still active in the music industry, with the exception of Monsieur, who died on March 1, 2017 and Takayuki Inoue, who died on May 2, 2018.

Their biggest selling record was "Yuhi Ga Naiteiru" which sold over one million copies, and was awarded a gold disc.

The Mops were formed in 1966 by a group of high schoolers: Mikiharu Suzuki (drums), Taro Miyuki (guitar), Masaru Hoshi (or Katu Hoshi) (guitar), and Kaoru Murakami (bass). They began as an instrumental rock group similar to The Ventures, but soon after forming, Mikiharu Suzuki's brother Hiromitsu joined on lead vocals. The group began to play psychedelic rock at the suggestion of their manager, who had brought home recordings of American hippie groups such as Jefferson Airplane from his trip to San Francisco. The group signed to JVC Records, the Japanese wing of Victor Records, and released a single in November 1967 called "Asamade Matenai", which hit No. 38 on the Japanese charts. In April 1968, the full-length debut, Psychedelic Sound in Japan, followed; the album included covers of "White Rabbit" and "Somebody to Love" by Jefferson Airplane, "Light My Fire" by The Doors, as well as "Inside-Looking Out" and "San Franciscan Nights" by The Animals. They received much press for being the "first psychedelic band" in Japan, and performed with elaborate light shows.