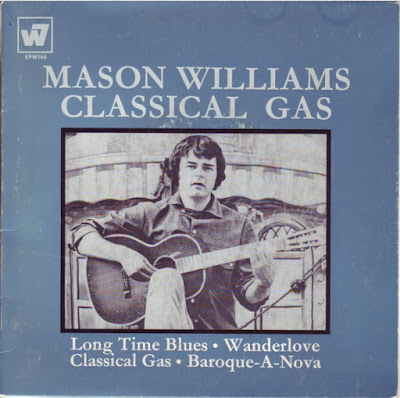 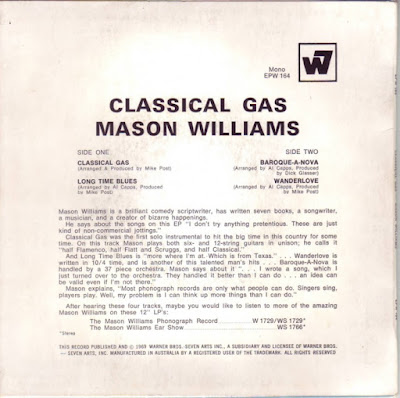 A One Hit Wonder and a Classic in itself...

"Classical Gas" is an instrumental musical piece composed and originally performed by Mason Williams with instrumental backing by members of the Wrecking Crew. Originally released in 1968 on the album The Mason Williams Phonograph Record, it has been re-recorded and re-released numerous times since by Williams. One later version served as the title track of a 1987 album by Williams and the band Mannheim Steamroller.

Originally named "Classical Gasoline", the song was envisioned to be "fuel" for the classical guitar repertoire. The title was later shortened by a music copyist.

Williams was the head writer for The Smothers Brothers Comedy Hour at the time of the piece's release and premiered the composition on the show. Williams performed it several times over several episodes.

After the piece had reached the Top Ten, Williams asked an experimental filmmaker named Dan McLaughlin to adjust a student video montage that he had created of classical art works using Beethoven's 5th Symphony and edit it in time to "Classical Gas", using the visual effect now known as kinestasis. The work, 3000 Years of Art, premiered in 1968 on an episode of the Smothers Brothers Comedy Hour. The song peaked at number 2 for two weeks in August that year, behind "Hello, I Love You" by The Doors. On the US Easy Listening chart, it went to number one for three weeks.

It is sometimes erroneously thought that "Classical Gas" was performed, or even composed, by Eric Clapton. This may be due to the fact that Clapton was musical director of, and played much of the guitar music for, the feature film The Story of Us in which Williams' own solo-guitar re-recording of it, from his 1970 album Handmade, appeared. Clapton has actually never recorded the song.

Williams re-recorded "Classical Gas" as a solo guitar piece on his 1970 album Handmade. This version was re-released by Sony in 2003, after being featured in the film Cheaper by the Dozen, which starred Williams's Smothers Brothers protégé, actor/comedian/musician Steve Martin.