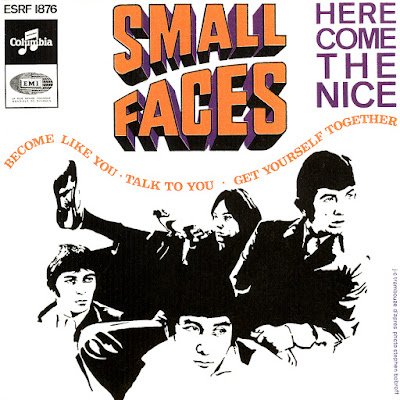 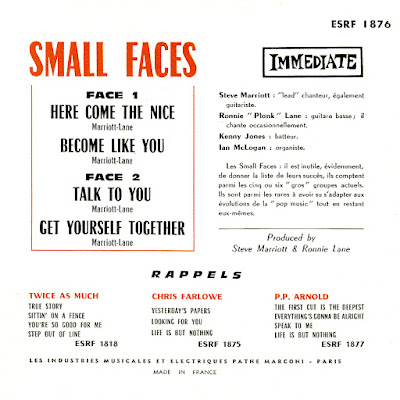 Small Faces were an English rock band from East London. The group was founded in 1965 by members Steve Marriott, Ronnie Lane, Kenney Jones, and Jimmy Winston, although by 1966 Winston was replaced by Ian McLagan as the band's keyboardist.

The band is remembered as one of the most acclaimed and influential mod groups of the 1960s  with memorable hit songs such as "Itchycoo Park", "Lazy Sunday", "All or Nothing", and "Tin Soldier", as well as their concept album Ogdens' Nut Gone Flake. They later evolved into one of the UK's most successful psychedelic bands until 1969.

The Small Faces never disbanded; when Marriott left to form Humble Pie, the remaining three members recruited Ronnie Wood as guitarist, and Rod Stewart as their lead vocalist, both from The Jeff Beck Group, and carried on as Faces, except in North America, where this group's first album (and only their first album) was credited to Small Faces. This practice has continued on all subsequent North American reissues of the album to this day. A revived version of the original Small Faces existed from 1975 to 1978.

Small Faces were one of the biggest musical influences on the Britpop movement of the 1990s. Despite the fact the band were together for just four years in their original incarnation, Small Faces' music output from the mid to late sixties remains among the most acclaimed British mod and psychedelic music of that era. They were inducted into the Rock and Roll Hall of Fame in 2012.