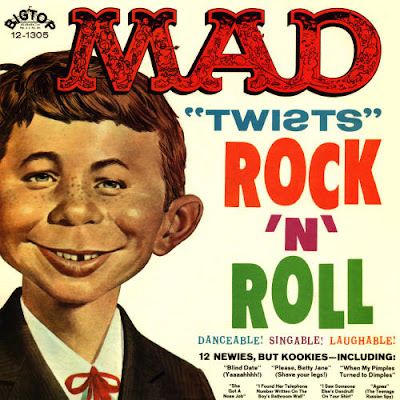 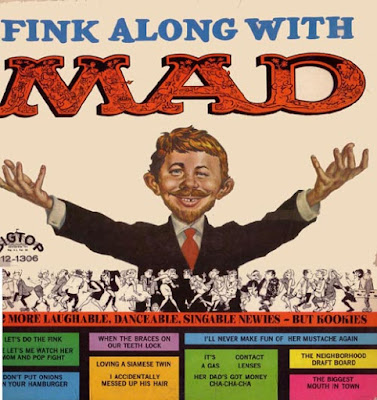 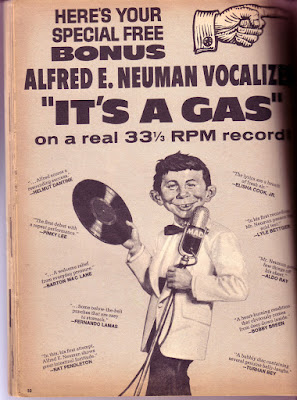 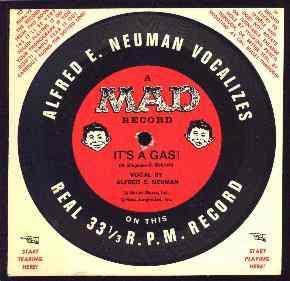 Let’s hear it for Alfred!  Mad Magazine released two great albums in the early 1960s:  Mad Twists Rock´N´Roll  &  Fink Along With Mad
A wonderful symbiosis of Mad humour and rock´n´roll. Produced independently by Norm Blagman and Sam Bobrick who then played it for the Mad staff who then saw to it that it was released. Now, let’s do the pretzel!

MAD Magazine was a revolution when it came along.  The story is well known -- William M. Gaines, publisher of horror comics, decided to produce a comic that was, well, comic.  His first two editors, Harvey  Kurtzman (whose importance to the magazine was overstated) and Al Feldstein (whose importance is often overlooked), created a juggernaut of low brow bust-a-gut humor.

It was wildly successful.  And MAD succeeded just about everywhere. Reprints of the magazine were made into books. There was a successful off-Broadway show (The MAD Show).  They made their mark on the legal system with a Supreme Court ruling that allowed people to write comedy lyrics to popular songs.

And, of course, they did music.  Fink Along With MAD is one result. There were a couple of earlier records:  Musically MAD and MAD "Twists" Rock 'n Roll.

The first single from it was massively popular, even if it never made the charts.  MAD would repackage their best articles into "Annuals." And, in order to get people to buy materials that they probably had already read, they would throw in special features.  For The Worst of MAD #9, they included a flexi-disk of "It's a Gas," billed as "Alfred E. Neuman vocalizes!"   The song was a  peppy tune.  After each musical phrase, the band would stop and you'd hear a burp.  For Mad's audience, that was hilarious.

So Mad also released an album:  Fink Along With Mad.
The title is a reference to the Sing Along with Mitch albums of the period and was filled with classic Mad humor. Mad had a very odd way of looking at teenagers that probably wasn't ever true, but which they constantly used for jokes.

There are twelve songs on each record:

Mad Twists Rock´N´Roll (Big Top LP, 1962)
1. (Throwing the) High School Basketball Game
2. (She Got A) Nose Job
3. Please Betty Jane (Shave Your Legs)
4. Somebody Else´s Dandruff
5. Blind Date
6. Agnes (The Teenage Russian Spy)
7. Let´s Do the Pretzel
8. I´ll Always Remember Being You
9. When My Pimples Turned To Dimples
10. She´s A Serious Teenager In Love
11. (All I Have Left Is) My Johny´s Hubcap
12. Written On the Boys Bathroom Wall

For most of its history, MAD magazine has been at the forefront of gleefully juvenile printed humor. Its pop culture spoofs are legendary, its cartoonists among the finest humorists of their generation. But along the way, MAD created some of the most fun (and suitably warped) musical creations of the 20th century.

After the inevitably-titled 45 “What, Me Worry?” MAD moved up to the big leagues with a full-length LP (pressed on vinyl, not cardboard!) 1962’s Mad “Twists” Rock ‘N’ Roll was written and produced by Norm Blagman and Sam Bobrick. The prolific Bobrick later wrote for Andy Griffith, Get Smart, The Paul Lynde Show, The Smothers Brothers, and Saved By The Bell (as well as a very MAD-esque comedy album called Folk Songs Of Madison Avenue, credited to “The Flagpole Singers”); Blagman wrote and arranged for Tiny Tim, contributed to the original 1968 soundtrack of The Producers, cowrote “Give Me The Right” and “Put The Blame On Me” for Elvis Presley, and would continue making MAD records into the 1980s. The album featured a time capsule of 1962 pop culture preoccupations spoofing James Bond (“Agnes The Teenage Russian Spy”), teenage car-race death ballads (“All I Have Left Is My Johnny’s Hub Cap), and chiropractically-ill-advised dance crazes (“Let’s Do The Pretzel”).

The success of Mad Twists demanded a follow-up, 1963’s Fink Along With MAD, which featured the same creative team and the same clever spoofs, from the heartfelt “Loving A Siamese Twin” to “She Lets Me Watch Her Mom & Pop Fight”. It also features one of MAD’s most memorable—and most revisited—songs, “It’s A Gas”, which artfully combines percussive belching with a great King Curtis sax solo. Sam Bobrick co-writer of "It's A Gas" anotated in albums credits that the musicians themselves provided the burps. The band loved going up to the mike, we would just have them belch, and then we cut the belches in later.  This album is one for the ages. [extract from https://kittysneezes.com/a-mad-look-at-mad-music-809/]

Of course, MAD started declining a bit in the 70s, when it was eclipsed by The National Lampoon. It's still going strong, but seems a bit formulaic, and I find it sad that I usually enjoy Cracked (MAD's second-rate competitor for many years) online more than anything I've read in MAD in years.

Society has changed, of course, but both of these MAD albums are still very funny albums in my opinion. But then again, you could call me MAD, MAD, MAD I say, absolutely MAD