She - Wants A Piece Of You 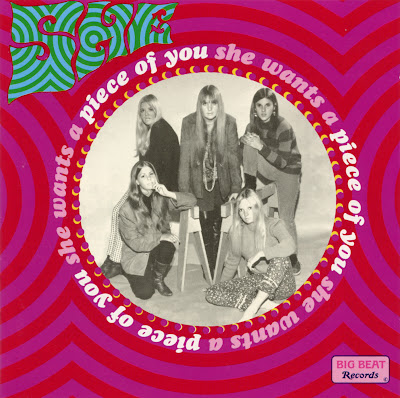 She were one of the few all-female garage psychedelic American bands of the 1960s that played their own instruments and wrote their own material, although their official output was limited to one obscure 1970 independent single. She nonetheless had a lengthy and somewhat complicated history, beginning in the mid-1960s when guitarist and primary songwriter Nancy Ross formed a teen band (with her younger sister Sally on organ) in Sacramento, California. Originally known as the Id, they changed their name to the Hairem and did attract some label interest. The Hairem did not officially release any material in the 1960s, but five songs that they recorded did come out on the She CD compilation Wants a Piece of You in 1999. These cuts, though not as crude as the Shaggs, were nonetheless quite raw and basic, in the manner of many US garage bands of the period. Indeed they're pretty generic, or sub-generic, the chief distinction being that there were extremely few all-female groups playing such music circa 1966, especially with the raunchy attitude evident on cuts such as "Like a Snake."

The Hairem played in San Francisco and Sacramento, at both clubs and air force bases, and after several personnel changes, had changed their name to She by the late 1960s. By this point their music, still not terribly sophisticated, had nonetheless grown more sophisticated, with a greater weight on harmonies and minor-keyed, psychedelic-influenced melodies. They did record an obscure single for Kent in 1970, "Boy Little Boy"/"Outta Reach, " the A-side of which was uncharacteristically soft and poppy, almost to a bubblegumish degree. Other original material written and demoed at this time is on the Wants a Piece of You CD and shows the influence of bands like the Doors and the Jefferson Airplane, although the unschooled raunch is still present. Fact is, though, that while the performances are energetic and the vocals often salacious, the songs aren't that clever or memorable. She disbanded in 1971, Nancy Ross and her sister Sally Ross-Moore being the only members to have stayed the course throughout the entire Hairem-She saga.

She - Wants A Piece Of You 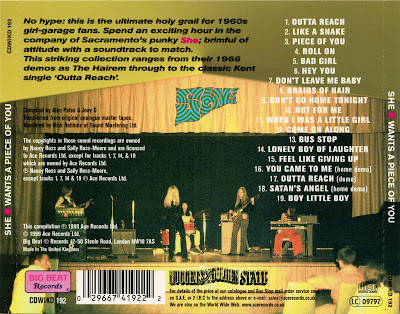 Along with both sides of their 1970 single "Boy Little Boy" and "Outta Reach," this 19-track disc has five circa-1966 recordings by the Hairem, and a dozen unreleased tracks from the late sixties by She themselves. The only reason this might achieve greater notoriety than the usual generic garage/psych release is via the novelty of hearing this raunchy style--an almost totally all-male domain--performed, written, and sung by women. The Hairem cuts are primitive in the extreme, with ominous and minimal melodic content. "The Snake" succeeds via its middle-eastern ambience and outrageously provocative (for the era) vocal and lyrics, but otherwise the songwriting is no great shakes and the performances, particularly the drumming, amateurish (which is not a compliment). The She material is more accomplished, but pretty derivative of late-sixties psychedelic and hard rock trends, though delivered with some admirable aggression. Sometimes the Doors influence is evident in the organ and the Jefferson Airplane influence felt in the harmonies and tunes; "When I Was a Little Girl" has that forlorn early San Francisco psych ballad feel, while the demo version of "Outta Reach" ends with phrasing ripped straight off the end of "White Rabbit." Sure this CD is interesting as a rare example of women performing in this style during this era, but on its own terms the music just isn't special.