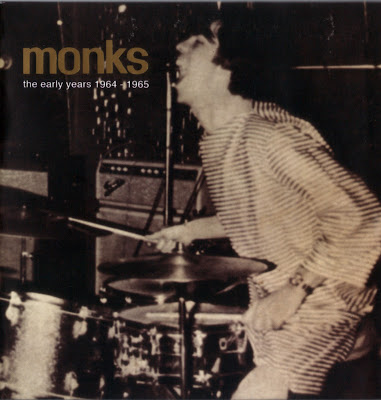 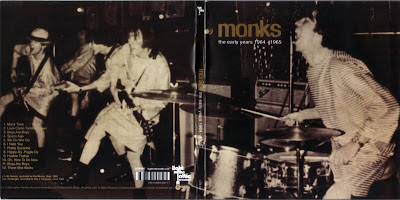 One of the strangest stories in rock history, the Monks were formed in the early '60s by American G.I.s stationed in Germany. After their discharge, the group stayed on in Germany as the Torquays, a fairly standard beat band. After changing their name to the Monks in the mid-'60s, they also changed their music, attitude, and appearance radically. Gone were standard oldie covers, replaced by furious, minimalist original material that anticipated the blunt, harsh commentary of the punk era. Their insistent rhythms recalled martial beats and polkas as much as garage rock, and the weirdness quotient was heightened by electric banjo, berserk organ runs, and occasional bursts of feedback guitar. To prove that they meant business, the Monks shaved the top of their heads and performed their songs -- crude diatribes about the Vietnam war, dehumanized society, and love/hate affairs with girls -- in actual monks' clothing.

This was pretty strong stuff for 1966 Germany, and their shocking repertoire and attire were received with more confusion than hostility or warm praise. Well known in Germany as a live act, their sole album and several singles didn't take off in a big way and were never released in the U.S., it was rumored, because the lyrical content was deemed too shocking. They disbanded in confusion around 1967, but their album -- one of the most oddball constructions in all of rock -- gained a cult following among collectors, and has ironically made them much more popular and influential on an international level than they were during their lifetime. Bassist Eddie Shaw's 1994 autobiography, Black Monk Time, is a fascinating narrative of the Monks' stranger-than-fiction story. ~ allmusic.com
******
The Monks made one of the most aggressively odd albums of the 1960s with their first (and only) studio album, 1966's Black Monk Time; between the minimal, metronomic pounding of the drums, the fierce howl of the guitar, the metallic clank of the amplified banjo, and the nervous bleat of the organ, the five American GI's who created this music while stationed in Germany in the midst of the Cold War created something that (at least at the time) was utterly unique in rock & roll. But the Monks didn't start out sounding quite so fierce; from their humble beginnings as a fairly conventional beat combo called the Torquays, the group evolved into something significantly different, and as guitarist Gary Burger once told a journalist, "It probably took us a year to get the sound right." The Early Years 1964-1965 is an aural document of the Monks as they were trying to sort out the proportions of their singular approach. The bulk of The Early Years is devoted to a ten-song demo cut in 1965 featuring most of the tunes that would latter appear on Black Monk Time, along with a few others that would be left by the wayside. While most of the ingredients of Black Monk Time were here, the almost psychotic zeal and ferocious energy that set the album's performances on edge aren't quite in evident; this music may stomp and clank, but it doesn't bite, and that's a big difference. (The lyrics are different on some songs as well, and sound a bit more polite in this context.) The demos also preserve a thankfully short-lived shtick in which keyboard man Larry Clark played a short introduction reminiscent of a hymn at the beginning of each tune, followed by Burger announcing the selections with more good cheer than they truly merit. The set closes out with both sides of a 1964 single the group cut when they were still the Torquays; the music is admirably taut and while it's a long way from the menace of Black Monk Time, it comes much closer to matching the energy they summoned on the album. Given the long shadow cast by the Monks' small body of work, The Early Years  1964-1965 is a welcome footnote to the singular accomplishment that was their album, but this music (which was previously released on the album Five Upstart Americans) preserves a stop along the way before they reached greatness.~allmusic.com