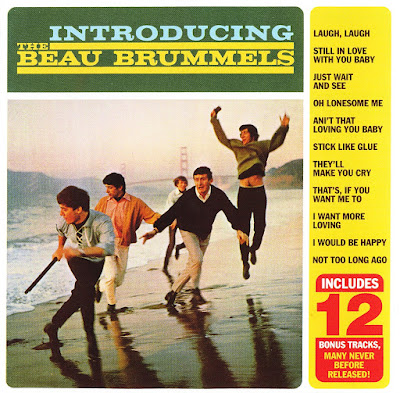 While they only had two big hits, the Beau Brummels were one of the most important and underrated American groups of the 1960s. They were the first U.S. unit of any sort to successfully respond to the British Invasion. They were arguably the first folk-rock group, even pre-dating the Byrds, and also anticipated some key elements of the San Francisco psychedelic sound with their soaring harmonies and exuberant melodies. Before they finally reached the end of the string, they were also among the first bands to record country-rock in the late '60s.

The key axis of the band was formed by guitarist/songwriter Ron Elliott, who penned most of the Brummels' moody and melodious material, and singer Sal Valentino, owner of one of the finest voices in mid-'60s rock. Spotted by local DJ Tom Donahue in a club in San Mateo (just south of San Francisco), the group was signed to Donahue's small San Francisco-based label, Autumn Records, in 1964. With Sly Stewart (later Sly Stone) in the producer's chair, they made the Top 20 right off the bat with "Laugh, Laugh." The melancholy, minor-key original sounded so much like the British bands inundating the airwaves that many listeners initially mistook the Brummels for an English act. The follow-up single, "Just a Little," was another excellent, melancholy number that became their biggest hit, making the Top Ten.

The Beau Brummels made a couple of fine albums in 1965, dominated by strong original material and featuring the band's ringing guitars and multi-part, mournful harmonies. The best of their early work is nearly as fine as the Byrds' first recordings, yet the band was losing ground commercially, partially because Autumn, being such a small label, lacked promotional muscle. "You Tell Me Why" was their only other Top 40 hit, though "Sad Little Girl" and the Byrds knock-off "Don't Talk to Strangers" were excellent singles. The band also shuffled personnel a few times, and Ron Elliott was unable to stay on the road because of diabetes. Autumn was sold in 1966 to Warners, who made the lunkheaded move of forcing the band to record an entire album of Top 40 covers -- ignoring the fact that original material was one of the Brummels' primary fortes.

TriangleRegrouping as a trio, the group recorded a critically acclaimed, more experimental album in 1967, Triangle. Their last Warners LP, Bradley's Barn, found the group branching into country-rock, a year or so before it became trendy. The Beau Brummels re-formed for an unimpressive reunion album in 1975, and Ron Elliott and Sal Valentino continued to make music and work on various projects of their own, though they rarely matched the excellence of the Brummels' vintage work. In 2016, Ron Elliott teamed up with producer Lou Dorren to record a new Beau Brummels album, Continuum, with contributions from Sal Valentino, Ron Meagher, and Declan Mulligan. While John Petersen died in 2008, Elliott and Dorren discovered an unused drum track he had recorded, and it was used as the basis for one of the album's songs. 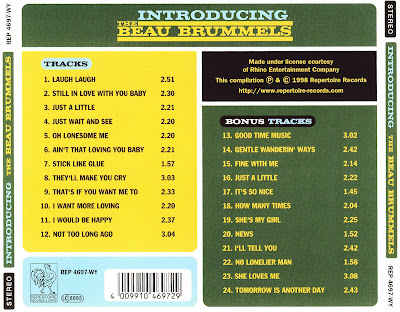 A much stronger debut than the norm for the era. Ten of the 12 cuts are Ron Elliott originals, including the hits "Laugh Laugh," "Still in Love with You Baby," and "Just a Little." The hard-rocking numbers are the weakest, but "Stick Like Glue" and "I Would Be Happy" are fine Beatlesque numbers, and "They'll Make You Cry" is a first-rate moody folk-rocker. The CD reissue adds two bonus tracks, a demo of "Just a Little" and the single "Good Time Music."