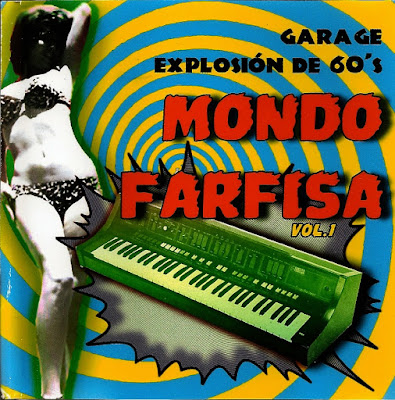 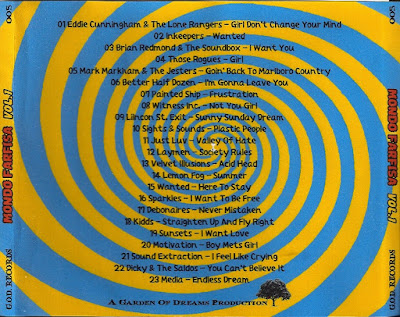 This is a Various Artists compilation,about Psych - Garage Bands during the 60's

Obscure outfit from west Texas, signed to Sea Ell Records and appearing on its short-lived subsidiary Kemo Sabe imprint for one single, the garage punk classic "Girl Don't Change Your Mind," before disappearing. But what a record!--two minutes plus of teen frustrations and yearnings all wrapped up in crunchy guitars and swelling, swirling organ.

03. Brian Redmond and The Soundbox

Another band from Sault Ste Marie are (Those) Rogues, who have a fine and rare double-sider on Algoma, “Wish I Could See You Again” / “Girl”.
Members were Bryan Primeau organ and vocals, Rick Rogers guitar, Terry Davey on saxophone, Harvey Bell on bass and Mike Jargan on drums. Terry Davey left the group sometime before they recorded their 45.

Those Rogues was a garage band from Sault Ste. Marie, Ontario Canada. The band cut two singles in the late 1960's on Algoma records, "Wish I could see you again" and "Girl". Considered the number two band out of the Steel City in the 1960's, the number one group was The Amen, who also cut two singles 'Carnivals and Cotton Candy and Peter Zeus"

05. Mark Markham and The Jesters

06. The Better Half Dozen

The Better Half-Dozen were an American garage rock band formed in New Orleans, Louisiana, in 1965. The group was immensely popular as a cover band in teen dance clubs. They released one single called "I'm Gonna Leave You", which, despite insufficient promotion, became a regional favorite, and has since been uncovered by garage rock enthusiasts.

Alumni of Vancouver, BC's largely unheralded '60s music scene, this quartet consisted of buckskin-clad Bill Hay (vocals), Bob Rowden (guitar), Ken Wain (keyboards) and Barry Rowden (drums). The band cut two late-'60s singles with the London label: "Little White Lies" b/w "Frustration" and "Audience Reflections" b/w "And She Said 'Yes.'" "Frustration" seethes with primal angst. Its structure recalls the Castaways' "Liar Liar," with organ runs from Uzbekhistanm -- or the Hindu Kush. "Lies," Hays said, was "a parody of a swaggering rock star." The band was told to record "something more commercial than 'Frustration.'" They did just that. Frat-house rhythms and sneered, snotty vocals make "Lies" a true punk classic. A monster hit in BC, the single met with less acclaim internationally, despite U.S. airplay. The Painted Ship floundered -- the Rowdens later affiliating with Vancouver group the Look. Both "Lies" and "Frustration" were featured on the 1983 Vancouver Record Collectors' Association rerelease History of Vancouver Rock and Roll, Volume 3.

The Witness Inc. came out of Saskatoon in the central Canadian province of Saskatchewan and immediately became a touring sensation in the western provinces. They released a series of 45s which became increasingly pop after the second. The band finally caught on in Ontario after several years and many personnel changes.The original band consisted of Kenny Shields vocals, Ed Clynton guitar, Dennis Tremeer bass, Les Bateman organ and piano, and Craig Kaleal on drums. I was surprised to learn that the band traveled to New Mexico to record their first 45, probably at Norman Petty’s studio in Clovis.

In early 1969 Lincoln St. Exit, Mike Martinez, Mac Suazo, RC Gariss and Lee Herrerra recorded in Clovis New Mexico at the Norman Petty Studios and the song "Soulful Drufter" emerged from the "Drive It" Album. The album was distributed by Mainstream Records.
Groups like Janis Joplin (Pre Columbia Records) and Amboy Dukes (Ted Nugent’s group) recorded for the label at the same time.  Soulful Drifter gained radio station play and Exit had a hit record along the Great Lakes Area.  The airplay was enough to catch the ear of Motown records in Detroit.

Valley Of Hate / Good Good Lovin' (7") M-S Records MS-216.
This band released just this one obscurity then were gone. It's thought  that they were from Detroit, Michigan but apart from that they're a  mystery.'Valley Of Hate' is a primevil garage protest with strong late 60s folk rock overtones.
It's got some killer fuzz guitar breaks over a two note  organ riff and judging from the lyrics it's most likely about an  encounter in Vietnam.

Only 100 records were pressed. The group kept some copies and the rest were sold at gigs or given away.

Phil Watlington played bass in Pensacola's popular rock and roll combo, The Laymen.  The Laymen were different from other local groups of the area due to their versatility.  Although they also played driving rock and roll, they excelled at harmony, love songs and smooth melodies, and this sound was captured perfectly on their lone 45 single.  Watlington's rock and roll career ended with The Laymen, but he went on to bigger and better ventures; he's currently an author of two non-fiction books, with his first fiction book due for release this year.

The Velvet Illusions, also known as Georgy and the Velvet Illusions and the Illusions, were an American garage rock band formed in Yakima, Washington in 1965. The group, with influences spanning from R&B standards, the British Invasion, to early psychedelia, released five singles in their brief recording career. Despite never breaking out nationally, the band's music has been revived, thanks, in large part, to its inclusion on several compilation albums, most notably Where the Action Is! Los Angeles Nuggets: 1965–1968.

The Lemon Fog were an American garage rock and psychedelic band from Houston, Texas who were active form 1965-1970. They were one of the earliest bands to emerge from the Houston psychedelic scene, and recorded several singles for Orbit Records. They also recorded a number of outtakes and demos which have been posthumously released.

The Wanted released eight songs on six different singles, four on The Detroit Sound and two national releases on A&M.

The names of the band are well-known: they put them on the labels of their 45s. Other information is not easy to come by and I don’t find them mentioned in any detail in my usual sources.

The Wanted Detroit Sound 45 Lots More Where You Came FromAll their releases have excellent songs. “Here to Stay” is an amazingly mature ballad, with a great nasal lead vocal, written by Tim Shea and Chip Steiner.

The Sparkles were an American garage rock band from Levelland, Texas, that were active between 1957 and 1972.[1] However, the most popular version of the band was the line-up that existed from 1965 to 1967, and which recorded the songs "No Friend of Mine" and "Hipsville 29 B. C."

Though affiliated with the fertile Texas garage and psych scene of the 1960s by virtue of their underground classic "No Friend of Mine," the Sparkles dated back to 1957 and continued their performing career until 1972, a longer run than virtually any of their Lone Star State contemporaries. Formed in Levelland, the Sparkles were originally comprised of guitarists Stan Smith and Carl Huckaby, bassist Bob Donnell, pianist Johnny Waller, sibling saxophonists Guy and Jesse Balew, and drummer Gary Blakey. They made their first recordings in 1958 for legendary producer Norman Petty, but the session never saw commercial release.

As part of the Beaumont, Texas teen scene, The Kidds performed at all the area teen clubs and played The Golden Triangle.  Although they had plans to record a single, their lack of a B-side prevented the desire from becoming reality.  Bassist John Schmidt joined the band after its formation, and left prior to its disbanding, but was an integral part of the group’s success.

22. Dicky and The Saldos