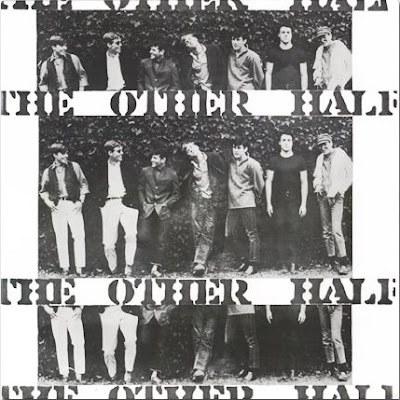 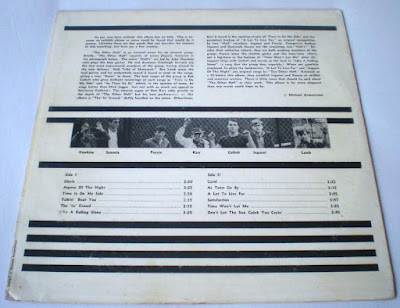 THE OTHER HALF were an obscure Raw Garage Band from 1966 out of Pottstown, Pennsylvania. the group was included some members from another similar Garage Band called The Half Tribe (of Manasseh).

The Other Half members were: "Bob Collett" (vocals), "Andrea Inganni" (vocals), "Don Karr" (bass keys on "Farfisa Compact Organ", "Fender Bass"), "John Hawkins" (bass), "Dominick Puccio" (guitar, "Fender Bass"), "Rex Lamb" (fuzz guitar), "Cranleigh Sammis" (drums). he band The Other Half lasted for just two years (1966-1967) and recorded just one self financed Privately Pressed LP in 1966 - the Self-Titled "The Other Half" album. this LP is Legendary, and is considered to be one of the best Obscure "Garage Rock" Lps from the sixties.

The Other Half album was Recorded in the Spring of 1966 on the top floor of the Oasis Hotel in Camden NJ (just across the river from Philadelphia) in a small for-hire recording studio.

"The Other Half" had a solid Northeastern sound, but with a little more Garage Punk Edge than their regional competition. Their eponymous album "The Other Half" was Released on the 7/2 Records Label # HS-1/2 with only 100 Copies Pressed. the LP included 2 cool originals, and the rest were Rhythm'n'Blues and British Invasion covers performed with a tough edge and in a crude manner, on the rowdy side. ("Gloria" by Them; "Satisfaction", "Time Is On My Side" and "As Tears Go By" by The Rolling Stones; "Time Won't Let Me" by The Outsiders,'Talkin' 'Bout You' by "The Animals" ...etc.).

A second album was planned, to be recorded Spring of 1967, but one of the group members was expelled from The Hill School, a prep school where the group was attending, just days before the recording was to take place.

Tracklist
A1 Gloria
A2 Aspens In The Night
A3 Time Is On My Side
A4 Talkin' 'Bout You
A5 The 'In' Crowd
A6 Like A Rolling Stone
B1 Carol
B2 As Tears Go By
B3 A Lot To Live For
B4 Satisfaction
B5 Time Won't Let Me
B6 Don't Let The Sun Catch You Cryin'
Credits
Bass – John Hawkins (13)
Drums – Cranleigh Sammis, Robert Potter (2)
Guitar, Bass – Dominick Puccio
Keyboards – Don Karr
Lead Guitar – Rex Lamb
Liner Notes – J. Michael Armentrout
Vocals – Andrea Inganni, Bob Collett

Notes
Privately Pressed / Unofficial Release of The Other Half which was recorded in 1966 by this Pottstown, PA Garage Band (not the same group as the California group of the same name).

tags The Other Half