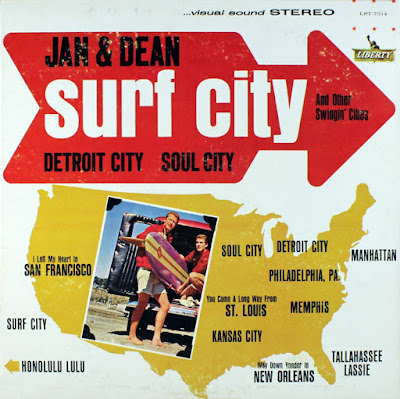 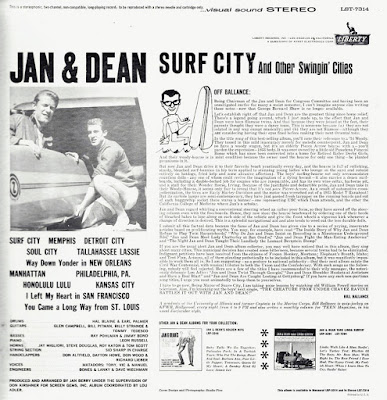 "Surf City" is a song written by Brian Wilson and Jan Berry about a fictitious surf spot where there are "two girls for every boy." It was first recorded and made popular by the American duo Jan and Dean in 1963, and their single became the first surf song to become a national number-one hit.

The first draft of the song, with the working title "Goody Connie Won't You Come Back Home", was written by Brian Wilson of the Beach Boys. While at a party with Jan Berry and Dean Torrence, Wilson played them "Surfin' U.S.A." on the piano. Berry and Torrence suggested that they do the song as a single, but Wilson refused, as "Surfin' U.S.A." was intended for the Beach Boys. Wilson then suggested that the duo record "Surf City" instead, demoing the opening, verse, and chorus. Wilson had lost interest in the song and believed he was never going to complete it himself. Berry later contributed additional writing to the song, while Torrence also contributed several phrases, but never insisted that he be given writing credit.

Released in May 1963, two months later it became the first surf song to reach number one on national record charts, remaining at the top of Billboard Hot 100 for two weeks. The single crossed over to the Billboard R&B Chart where it peaked at number 3. It also charted in the UK, reaching number 26. Before the single, Jan and Dean made music which was largely inspired by East Coast black vocal group records. The success of "Surf City" gave them a unique sound and identity which would be followed by five more top ten hits inspired by Los Angeles surf or hot rod life.

The Beach Boys' manager and Wilson's father Murry was reportedly irate about the song, believing that Brian had wasted a number one record which could have gone to his group, the Beach Boys. Brian later told Teen Beat, "I was proud of the fact that another group had had a number 1 track with a song I had written ... But dad would hear none of it. ... He called Jan a 'record pirate'."