Them (Leave Them All Behind) Compilation (Lockdown) 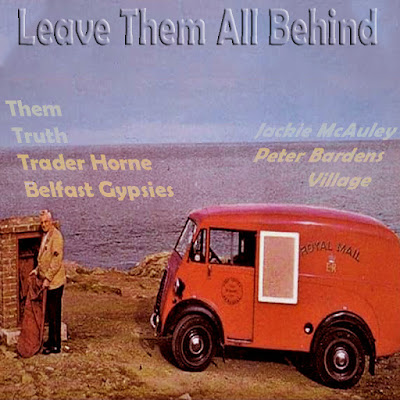 When most people think of the band Them, it's the Van Morrison led band who had huge hits such as "Baby Please Don't Go" and "Here Comes the Night". But, after Morrison quit in 1966 they went on to record several more albums as Them between 1968-1971. The history of Them is quite convoluted, you only have to see the personnel of  the band on their Wiki page to get some idea! This collection focuses on the more prominent members from the many line-ups of the band.

The original Them formed in 1964, which consisted of Van Morrison, Alan Henderson, Ronnie Milling, Billy Harrison and Eric Wrixon. In 1965 ex members Billy Harrison and Pat McAuley formed a rival Them. Legal action by Morrison's Them forced the band to use the name 'Other Them' when performing in the UK. The following year Pat McAuley's brother Jackie McAuley joined the band after Harrison quit. Though never billed as such, the band became known as the Belfast Gypsies (or Gipsies), releasing a couple of singles under that name plus another as 'Freaks of Nature'. They released just the one album in 1967. Many recognise this as an album called "Belfast Gypsies" by Them, others will argue it's titled "Them Belfast Gypsies" by the Belfast Gypsies. For the sake of this collection I've billed the one track by them as Belfast Gypsies!

The original Them relocated to the USA after Morrison left, now consisting of Kenny McDowell (vocals), Jim Armstrong (guitar), Alan Henderson (bass), Ray Elliott (sax/flute/organ) & Dave Harvey (drums). They recorded 2 albums in 1968, "Now and "Them"" and "Time Out! Time in for Them" before splitting up. Armstrong, McDowell and Elliot reunited in 1969 as 'Truth' and recorded a number of demos and soundtrack songs later released as "Of Them And Other Tales" in 1995. Alan Henderson kept the band name Them, releasing in 1970 a self-titled album featuring Jerry Cole on vocals/guitar, and "In Reality" in 1971, featuring Jim Parker on guitar/vocals and John Stark on drums.

Peter Bardens, who was briefly in Them in 1965, formed the band Village in 1968, featuring future Elvis Costello and The Attractions bassist Bruce Thomas and Bill Porter on drums. They released just the one single, "Man in the Moon" in 1969. After this Bardens released the solo album "The Answer" in 1970, which featured Peter Green on lead guitar. Shortly after Bardens went on to join the prog rock band Camel in 1972. Jackie McAuley, after leaving the Belfast Gypsies, joined up with former Fairport Convention vocalist Judy Dyble to form the folk rock act Trader Horn in 1969. This short-lived musical partnership broke up after releasing only one LP, "Morning Way", in 1970.  The same year McAuley issued a self-titled solo album.

I tried to keep the complex history of this band as short as possible, I think I just about succeeded! For more detailed info I suggest you visit the wiki entries on Them and various ex-members. By the way, whatever happened to that original lead vocalist, Van Morrison???

Once more huge thanks to Manerg for finding the photo for the cover art, hopefully most of you will figure out the meaning behind the photo and it's connection to this collection! Info containing track origin & year of release is tagged in the music files and in the download file. Keep safe everybody, many thanks for all the kind comments, and hope you enjoy!