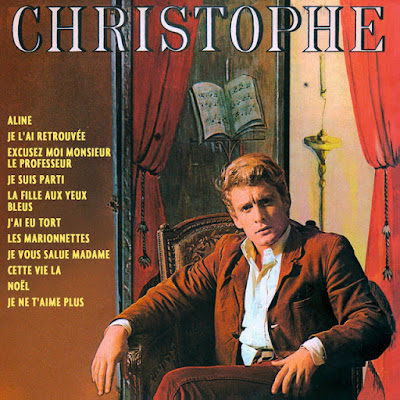 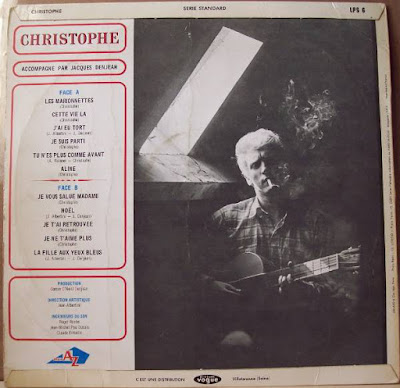 Daniel Bevilacqua (13 October 1945 – 16 April 2020), better known by the stage name Christophe, was a French singer and songwriter. He was born in the Paris suburb of Juvisy-sur-Orge, to an Italian father.
Christophe became famous in the early 1960s with his first hit being "Aline", in 1965. His hits include the song "Oh!... Mon Amour" which he sang in French and Italian. After a small break, he returned in 1971, with Francis Dreyfus launching the Motors record label (Disques Motors) and becoming the producer of Christophe records. The result was the 1973 "Les Paradis perdus". In 1974, he recorded "Les mots bleus" (lyrics by Jean-Michel Jarre).

In 1978, he came back with "Le Beau Bizarre". In 1983, Christophe released another single, "Succès fou", followed by "Clichés d'amour" in 1984 in which he sang 1940s and 1950s classics such as "Arrivederci Roma" and "Dernier baiser", a French version of the Mexican classic "Besame mucho". In 1985, he wrote "Ne raccroche pas" a song which is believed to be about the Princess Stephanie of Monaco. The following year, he wrote the song "Boule de flipper" for Corynne Charby.

In 1996, after a break, he returned with his album "Bevilacqua". In 2001, he released another album Comm' si la terre penchait. In February 2002, Christophe performed, in Clermont-Ferrand, his first live concert in more than two decades, followed by two appearances at the Olympia in March 2002.

Christophe's 1970s song "Les mots bleus" was covered by Thierry Amiel in 2003. In 2011, Christophe took part in a tribute album for Alain Bashung two years after the latter's death. He sang "Alcaline", a song written by Bashung in 1989 for his album Novice.
In 1971, Christophe married his girlfriend Véronique and fathered his daughter Lucie.

He died after being in critical condition due to COVID-19 associated with a previous comorbidity (COPD) on 16 April 2020.