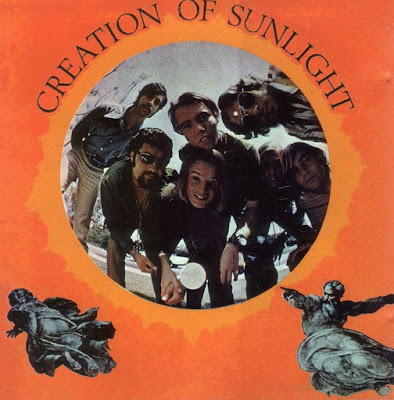 Psychedelic Rock band formed mainly as a studio group in Los Angeles, California, USA in 1967.
The Creation of Sunlight's sound incorporated different aspects of their California contemporaries, such as the cheery nuance of sunshine pop and harder-edge acid rock.
In 1969 they disbanded.

Despite the reissues many are still unfamiliar with this Sunset Strip-style psych wonderama,
so full of 60s summer charm you'll play it over and over. Strawberry Alarmclock's first two
LPs are the obvious reference for these guys and they pull it off with equal talent and
class, not a dull moment.
The perfect summer album. With harmonies to die for, colorful arrangements that highlight
great organ and guitar playing, Creation of Sunlight - Creation of Sunlight
(Windi ST 1001-1002) 1968 R4 and, most of all, an album full of hit-worthy songs, this is an
all-time classic.
Like the similar SAC, at times the oh-so-happy sound veers towards the cheesy, but never
quite pushes it too far.
Instantly memorable, but also with a lot of depth. Every song is a winner. In a better world
they would have been superstars.

A very rare Southern California pop/psych album with dual organ, fuzz and sunshine vibes
similar to Strawberry Alarm Clock. The band were previously known as Sunlights Seven and
recorded an unreleased, acetate-only album in Hollywood: Sunstroke, circa 1967. Their
repertoire largely comprised of early versions of songs re-recorded for the Creation Of
Sunlight album.

Creation of Sunlight's sole album is a second- or third-division piece of late-'60s southern
California psychedelia, although it's not unenjoyable in places. Certainly it will recall the
Strawberry Alarm Clock to many seasoned psychedelic listeners, as this too has a combination of
thick organ and fuzz guitar, as well as material and vocal harmonies that are a rather lighter
shade than the arrangements. It really helps that the lead singing is breezier and a bit higher
than that of many similar groups. The background harmonies have a fullness that smacks not just
of the Strawberry Alarm Clock, but of a few other bands of their time and place, like Clear
Light and (at its poppiest) the Association; the material can also bring to mind some aspects
of the West Coast Pop Art Experimental Band. And then there's that part of "Second Thoughts"
where it veers off from a fairly sunny harmony number and suddenly sounds like the organ
player's trying to imitate Ray Manzarek...so no, it's not the most individual of albums,
even among obscure cult psychedelic ones. But even in the absence of truly fine songs, it's
considerably better than the normal such derivative record of its time and place, with a
likable trippy-if-safe optimism that's too heavy to be sunshine pop, though too lightweight
to qualify as serious underground boldness. 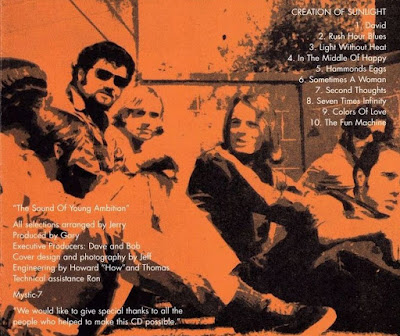