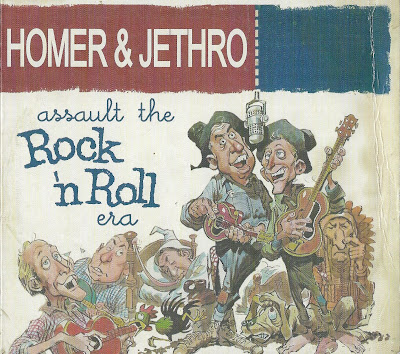 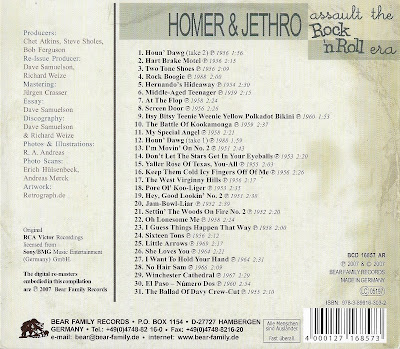 Just a Little Something To Warm Those Cold Bones We Are Having at the Moment with this Corona Virus. I Am One of those Persons At Home With Lockdown in Place.
I am Also Off Work (Past Two Weeks) And Im Bored to Tears!!.
So I Am Giving You This Great Funny Parody of Rock And Roll From Homer And Jethro.
And We Will Get Through This...
Enjoy

The premier hillbilly parody act get the Bear Family Records red carpet treatment with this CD reissue of the label's 1989 vinyl compilation. Now expanded to a whopping 26 tracks and including a tome of a booklet that features a fulsome biography, track recording details, and song lyrics, Assault the Rock & Roll Era is the ultimate compilation. The duo of Henry "Homer" Haynes and Kenneth "Jethro" Burns began playing together back in 1936, but the opportunity to record their own music didn't come for a decade, when they eventually inked a deal with the King label. Old friend Chet Atkins brought the duo with him to RCA Victor, to which the pair, after freeing themselves from King, signed in 1949. Atkins would play on many of the pair's early recordings, going on to produce them later in the '50s. Their early material perfectly lampooned both country and pop numbers, but with the rise of rock & roll, Homer & Jethro quickly expanded their repertoire, to devastating effect. Sly, wry, and always witty, the pair's lyrics were invariably laugh-out-loud funny, whether turning Elvis Presley's "Heartbreak Hotel" into a flea-ridden roach motel, taking a girl in an "Itsy Bitsy Teenie Weenie Yellow Polka Dot Bikini" and dressing her in red flannels, or felling General Custer under a barrage of "Little Arrows." And while the pair inevitably gave every spoof they made a country twang, musically they lethally captured the sound of the original regardless of genre, from the note-perfect Chuck Berry-styled riff of "Middle-Aged Teenager" to the Beatles' jangling guitars on "She Loves You" and "I Want to Hold Your Hand." Pop music itself became ever more of a parody as the '60s wore on and, although the duo's fortunes continued to rise, they began lose much of their earlier vigor and edge. This compilation steps round that by focusing on the pair's '50 and early-'60s best (and includes their crossover hit "The Battle of Kookamonga" of course), with less than a handful representing their work later in the decade. For younger audiences, it would have been helpful to list the titles of all the songs that are lampooned within, but even without knowing the original, the humor still shines through. A superb compilation dedicated to a pair of America's funniest hayseeds.