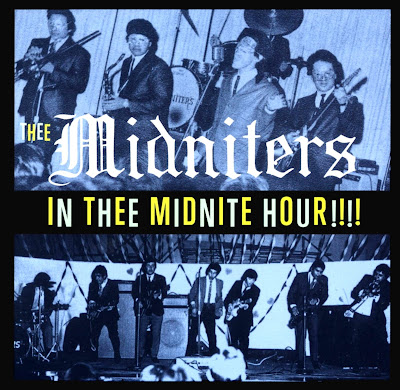 Thee Midniters are generally acknowledged to be the most fearsomely rockin' Chicano band to come out of the fabled East L.A. scene of the mid-'60s. Although their chart success was limited to their version of "Land of a Thousand Dances" (an extended live take of which is among the tracks included here) and they were beaten to the punch on that one by fellow scenesters Cannibal & the Headhunters -- the latter's version charted a month earlier and rose higher -- the rest of Thee Midniters' output leaves no doubt that they were the more ferocious band. A few fine collections of the group's limited output on such labels as Whittier and Chattahoochee have previously found their way to market, but Norton typically ups the ante with the most comprehensive set yet, accompanied by exhaustive liner notes by Domenic Priore and a slew of great vintage photos. Although Thee Midniters were known primarily for their sizzling covers of then-current rock & roll and R&B hits, the majority of the tracks here are originals, written by various combinations of bandmembers. The originals (especially "Whittier Blvd." and its cousin, "Down Whittier Blvd.") and covers both show a heavy allegiance to funky soul of the Stax and Motown varieties (great covers of the Contours' "Do You Love Me" and Barrett Strong's "Money"), as well as happening bands like the Rolling Stones ("Empty Heart") and Them ("Gloria"). On both "Everybody Needs Somebody to Love" (Stones via Solomon Burke) and their insane blast-out on the Mitch Ryder medley of "Devil with a Blue Dress/Good Golly Miss Molly," Thee Midniters are simply on fire. On occasion, the group showed a tendency to veer off into what would soon morph into psychedelia, but most of these 19 tracks, cranked to the max with blessed distortion, are unscathed, gritty rock & roll. 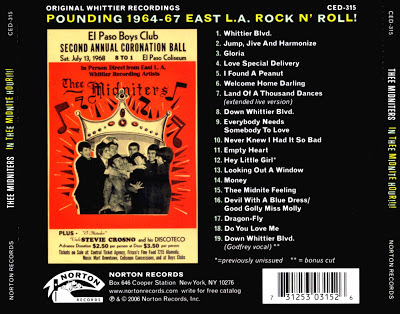 "  When the British Invasion took the world by storm in the 1960s, it went largely unnoticed in East Los Angeles, save for a band of young, Latino musicians. Thee Midniters took to the new rock and soul sound with a fervor, mixing it with psychedelia, big band jazz and some of their own traditional Mexican folk and found themselves heralded as America's first Latino rock band, continuing to influence acts to this very day. Their music, history and impact are the subject of a new 4-CD box set, Thee Complete Midniters: Songs of Love, Rhythm & Psychedelia! The collection features all full-length albums recorded by Thee Midniters, as well as singles that were never included on the LPs and rare tracks that have never been available on CD before.
Musicologists often refer to Thee Midniters as the archetype Latino rock band, but the group's musical eclecticism is as much a cross cultural affair as the dynamic era it grew out of. "The '60s weren't segregated," Thee Midniters bassist Jimmy Espinoza said in an interview with writer Richie Unterberger. "The '60s were integrated. The whole 'peace, love, black, white, brown, we're all the same': that's who we were. We were a crossover group, and we really loved it. It's extremely frustrating for me to get put into the Latin bag, because Thee Midniters aren't."