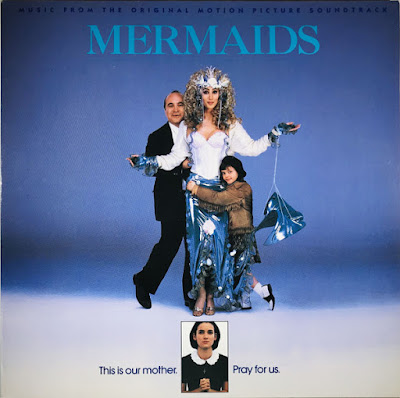 Music From the Original Motion Picture Soundtrack - Mermaids is the soundtrack album from the film Mermaids starring Cher, Winona Ryder, Christina Ricci and Bob Hoskins.
The Mermaids soundtrack was released in Europe on November 13, 1990, and on December 8, 1990, in the U.S. The album also peaked at number sixty-five on the Billboard 200. Two singles, both recorded by Cher, were released to promote the soundtrack: "Baby I'm Yours" (originally recorded by Barbara Lewis), released as the first European single, and the worldwide hit "The Shoop Shoop Song (It's in His Kiss)" (originally recorded by Betty Everett), which was released as the second European single. It was also Cher's first single from her album, Love Hurts. In the U.S., "The Shoop Shoop Song" was the first single from the soundtrack.
"Baby I'm Yours" was not a success, only reaching number eighty-nine in the UK Singles Chart. However, "The Shoop Shoop Song" was a worldwide hit, becoming Cher's second number one hit in the UK. The song also peaked in the top ten of almost every European country, but failed to receive much attention in North America, peaking at number thirty-three in the U.S. and number twenty-one in Canada. Although the success in mainstream airplay was not as strong in North America, the song did receive strong adult contemporary airplay in both the U.S. and Canada, peaking at number seven in the U.S. Adult Contemporary chart and number four in the Canadian Adult Contemporary chart.
https://wiki2.org/en/Mermaids_(soundtrack)
01. Cher - The Shoop Shoop Song
02. Frankie Valli & The Four Seasons - Big Girls Don't Cry
03. Smokey Robinson & The Miracles - You've Really Got A Hold On Me
04. Lesley Gore - It's My Party
05. Shelley Fabares - Johnny Angel
06. Cher - Baby I'm Yours
07. Doris Troy - Just One Look
08. Mickey & Sylvia - Love Is Strange
09. Santo & Johnny - Sleepwalk
10. Jimmy Soul - If You Wanna Be Happy 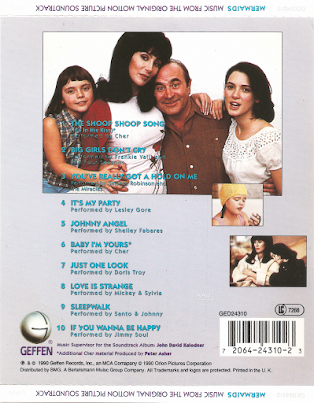