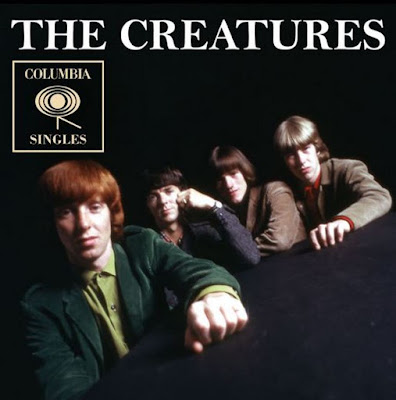 The Creatures were a band out of Dublin, Ireland during the mid-1960s, and are considered, arguably, the most important Irish beat group, and one of the first to score international success. Formed in April 1965, the band consisted of Liam McKenna (rhythm guitar, vocals), Brian Harris (lead guitar), Frank Boylan (bass), and Ray McDonald (drums).
The Creatures played a lot of the Dublin clubs during 1965, building a following. The band was managed by Brendan O’Brien and then Kevin Dunne, and were spotted by Neil Levenson while performing at the Locomotive Club in Paris in August 1965. Levenson, a staff producer at Columbia Records in New York, arranged for some demo recordings to take place. In one 3 hour session the band recorded 10 songs which led to the band signing with Columbia Records USA.
In 1966, The Creatures traveled to America for a promotional tour, staying for an extended period of time. During their stay, the band made several recordings with Levenson, resulting in four singles. All four were released in the US, and three were released in Ireland and the UK. Their debut single was “Turn Out The Ligths” which was credited to D. Lindsay, believed to be Derry Lindsay. The single was released in early 1966, first released in the US and then the UK and Ireland. The song was a big hit back in Ireland, even though it was banned by RTE Radio because of the slightly risque lyrics. The single failed in the US and even the band’s performance at the Columbia Records Convention couldn’t help it. The Creatures followed up with Levenson’s “String Along,” but this also failed to find success in America. Two more singles were released with little results.
Late 1966 saw the band return to Ireland. McKenna brought back with him two songs from the demos they listened to in New York while selecting material to record. Both were Levenson compositions and were recorded by The Deep Set who landed a hit in Ireland. The New York lifestyle the band had developed did not appeal to every member, and McDonald took this opportunity to leave. He was replaced by Fran Byrne, previously of The Chosen Few.
Capitol decided not to renew their one year option with the band, and in 1967, they followed The King Bees to Germany, playing the Hit Club in Hamburg. This trip was filled with problems, culminating with their manager, Pat Fay, taking their work permits back to Ireland by accident. In August 1967, their was an unspecified incident with UK customs in London, causing a minor scandal when it was released in Irish papers. Bookings began to become few and far between, so The Creatures split in September 1967.
Boylan, McDonald and Harris all went onto join Ditch Cassidy & The News. Harris joined The Gentry and Cotton Mill Boys. Boylan later joined Mellow Candle and later the Garry Moore Band and Chips. McKenna joined The Real McCoy and later played with The Memories. Byrne became a member of The Sands.
http://www.irishrock.org/irodb/bands/creatures.html
http://www.irishshowbands.net/bgcreatures.htm
https://rockroots.wordpress.com/2011/10/13/the-creatures/ 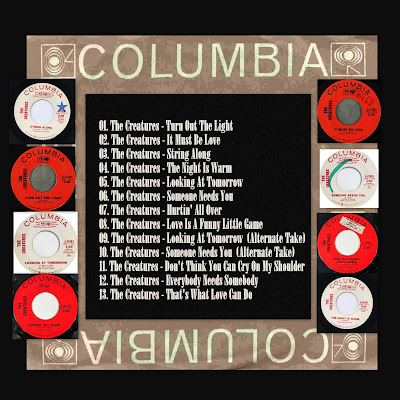