Kathe Green - Run The Length Of Your Wildness 1969 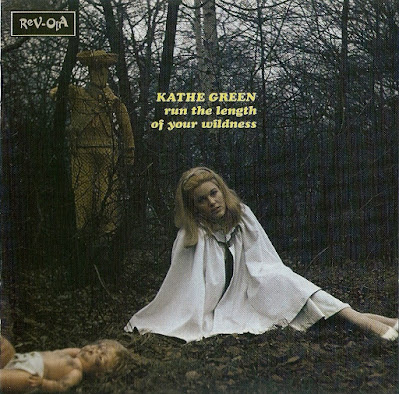 Kathe Jennifer Green
Kathe Jennifer Green (born September 22, 1944) is a Californian actress, model and singer. She is the daughter of composer and conductor Johnny Green
Kathe Green appeared in Blake Edwards's 1968 film The Party, and then dubbed all of Mark Lester's singing voice in Oliver!.[1] She signed to Deram label and used a line of poetry bestowed on her by close friend Richard Harris as the title for her album Run the Length of Your Wildness. Released in 1969, it was a collaborative effort with orchestral arrangements handled by John Cameron and production by Wayne Bickerton. The album produced one single, Primrose Hill, released the same year on Deram.
In 1971 she recorded the song "Marianne", which was played over the opening credits to the film Die Screaming, Marianne, starring Susan George. Green recorded for the Motown label in the mid-1970s, but afterwards stepped away from the music business. 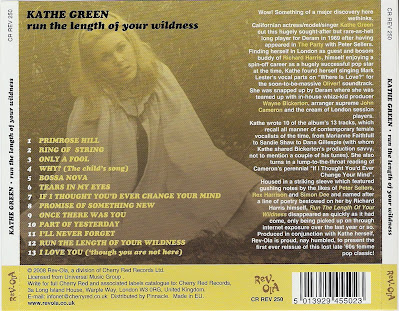 Something of a major discovery here we thinks. Californian actress/model/singer Kathe Green cut this hugely sought after but rare-as-hell long player for Deram in 1969 after having appeared in’the Party with Peter Sellers.
"Finding herself in London as guest and bosom buddy of Richard Harris, himself enjoying a spin-off career as a hugely successful pop star at the time, Kathe found herself singing Mark Lester'svocal parts on Where Is Love? for the soon-to-be-massive Oliver soundtrack. She was snapped up by Deram where she was teamed up with in-house whiz-kid producer Wayne Bickerton, arranger supreme John Cameron and the cream of London session players. Kathe wrote 10 of the album's13 tracks, which recall all manner of contemporary female vocalists of the time, from Marianne Faithfull to Sandie Shaw to Dana Gillespie (with whom Kathe shared Bickerton'sproduction savvy, not to mention a couple of his tunes). She also turns in a lump-to-the-throat reading of Cameron'sperennial If I Thought You d Ever Change Your Mind.
Housed in a striking sleeve which featured gushing notes by the likes of Peter Sellers, Rex Harrison and Simon Dee and named after a line of poetry bestowed on her by Richard Harris himself, Run the Length Of Your Wildness disappeared as quickly as it had come, only being picked up on through internet exposure over the last year or so. Produced in conjunction with Kathe herself, Rev-Ola is proud, nay humbled, to present the first ever reissue of this lost late 60s femme pop classic!"
( http://www.cherryred.co.uk/revola/artists/kathegreen )
Thanks for this Dusty and Marios (Rockasteria)