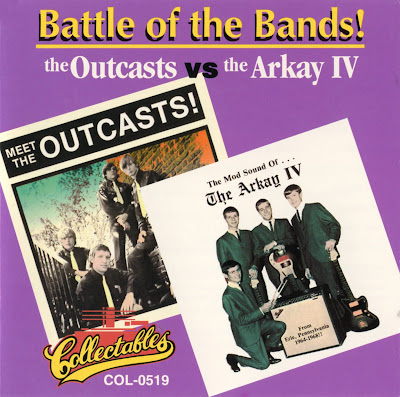 BATTLE OF THE BANDS!: THE OUTCASTS VS THE ARKAY IV
CD f including 14 crude 1966 - 1968  garage  rock cuts by the Arkay IV from Eerie, PA. plus 12 moody cuts by the Outcasts from New Jersey!
The Outcasts
One of several American garage bands to use the Outcasts name in the '60s, this Long Island, NY outfit was a very typical act of the era, performing the usual garage raunch, White soul, Monkees-like pop, and Donovanish flower power. They only issued two singles, but an entire album of material was fabricated for release in the 1980s by embellishing the officially released cuts with live performances and previously unreleased songs. Archival diligence notwithstanding, it's not worth tracking down, even for garage diehards.
The Arcay IV
Arkay IV were a Pennsylvania-based Garage Rock outfit that put out one record and a few singles during the late '60s. They originally began with heavy leanings towards the Merseybeat sound, but evolved into a more soul and pop-oriented group. Considered lightweight, they still had a knack for melodies and a penchant for moody organ   sounds. ~ by Richie Unterberger 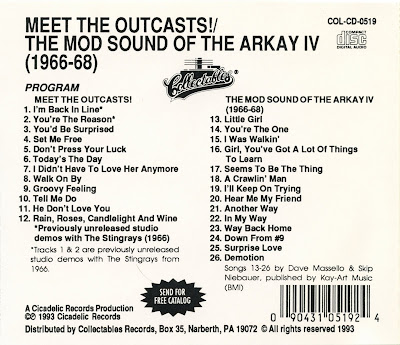