The Shades Of Blue - Golden Classics 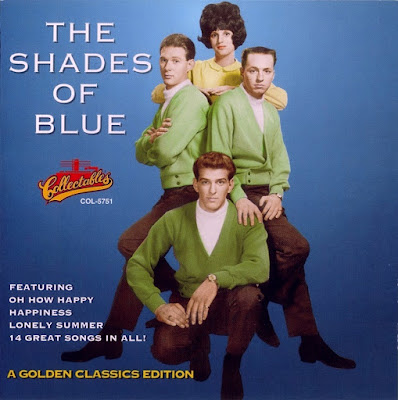 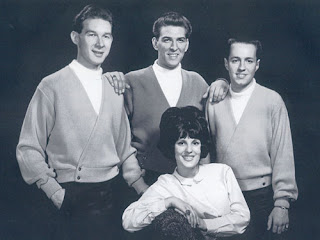 The Domingos formed while in junior high in 1961. The lineup consisted of Nick Marinelli (lead), Bob Kerr (baritone), Ernie Dernai (first tenor), and Dan Guise (baritone). All lived in Livonia, a suburb of Detroit, Michigan. Bitten by the Motown sound and the predominance of R&B emanating from Detroit radio stations, they fashioned themselves after the top acts and began doing talent shows and dances. They gigged without recording for five years. Marinelli started college, Guise disappeared, and Kerr and Dernai also started college, but at a distant university, and the group was limited to singing on weekends. They befriended members of the Reflections ("Just Like Romeo and Juliet"), also from Livonia, who encouraged them to audition for Ed Wingate's Golden World/Ric Tic Records, where they recorded. Linda Steinberg, who attended the same college as Marinelli, took Guise's place and soon became Mrs. Bob Kerr.
The last thing Ed Wingate wanted to see was another blue-eyed soul group. He had already signed and released records by Flaming Ember and the Reflections. The Reflections in particular had given him headaches. The Reflections disliked the way they were being recorded and their producers, mainly Bob Hamilton, and his brother Freddie Gorman (Originals), who insisted on heavy falsetto usage on their recordings, which they hated. Still, Wingate allowed the Shades of Blue to hang around and cut demos. One day while woodshedding on a song Edwin Starr had started in the military, they came up with a finished "Oh How Happy." Young and naïve, they knew little about songwriting credits, so the only name listed is Charles Hatcher, Edwin Starr's birth name; this became a sore point later. While Wingate wanted no part of them, independent producer John Rhys was there when the guys were working with Starr and liked the song and the group.
And why not? They harmonized like birds, and could doo wop down. Rhys is credited with renaming them the Shades of Blue, and taking their master to Impact Records. Rhys also worked with the Newbeats. The Shades of Blue were all in college when "Oh How Happy" shot up the charts, cracking the Top 20 and nesting at number 12 pop in 1966. They quickly assembled management and a band, and hit the road for a year, appearing on Dick Clark's Caravan of Stars and at other venues. On off days they recorded their first and only album for Impact, the self-titled Happiness Is the Shades of Blue. Subsequent releases charted but not very high. "Lonely Summer," written by Edwin Starr, had all the charm of "Happy" but stalled at number 72; and "Happiness," composed by John Rhys, slotted six rungs lower at number 78. As for the LP, the two cuts were written by Edwin Starr and Rhys wrote a handful, including his most famous "He Got the Whole World in His Hands"; the Shades of Blue composed one selection, "Night." While they made money on the road, they didn't see any royalties and felt cheated after talking with other artists. So, by 1969, approximately three years after they started recording, they called it quits. Most of the members still live in the Detroit area, working in various occupations.
http://sobentertainment.com/index.html
===========================================
The Shades Of Blue - Golden Classics
01 - Oh How Happy
02 - Happiness
03 - Lonely Summer
04 - Little Orphan Boy
05 - He's Got The Whole World In His Hands
06 - Exception To The Rule
07 - A Way To Love
08 - The Night
09 - With This Ring
10 - You Gave Me Peace Of Mind
11 - Millionaire
12 - Penny Arcade
13 - All I Want Is Love
14 - Funny Kind Of Love
Review by Al Campbell
As part of Collectables' Golden Classics series, Shades of Blue are spotlighted on previously released material originally recorded for Impact in the '60s. The 14 tracks include "Funny Kind of Love," "All I Want Is Love," "He's Got the Whole World in His Hands," and their biggest hit, "Oh How Happy." Considering the obscurity of CDs available by the vocal group, this affordable disc should please both casual fans and collectors. 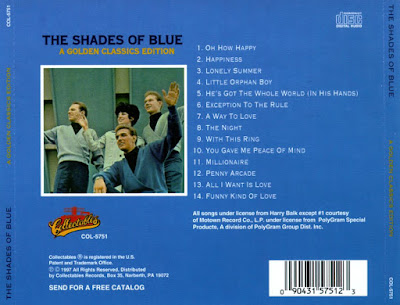